Home Reta's Reflections An Open Door in the Sky: Revelation 4:1–5:4 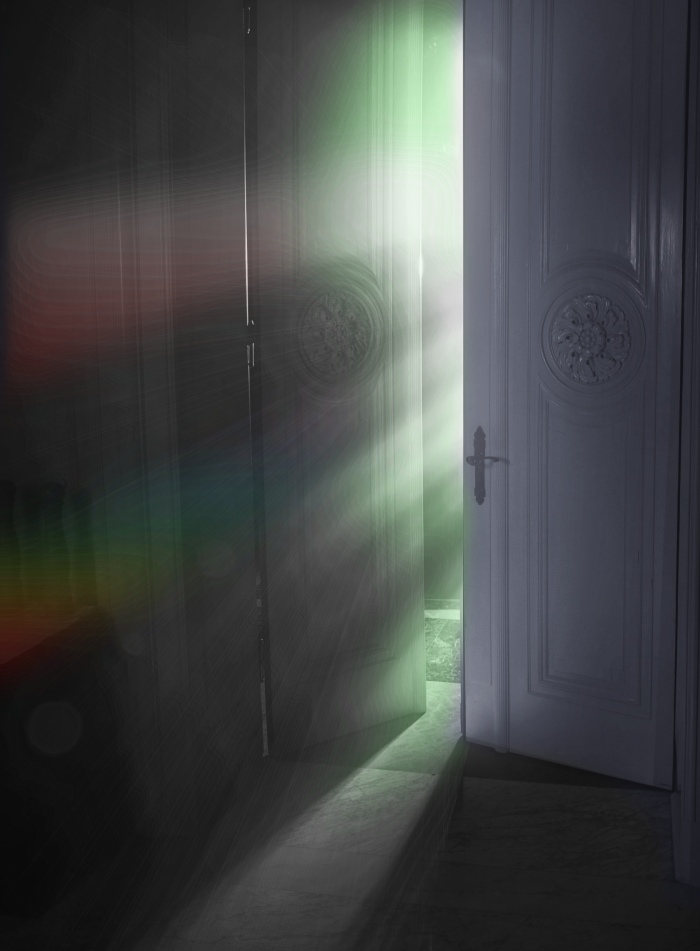 “After this I looked, and there in heaven a door stood open!” If John’s first vision in Revelation is set on earth in Asia Minor in the Roman Empire, this one must have blown his mind. It is one thing to have Jesus visit you and walk among your earthly churches in Asia Minor in the Roman Empire. It is quite another to peek through an open door and look into heaven itself! Then a voice like a blaring trumpet invites John to “Come up here, and I will show you what must take place after this” (4:1).

In Revelation 4:1–5:4, what materializes before John is a great throne with someone seated upon it whom he cannot describe except through symbols. The whole scene throbs with activity. Around the throne are twenty-four elders seated on smaller thrones. In front of the throne burn seven flaming torches, which John interprets as “the seven spirits of God” (4:5). Also around the throne are “four living creatures” who resemble a lion, an ox, a human face, and a flying eagle” (4:7).

What does it mean?

Although chapters 4 and 5 comprise a single unit in this second vision (a vision that runs through chapter 11), we need a little time to adjust our eyes and ears to this scene so foreign to our contemporary experience. Actually, throne-room depictions were quite common in the ancient world. We find several in the Hebrew scriptures, as well as images of the Roman imperial court. In 1 Kings 22:19, the prophet Micaiah says, “I saw the Lord sitting on his throne, with all the host of heaven standing beside him, to the right and to the left of him.” The prophet Isaiah names the year in which he “saw the Lord sitting on a throne, high and lofty; and the hem of his robe filled the temple” (Isaiah 6:1; see also Ezekiel 1:26 and Daniel 7:9). The Roman emperor also held court with attendants surrounding his throne. Lesser kings in attendance would at times offer golden crowns to the emperor.

Revelation 4 clearly projects God’s power and majesty above all earthly rulers. At the same time, God is not portrayed in human form, consistent with Hebrew law forbidding the carving of graven images. Rather, God is “like” two precious stones, jasper and carnelian (4:3). In his book, Breaking the Code, Bruce Metzger explains that jasper is translucent, projecting beams of light like crystal to emphasize God’s holiness. Carnelian’s deep red color suggests to Metzger the burning wrath of God against sin. Complementing this, a restful emerald rainbow (v. 3) brings to mind God’s covenant of mercy, promising never again to destroy the whole earth by flood (Genesis 9:8-17).

Though John does not explain who the 24 elders are, the number 12 stands for Israel, which may include the 12 tribes plus the 12 apostles. The elders’ white robes symbolize purity and victory, and their golden crowns represent their share, through grace, in God’s reign. The “four living creatures”—a lion, ox, human, and flying eagle—may symbolize all of creation. Here John is clearly drawing from a longer description of these same creatures in Ezekiel 1:5-25. Their six wings are also like the six-winged seraphs in Isaiah’s vision (Isa. 6:2-3).

The rest of Revelation 4 describes the unceasing worship given to the One on the throne by the elders and the living creatures. Like Isaiah’s seraphs, they sing “holy, holy, holy, the Lord God the Almighty, who was and is and is to come” (4:8). This is only the first of the many hymns of worship and praise that characterize Revelation. As Michael J. Gorman puts it, “The worship of God is the heartbeat of the cosmos, even when we humans on earth do not see it, participate in it, or value it. Only God is worthy to receive what others, especially powerful political figures, may want or demand: our total devotion, our praise, our crowns” (Reading Revelation Responsibly, p. 107).

John’s sky vision continues in Revelation 5, but now there is new action. He notices that the right hand of the One on the throne is holding a scroll, written on both sides (very unusual for a scroll), and sealed with seven seals. For confidential or official letters, a lump of wax or clay was pressed against the knot where the string around the scroll was tied. Then the writer would make an imprint on the wax with his signet ring. A scroll with seven seals means it contains extremely sensitive material.

After a mighty angel loudly asks who is worthy to open the scroll and break its seals, no one answers (5:1-4). What does the scroll symbolize? The scriptures? A legal document? Most likely it contains the events that will happen throughout this second vision of John’s, like a DVD or cell phone that contains videos that will reveal themselves only by someone with the right password. But no one in heaven or on earth is able to open the scroll, so John weeps “bitterly” (5:4).

The next lesson will continue the narrative and reveal the interpretive key to the entire book. Chapters 4 and 5 together, as Gorman puts it, “reveal in pictures the essential theology of the book of Revelation” (p. 103).

Questions for reflection or discussion: