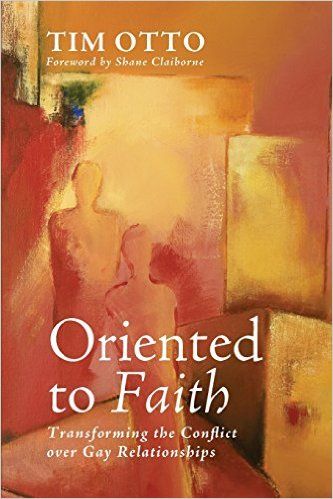 Tim Otto, a celibate gay man, serves as pastor of the Church of the Sojourners in San Francisco (unrelated to the Sojourners who publish a magazine by that name).  Otto’s celibate lifestyle is the result of the consensus of his live-in church community.  In this way he demonstrates one result of the thesis of his book, Oriented to Faith: that God is at work transforming the church through the debate about same-sex marriage; and by supplying genuinely loving familial support for its LGBT members, the church can “show we are Christians by our love.”

The title Otto has chosen is extremely appropriate: since sexual orientation is a minor matter in the Bible, the church needs to become oriented to its faith in Christ rather than oriented to arguments about same-sex relationships.

Otto foresees that some congregations may “orient to faith” by speaking against our culture’s idolatry of romantic love and self-fulfillment and yet being very supportive of the celibate LGBT’s and other single people among them.  Another group of congregations might adopt an affirming stance toward gay love, honoring the unions of same-sex and other-sex alike, but encouraging covenantal fidelity for every union.  Yet another group of congregations might have “traditionalists” and “affirming” branches who live in fellowship with one another and give encouragement, friendship, and accountability to celibate singleness and marital faithfulness within any orientation (p. 116).

By now it should be clear that Tim Otto does not believe that individual Christians have the right to decide for themselves whether marriage or even civil union is appropriate for them.  He takes issue with John Alexander’s concept of FIRE: freedom, individualism, rights, and equality.  (Freedom would require that we allow others to love whomever they want; individualism would require us to honor the differences of LGBT people; respecting rights would affirm marriage for anyone who wants to enter into it; and equality would put gay love on par with “straight” love).  On the contrary, Otto defines true Christian freedom as “restriction of the self for the good others” (p. 70); individualism as denying the corporate communal nature of Christian congregations; rights as something Christians give up on behalf of others, just as Jesus “emptied himself” and took the form of a slave; and equality as a dangerous refusal to heed the wisdom of others (pp. 70-73).  Otto concludes that “If it comes down to a choice of listening to ourselves, or Christian tradition and Scripture, we ought to listen to the latter” (p. 73).

With this assertion Otto turns a blind eye to the egregious injustices of Christian tradition—the racist upholding of slavery; the sexist androcentrism of roles and language; the triumphalism that rejects insights from other traditions; the lack of concern for the poor, the widows, and the children that Jesus loved; and so forth.  His definition of freedom as giving the needs of others priority over our own needs ignores the basic injunction of Moses and Jesus that we should love others as we love ourselves (not more than we love ourselves).

Otto’s forgetfulness of the egalitarian Golden Rule leads him to make a truly irrational connection.  Because “male and female bodies fit together,” males and females are obviously “meant for each other” (p. 86).  And heterosexual marriage symbolizes the “great mystery” of Christ’s union with the church (Eph. 5:32).  Therefore, Otto reasons, “the bringing together of difference reveals a concrete example of God’s nature”: three different persons in one Trinity (p. 87).  Alas, has it evaded Otto’s notice that the traditional Trinity is made up of three male persons?  How then can the marriage of male and female be the best way to embody the mystery of three male persons “living in perfect unity”?

Furthermore, since the apostle Paul wished that Christians would remain unmarried like himself (I Cor. 7:8), why is heterosexual marriage so highly honored in Otto’s congregation?  If celibacy is not a superpower but an ordinary gift from God, as Otto argues, wouldn’t celibacy for everyone be the biblical ideal?  Why require celibacy only for single folks, except for those occasions when married couples are trying to have children?

Otto tries to avoid injustice by suggesting that all traditionalist Christian congregations should support heterosexual marriage for LGBT people (p. 94).  As someone who has felt uneasy all her life for marrying heterosexually despite full awareness of my homosexual orientation, I question the integrity of urging people to marry in opposition to their own orientation.  Such an act smells like “usage”; certainly it does not resemble loving the other as one loves oneself!

Perhaps the most far-reaching problem with Tim Otto’s book is his assumption that it is impossible to achieve an accurate interpretation of the Bible.  Very impressed with postmodernism, Otto is certainly correct that “the voice of the ego [can be] mistaken for the voice of the divine” (p. 104).  For Otto, “understanding the world and morality demands faith—a leap beyond certainties and proofs” (p. 66).  Arguments on both sides of cultural issues are misshapen by Enlightenment concepts, so that both sides avoid “the humility of faith” (p. 68).  Thus Otto implies that no reading can be any more accurate than any other.  Nevertheless, Christians are supposed to obey “Christian tradition and Scripture” rather than our own consciences.  How is it possible to obtain clear guidance from tradition and Scripture, when the tradition is polluted and accurate interpretation of Scripture is impossible?  But the fact is that paying attention to literary context, to historical backgrounds, to changing definitions of words, to the genre (literary type) being utilized, to the tone of the passage, etc., can all help a reader avoid “reading in” to the Scriptures and instead to perceive what the intentions actually were.

So: God bless Tim Otto for sacrificing the companionship of a gay partner in order to fit in with his congregation’s communal decision.  And God bless Tim Otto for working fourteen years in the AIDS ward of San Francisco General Hospital.  And God bless Tim Otto for writing this book in the hope that each Christian will “go through the difficulty of relating to people who are not like us” (p. 118).  But his failure to envision freedom, individualism, rights, and equality in the light of the Golden Rule tragically weakens the power of this book.  Because forcing ourselves to subordinate our needs to everyone else’s has been the assigned role of women for centuries of Christian tradition, we feminists are quick to recognize the pitfalls of attempting such self-sacrifice.  To paraphrase Rabbi Sofer, no person is required to build the world by destroying himself or herself.

The revolution that modern Christian congregations need is simply for each person to reconcile with others by doing unto those others what we want for ourselves: listen, be respectful, and act in faithfulness to our own integrity.

A Tiny Little Girl and a Smiling Man – #YesAllWomen