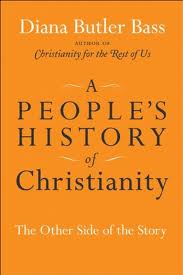 Diana Butler Bass’s A People’s History of Christianity is a welcome and long overdue revision to the “orthodox” history of Christianity with its narrow focus on creeds, councils, and winners. Providing a nuanced work, including persons (often women) usually overlooked and dismissed, Bass brings to light the ways in which these previously disregarded people were important shapers of Christian history and tradition.

Here Bass draws on her training as a church historian, along with inspiration from other recent studies, as she seeks to construct a fuller and more accurate understanding of the church from the underside. This one-volume study will readily become standard fare for introductions to church history.

Bass explains the rationale for this book in her introduction by asserting, “The usual story is that of ‘Big-C’ Christianity—Christ, Constantine, Christendom, Calvin, and Christian America” (p.4). Portrayed as morally righteous and right, this version—one focusing only on the winners—is also militant and often arrogant. Yet, as Bass points out, this is not the totality of the Christian story. There also have been and continue to be people who strive to follow Jesus, even—and especially—when this involves counter-cultural living.

Using the term “generative” to describe this aspect of the Christian movement, Bass argues her book “is about memory found and the ways in which Christian history tethers contemporary faith to ancient wisdom” (p.10). Taking Jesus’ great commands—to love God and neighbor—as her rubric for the book, she organizes each major time period around two overarching themes: devotion and ethics.

The Beginning
Beginning with early Christianity (100-500 CE), Bass argues the first followers of Jesus understood their task to be a way of life. In other words, this nascent movement succeeded not because of adherence to strict doctrines or a promised salvific future, but rather because this way of living transformed people while simultaneously challenging traditional Roman values.

These first Christians understood love of God as imitation of Christ and as such, some of them, like Perpetua and Felicitas, willingly died as the ultimate expression of that imitation. And yet, Bass explains, this was not a band of followers seeking to deny their bodies. Drawing on insight from Irenaeus that often goes unexplored, she explains his idea of deification and the counterpoint this offered to Gnostic groups, some who did not honor the material world.

Bass ensures that many of the usual players in this story are included and here references not only Irenaeus, but also Origen, Clement, Antony of Egypt, the Cappadocians, John Chrysostom, Constantine, Ambrose, Augustine, Tertullian, and Justin Martyr. At the same time, though, the narrative’s focus is not doctrine so much as how the ideas of each influenced their living. Thus, more attention is given to living peacefully, and scant mention is made of ecumenical councils.

The Medieval Period
Medieval Christianity (500-1450 CE) is the second part of this history. Using the cathedral—spiritual architecture—as her organizing principle, Bass invites the reader to understand this period of history as “a confluence of diversity and local custom” (p.89). As a visual representation of such meeting of two worlds, the cathedral serves to illuminate how medieval people lived in light of these two realities.

Whereas Celtic Christianity usually receives cursory attention, Bass begins her explication of medieval devotion with the story of Patrick arriving in Ireland and the corresponding ideas of pilgrimage and spiritual exile. While the Roman church may have contained and used its institutional power, the Celtic tradition simultaneously offered a repository of wisdom and spirituality.

Not surprisingly, Bass allows Julian of Norwich to figure prominently in this section and encourages the reader to explore a feminine image of God, as Julian did so long ago. Additionally, Abelard and Heloise garner attention as their relationship illustrates the place of passion, a path combining the robust quests of intellect and sensuality as a way that leads to God (although Christian tradition has often rejected the sensuality aspect).

Bass also uses her discussion of Abelard to explain the difference of atonement theories—a clear intention to debunk a common mistake made in many churches today who teach only blood sacrifice. And so she is clear to present Abelard’s model of Jesus as the ultimate example of love resulting in self-sacrifice in contrast to  Anselm’s idea that Jesus’ blood was required to satisfy God’s justice and rectify a broken situation.

Much of this medieval section, however, is centered on ethics; and Bass begins the discussion with the seventh-century advent of Islam forcing medieval Christians to ask themselves, “who is my neighbor?” In this context, Bass covers a myriad of figures ranging from Hildegard of Bingen, who includes the cosmos as neighbor; to Thomas Aquinas whose answer spurred him to consider the justness of war; to Francis of Assisi, who included attentiveness to animals; to the Beguines and Beghards, including Mechthild of Magdeburg and Hadewijch of Antwerp, who saw outcasts of society as neighbors; and Geert Groote whose experiment known as the devotion moderna exemplified Jesus’ call to share all things in common.

The Reformation Period
Part III covers the Reformation period (1450-1650 CE). Moving from an image of cathedral to one of word, the Reformation begins with the development of the printing press, the new technology of movable type. With centrality of word, Bass explains, “they developed a host of spiritual practices—reading, speaking, singing, teaching, and praying” (p. 162)—all aspects of proclamation. And yet in this new shift toward literacy, the seed for potential dispute was sown, indicated early on when Erasmus pointed out a biblical passage that had been mistranslated for ages (p.158).

Love for neighbor during the Reformation created a new opportunity to consider the motivation for such love. As Bass explains, during the Reformation a shift in ethics occurred from obligation to intention. Of course Bass provides appropriate attention to Martin Luther and John Calvin. But, continuing to allow previously absent people to contribute to the story, she also includes Katherine von Bora (who, after leaving monastic life, married Luther); Anne Askew and Janneken Munstdorp, who wrote their testimonies and were condemned for their beliefs; and the Anabaptists, often considered the radical wing of the Reformation.

The Modern Period
The Modern Period (1650-1945 CE), labeled “The Quest” by Bass, is Part IV. The quest is, of course, one for truth arising out of the context of optimism about knowledge, revolutionary change, and economic prosperity. During this period, theology “de-emphasized the supernatural aspects of faith, rebased faith on morality rather than doctrine, celebrated tolerance, and elevated the role of the natural world and humankind” (p. 216). As intellectual assent took center stage, light became a dominant metaphor for preachers and philosophers (p. 222).

Here Bass pays attention to the emergence of Quakers, including Margaret Fell; Juana Inés de la Cruz, a Mexican nun whose life exemplified the love of learning despite the church’s intimidation; the Methodist movement, including Jerena Lee, an African American Methodist preacher; and even Thomas Jefferson and Emily Dickinson.

Bass locates the ethics of the modern period in the ideas of tolerance, demonstrated in the recognition by some that acceptance of diverse views need not be seen as heresy at odds with theological purity; equality, as demonstrated by Maria Stewart, an African American and first woman to address a group of abolitionists; freedom, clearly illuminated by Harriet Tubman; community, explicated as “Christian socialism” by Vida Scudder; progress, framed by the argument over evolution; ecumenism, heralded by the 1910 Edinburgh Missionary Conference; and pluralism, illustrated by the 1893 World’s Parliament of Religions and the Chicago World’s Fair.

Contemporary Christianity
By using the image of a river, Bass astutely constructs Part V— the final segment, “Contemporary Christianity” (1945 to now) . This visual metaphor, one that is ever-changing, always moving, unpredictable, sometimes constrained by dams until it changes course, enables Bass to extend her methodology of history from the bottom up. She does so by allowing a few “ordinary” people to describe their current experiences and understandings of faith. And it is their stories, Bass argues, that constitute “the undertow of those quiet souls—some named, many unnamed—who have made the world a better place, as Jesus so instructed” (p. 309).

I imagine a common critique of Bass’s book will be that if this is the only book one reads, much of the traditional narrative about heroes, events, and theology will be absent. And this concern may be well-founded. Yet, as Bass contends, historical awareness is useful to the extent that it informs current faith expressions. In A People’s History of Christianity, by telling “the other side of the story,” Bass has provided a superb study, rich for contemporary consideration and application (as she models throughout the book). As such, I suspect despite these fears, her study succeeds—and little is, in reality, lost.

If Grace is True & If God is Love