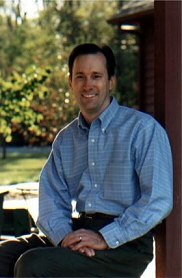 Philip Gulley, one of the speakers at this summer’s EEWC conference in Indianapolis, “A Place at the Table,” has not only written books about theology (such as those described in the preceding review) but is also an engaging story teller. Two examples are his Porch Talk, which contains thirty sketches describing some of his experiences as a Quaker pastor, and Home to Harmony, a novel, which contains 24 loosely connected stories from the experiences of Sam Gardner, a Quaker minister. Even though Home to Harmony is fiction, it feels as realistic as the stories in Porch Talk.

In both books, Gulley tells about memorable individuals, such as Charley in Porch Talk, the hardware store owner who dispenses hardware-type advice with your purchase at his store (“You will have to do that extra tight”), and Dr. Neely in Home to Harmony, who made the purchaser of his house—the new Quaker minister—promise not to paint the dining room wall so as not to cover the height markers of the Neely children. And in both books, each story usually ends with a moral, such as this one from “Better Late than Never!” (about the sermon on gratitude Gulley wished he could unpreach): “This is the irony of gratitude—we’re often less inclined to express it when, in retrospect, it is the most deserved.” 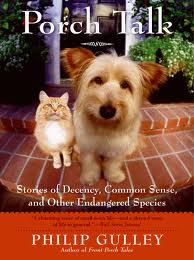 Both books are lighthearted and humorous—one reads them as one does a P.G. Wodehouse story, with a constant smile on one’s face and with anticipation of reading more the next day. Miriam, one of the members of Harmony Friends Meeting, has to go to the hospital for a week. As she is being wheeled out at the end of the week, a Catholic priest prays for her and her husband and rubs a little holy water on both of their foreheads. Miriam’s husband worries all the way home that they have been secretly baptized into the Catholic church. He had read stories in the newspaper of that happening.

The books are deceptively lighthearted, though, for there is a seriousness behind the humor. Gulley is dealing with virtues and lessons to be learned and ways of being good. Bob Siles, Jr., doesn’t like living in Harmony. Well, someone remarks, “If we can’t find joy where we are, we probably won’t find it anywhere.” 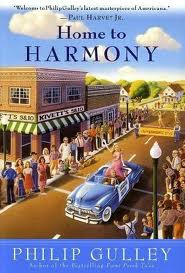 Though nothing in the two books is overtly feminist, Gulley treats all persons with respect. And Gulley himself supports some unpopular causes. In the interview on his website, he responds to the question, “What’s one thing that people may not know about you that might surprise them?” with “Though I’m a minister in a small, Indiana town, I am an ardent supporter of same-gender marriage.”

If you want to visit Phil and say hello, you can stop by Fairfield Friends Meeting near Indianapolis some Sunday morning. There will be a short sermon and a lot of quiet. He will greet you as you leave, and if you say you once drove through Harmony, he is likely to give you an impish grin which you will remember the rest of the day.