The Accursed: A Novel 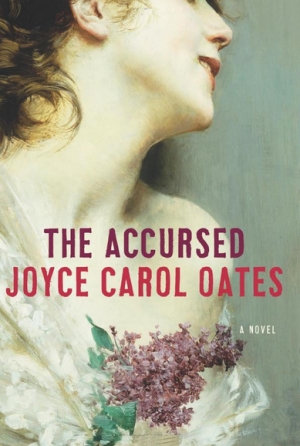 Stephen King proclaims that The Accursed “may be the world’s first post-modern Gothic novel.” The Gothic aspect is obvious: demonic incarnations, swirling reptiles, vampires, mayhem. The post-modern label applies because so many of the events are “unspeakable” or simply ambiguous (did Todd Slade turn to stone, or just disappear? Was Anabel’s baby reptilian, or just badly disabled? Did Oriana jump to her death, or was she pushed?). For King, writing in The New York Times, the novel’s major theme is that “ambiguity is . . . the human condition.” For various reviewers on Amazon, The Accursed is “campy,” possesses “no plot,” and constitutes “a slog.” In one sense or another, all of them are correct.

The copyright page states unequivocally that references to real people, events, and locales are used to “provide a sense of authenticity, and are used fictitiously,” whereas nothing else is to be “construed as real.” But thereafter, Oates does everything possible to get the reader to forget that statement, opening with an “Author’s Note” that is signed by M.W. van Dyck II, who emerges as the somewhat wordy narrative voice throughout (although the voice is also somewhat ambiguous). There are citations of various non-existent books complete with publishing dates; there is a secret coded journal written by Adelaide Burr, whose code van Dyck claims to have cracked; there are footnotes and postscripts providing details that were left out of the main narrative; and there are discussions of the views of rival historians.

If all that is not yet enough to make your head swim concerning fact or fiction, it turns out that van Dyck II is the son of the famous pastor and author, Henry van Dyck; and Adelaide Burr is related to the famous Aaron Burr. Other characters include Woodrow Wilson, Grover Cleveland, Upton Sinclair, Jack London, Mark Twain, and Teddy Roosevelt. But there is also a demonic incarnation who uses the name of Axson Mayte, François D’Apthorp, Count English von Gneist, and even the author of the Sherlock Holmes mysteries.

Astonishing events abound in 1905-1906 as a sort of mass hysteria prevails in Princeton’s elite class. It is called the “Crosswicks Curse.” Its first public manifestation occurs when Anabel Slade marries Lt. Dabney Bayard in Princeton’s First Presbyterian Church, only to run off seconds later with a vampirish Axson Mayte. Eventually, Mayte takes Anabel to his Bog Kingdom in the New Jersey Pine Barrens, where his cast-off wives do all the dirty work in zombie-like fashion. Anabel is soon demoted to the zombie level but manages to escape. She bears Axson’s monstrous baby at home in Princeton, and mercifully the child is dead on arrival.

There are also some stunningly realistic scenes, such as when Woodrow Wilson’s distant cousin, Yaeger Ruggles, pleads with Wilson (then president of Princeton University) to speak out against the recent lynching of an African-American couple in Camden, New Jersey. Secretly, Wilson believes that the Ku Klux Klan is doing a good job of protecting the white race from “mongrelization,” so when he asks why Ruggles is being so insistent, he is met with an angry glare. Suddenly, he notices Ruggles’ darker complexion and kinky hair, and is shocked into questioning his own racial identity. But he soon puts the insight out of his mind and terminates Ruggles from his job as a Princeton University preceptor. Indeed, although Ruggles is fictional, the fact is that when Wilson became president of the United States, he did not appoint any “negroes” to office within his administration. He was also as deeply misogynistic as Oates portrays him, supporting women’s suffrage reluctantly only because it had become a political necessity.

I approached The Accursed with a strong hint from Joyce Carol Oates at the forefront of my mind. That hint appears just before the (factual) bibliography at the novel’s end:  “The truths of Fiction reside in metaphor; but metaphor is here generated by History” (p. 669). That the controlling metaphor was going to be theological seemed obvious to me because Oates dedicated the novel to two prominent theologians, Elaine Pagels and James Cone. And sure enough, the theological metaphor is driven home by the novel’s concluding sermon, “The Covenant.” Retired Presbyterian minister Winslow Slade had begun to preach this sermon when he was attacked by a giant snake that entered his mouth and silenced him after the first sentence. But in the written text of the sermon, Slade confesses that he had murdered a young millworker named Pearl and had remained silent when an innocent man was hanged for the murder in 1855. Slade admits that he is therefore responsible for the Crosswicks Curse and should not be forgiven. So I think Deborah Harkness is on the mark in her NPR book review when she states that the real monsters in The Accursed are the Princeton elite who preach without compassion because they have filthy secrets that they have refused to face. For Harkness, therefore, the controlling metaphor is that each of us must confront and confess the darkness within ourselves – the racism, the classist elitism, the religious prejudice, the misogyny, and so forth.

I agree with Professor Harkness, but I would go a step further. If the preaching of Slade and others had specified God’s wrath as focused on virulent racism, vampire upper classes sucking the blood out of poor workers, and the cruel subjection of women, the sermons might have been helpful. But in fact, as Winslow Slade confesses his own huge guilt, he also depicts God as monstrously evil: “For, my brethren, it is wickedness, discord, and terror that leads men to the Lord, in their broken souls; and in fear of his cruelty; and the terror of his gaping hell. For the happiness of the people is the curse of God. … For the misery of the people has long been the joy of the Lord … as only when they threw themselves prostrate before him in annihilation of their mutinous spirits … is the Lord God fulfilled, and his rage quelled” (pp. 657-658).

Thus, the God proclaimed by Winslow Slade is a mirror-image of the demonic Axson Mayte, hungry for blood and for the total submission of his brides, who are forced to live in the same “meekness, servility, unbridled fear and trembling’’ that Slade says is God’s will for humankind. Hence, the controlling metaphor of The Accursed would seem to be that as long as people believe God is angry, totalitarian, and brutally unforgiving, their whole world takes on a vampirish, bloodthirsty, fearsome coloration.

In our own day and time, with fear-mongering urging us toward renewed warfare and Christians like Rosario Champagne Butterfield proclaiming that God expects us to sacrifice our authentic natures in order to please Him, Joyce Carol Oates has given us a novel in which metaphor teaches a powerful and much-needed truth. Oates herself compared the unjust Woodrow Wilson’s “ordained by God” conviction to those of presidents “like George W. Bush” who seem “to have believed themselves involved in Christian crusades.” In an interview in The Daily Beast, Oates also says that it is the return of their repressed cruelty that causes “the incursions of nightmare figures like vampires and demons in the pristine white community.”

There is nothing easy about reading The Accursed, but the effort is immensely worthwhile. Oates forces us to struggle in order to see the metaphor that was “here generated by History.” But the struggle in itself is a metaphorical defense of the fine arts in an age when the arts are being devalued by greedy materialism.

We who love great art and work toward social justice owe Ms. Oates a debt of profound gratitude.