Home Book Reviews Queer Virtue: What LGBTQ People Know About Life and Love and How... 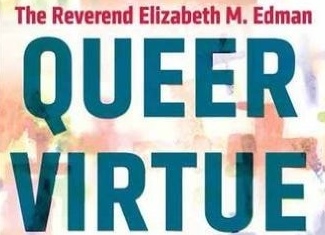 Queer Virtue, written by an Episcopal priest who delights in being both a priest and a lesbian, has two goals: first, that progressive Christians will insist on ending religious assaults on queer people; and second, that progressive Christians will recognize queerness as a way of infusing new life into our faith and our witnessing.  Since every page reverberates with vivid insights and suggestions for outreach, I predict that Edman’s goals will be met.

The author says she has personally experienced the truth of the Christian Gospel, especially by re-living Jesus’ final days in Jerusalem but also by living in the queer community.  So she builds her entire book around describing these two paths, the queer path and the Christian path.  Both paths lead individuals and communities to risk proclaiming their identities (“I am queer!” “I am Christian!”); to touch others despite risks to oneself; to navigate inevitable scandals; and to participate in a community that demands integrity, justice toward others, and a constant widening of the margins to take in those who had previously been excluded.

Knowing that most of her readers will be more aware of the risks and scandals of queerness rather than with those of the Christian faith, Edman spends much of her time explaining the scandals associated with Christianity.  These include rupturing many binaries that have been dear to human hearts, including the concept that God and humanity are separate and distinct (ruptured by Jesus’ being “fully God and fully human”); that life and death are opposites (ruptured by the dynamic tensions of death and resurrection); and that religious beliefs and practices create proper boundaries (ruptured by Jesus’ cosmic inclusion of human diversities).  As Christians and as queers, we are required to draw appropriate boundaries even while we are observing necessary interconnections.

Hence, Edman declares that “God queers our world, our lives, our hearts in order to set us free” (p. 24); so “Christianity is inherently liminal, inherently queer” (p. 28).

Edman writes with great skill, constantly tossing off phrases that ignite their target as they hit it.  For instance, she locates hope for prisoners not in the knowledge that one day they could be released, but rather in “the knowledge that some part of them wasn’t locked up” (p. 55).  Similarly, hope for diseased or disabled people is not the possibility that one day they may be cured, but rather that some part of us is neither sick nor disabled.  Edman then ties this rupturing of the hope vs. hopeless binary to Jesus’ making water (used for cleaning) into wine (used for conviviality).  At the wedding in Canaan Jesus “queered” those pots of water, turning fluid used to clean the hopeless into fluid celebrating a common hope.

Edman interprets Abraham’s almost-sacrifice of his son Isaac as Abraham’s already having come to trust God so thoroughly that “he knows instinctively that something else is afoot” (p. 62).  Thus she argues that Christian faith centers on “the boldest claim that human beings can make: that there is something at work that is bigger than we are, and the essence of that something is bound up in love” (pp. 62-63).  Similarly, the LGBTQ community has always had within our ranks “prophets of extraordinary moral courage” (p. 63).

Like the mature queer community, progressive Christianity simultaneously “sexualizes spirituality and spiritualizes sexuality” (p. 68).  So in progressive churches, we “touch the sacred” and feel an exciting and terrifying love.  And in Queer Pride marches, “our fabulously incarnate selves” are rendered visible (p. 76), despite the risk of rejection.

No one needs to be told that queerness can be scandalous and can cost a person her job, his home, even his/her life.  But Edman keeps reminding us that “Everything about Christianity is [also] scandalous, from the aftershock of God’s becoming a defenseless baby to the cosmic joke by which Rome’s most shameful instrument of torture becomes a mechanism of salvation” (p. 82).

In her chapter on Adoption, Edman remarks that “Queer identity may be discerned in relative isolation, but it comes to life in community” (p. 92).  My personal experience bears out the truth of this assertion, as it does of most of Edman’s statements.  I knew who I was before I attended the Gay, Lesbian, and Christian retreats at Kirkridge, but at those retreats I became vividly alive as both lesbian and Christian.  Why?  Because I had found a community that knew our “deep need of God and of one another” (p. 103).  Later, I found the same sense of passionate community in the Ecumenical and Evangelical Women’s Caucus (Christian Feminists Today).  Whether the emphasis was on queerness or on biblical feminism, the life-giving factor was mutually-vulnerable, mutually-supportive community.

Edman defines “Queer Pride” as being “all about a healthy relationship with Self, Other, and for many of us, transcendent reality” (p. 113).  That definition fills me with joy because she has effectively ruptured conventional judgments against healthy pride.  And when she calls upon progressive Christians and queers to “end our compliance with… spiritual violence by coming out of the closet,” investing in “the powers of love and faith,” I know that call is precisely right for both of my communities, the queer Christian community and the Christian queer (i.e., progressive) community.

In her chapter on Authenticity, Edman shows great courage by describing a major error that destroyed her ministry as Episcopal chaplain of Northwestern University.  During the extra-“marital”-affair that caused the break-up of her conventional relationship, Edman confesses, “Keeping power to myself caused me to lose the ethical perspective I had always relied on both as a lesbian and as a Christian” (p. 148).  And she comments brilliantly on Paul’s description of Christian community as the various parts of a human body (I. Cor. 12:14-21): “Paul’s message is explicit: we [Christians] don’t need one another simply to increase our numbers, we need others within the community to be different from ourselves…It is our privilege to find ways to grow from that diversity” (p. 150), always paying “close attention to the needs of those on the margins” (p. 152).

The most oppressive of human binaries is the one that differentiates between those who are in and those who are out.  Just as Jesus “took on whatever stigma was applied to the people he was engaging: women, children, Samaritans, lepers” (p. 180), so must progressive Christians and progressive queers continue to disrupt the inside/outside binary.  We could begin by handing Queer Virtue to anyone who is open to a joyously inclusive vision.

A Third Gender: Coming to a University Near You