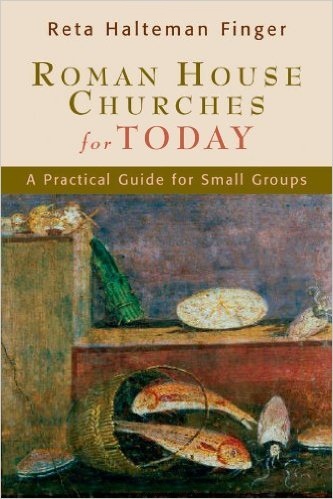 A geode, a friend once told me, is deceptive.  The plain exterior offers no hint of the complex beauty within.

Roman House Churches is not dissimilar. The pedestrian title of the book suggests that it might find a home among the many books awaiting disposition to discount-table purgatory.  This would be a tragedy, for the book brims with insights, enjoys rare clarity of expression, and effortlessly blends scholarship with pastoral sensitivity. I wish I had written this book.  I wish I could have.

Finger notes that most treatments of Romans approach the epistle as if it were primarily a theologically dense tome. It is this, she avers, but more.  G. B. Caird once observed that the earliest disciples first came to know Jesus as a man.  Only later did they come to see him as the incarnate Son of God.  Finger reminds us that the doctrinal message of Romans was experienced first as teaching applied to real-life situations, to house churches with slaves and masters, women and men, Greeks and Romans and Jews all sharing one faith in Christ.  Only later did it come to be seen as raw material for theology books.  In Finger’s words:

The intent of this book is to reflect on Paul’s letter to the Romans as if we really were these Christians at Rome.  Then, as we more clearly understand what Paul meant in the first century milieu, we are better able to translate his meaning into our context in the twenty-first century milieu. (p. 3)

The aim sounds simple, but its successful execution requires the completion of a multi-faceted task:  (a) to subject Romans to rigorous scholarly analysis; (b) to present the resulting insights in a way that is not only fresh but can be experienced; and (c) to present the gospel and the alternate community it prompted as the remedy for ethnic, class, and gender stratification in Paul’s world and ours.

After opening chapters on house churches, Roman religion, and Roman social relations (these economical treatments are among the finest I have encountered), Finger devotes the bulk of her work to a reading of Romans that combines theological, sociological, and rhetorical analysis.  All of this is done with an eye to the lived experience of the polyglot Christian communities to which Paul wrote.

She believes we learn best when scholarship is placed in harness with practice, so the book is structured to be read by individuals and groups engaging in role play.  She has even included ten pages of recipes so that a first-century agape meal can be recreated!

Finger wears her scholarship lightly.  Almost imperceptibly, she presses into service the literature concerning Paul’s mission to Spain, the complexities of the Roman patronage system, and obscure epigraphic studies pertaining to the occupations of Roman slaves.  The reconstructions of the various house churches are models of sober imagination.

The few infelicities (some Roman women did have the right to retain legal power independent of their husbands, for example) are of negligible import and warrant no further comment.  Finger has written a marvelous book that does more than combine scholarship with practice. It explains and understands the gospel Paul preached.