Home Reta's Reflections Romans 1:24-27 and Pornography: “God gave them up…” 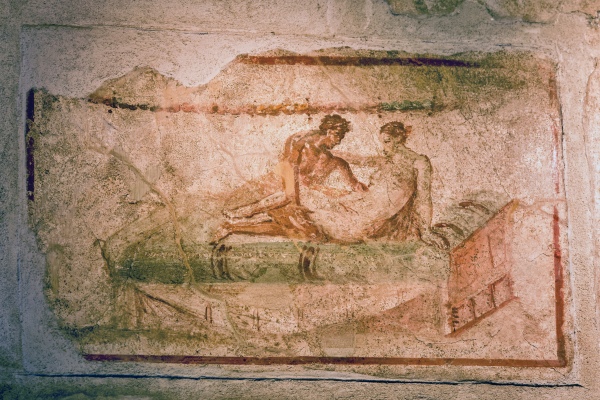 We saw in the last lesson how Paul described the out-of-control sexual behavior in Romans 1:24-27 as the result of Greco-Roman idolatry in 1:18-23. For an observant Jew like Paul, this defied the Second Commandment (Exodus 20:4) not to make an idol of anything above, on, or under the earth. But what direct connection is there between carved or painted images and the sexuality Paul describes in such negative terms as “lust,” “impurity,” “degrading” of bodies, and “shameless acts” in verses 24-27?

On a tour of Italy in 2001, I visited the well-preserved ruins of Pompeii, a Roman city engulfed by the massive volcanic eruption of Mt. Vesuvius in 79 CE. Excavated by archaeologists many centuries later, Pompeii vividly illustrates how upper-class Romans and their slaves and clients lived under the early emperors and during the Apostle Paul’s missionary activity.

With Israel living around such cultures, no wonder Yahweh forbade them to create images of their God!

Dominic Crossan and Jonathan Reed’s book In Search of Paul: How Jesus’s Apostle Opposed Rome’s Empire with God’s Kingdom (HarperSanFrancisco, 2004) explains the politics of male power and domination behind these sexual images. “For Rome,…normative sexual behavior was scripted according to power relations based on gender, age, and status,” they write, “with the adult land-owning male as the most powerful. We can…see that patriarchal-power nexus in the frequent depiction of the phallus as a magic-like symbol of power. It was used to ward off the evil eye, to protect houses from intrusion, and to ensure fecundity” (p 258). Private houses, such as those in Pompeii, had an erect phallus engraved or scratched by the entrance “to ward off curses or serve as good-luck charms” (p 259).  Sanctuaries and larger villas throughout the Mediterranean world were protected by herms, square bronze pillars with a bust of the god Hermes on top and his genitals protruding from the front of the pillar.

Relief carvings demonstrate political power and domination. In one, the Emperor Claudius, nude save for a helmet and flowing cape, stands over the female personification of Britain, ready to pierce her with his sword; in another, Nero conquers the naked body of personified Armenia (illustrations in Crossan and Reed on p 269). Sexual expression as mutuality and equality had no place in Roman culture. It is always portrayed as the domination of the older or superior male over socially inferior or younger persons of either gender. Greco-Roman culture was indeed hierarchical and bisexual.

I was stunned to realize that this is what Paul is talking about in Romans 1:24-27! A constant exposure to sexual images of pleasure, power, and domination lead to a search for new highs. Normal sexual relationships no longer satisfy, so people experiment with ever more exotic and abusive acts. Their punishment, says Paul, is that “God gave them up to the degrading of their bodies” (1:24) and “they received in their own persons the due penalty for their error” (1:27). In other words, the Jewish, law-observant Paul saw in the pagan Greco-Roman world a sex addiction that was not only shameful but ultimately led to an inability to experience normal sexual pleasure. James’s letter agrees. One is lured and enticed by desire, he says, “then, when that desire has conceived, it gives birth to sin, and that sin, when it is fully grown, gives birth to death” (Jas 1:14-15). The point here is not sexual orientation; it’s never-satisfied sexual addiction.

In the next lessons, I will use the work of several biblical scholars to do a detailed analysis of the Greek text of Romans 1:24-27, as well as discuss differences between marriage and family customs then and now.

1.  I have shifted the focus of Romans 1:24-27 away from its traditional, anti-homosexual interpretation. Is this appropriate? What do you think?

The Pastoral Epistles — Introduction and Questions of Authorship