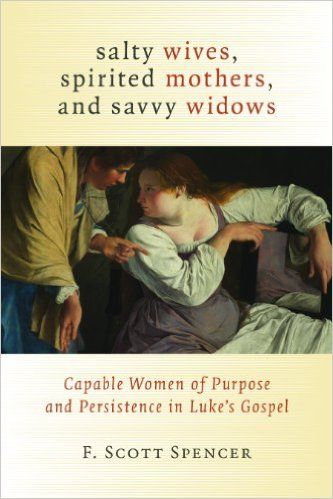 I’ve been a secret fan of F. Scott Spencer ever since I ran into his commentary on Acts while working on a major research project over a decade ago. His keen literary analysis and delightful turn of phrase, often combined with humor, brought Acts alive for me in a new way. That led me to his Dancing Girls, Loose Ladies, and Women of the Cloth: The Women in Jesus’ Life (Continuum, 2004).

And now we have another saucy, alliterative title about more biblical women, some you may have never heard of! In addition to Spencer’s literary prowess and clever wordplays (why didn’t I think of an “ambushed Moses”?), his feminist intuitions are so spot-on we might call him an honorary female! His command of scholarly feminist literature is also remarkable—way beyond mine. In fact, quoting Elisabeth Schüssler Fiorenza in his preface, Spencer considers himself an FBI agent—that is, a “diligent practitioner of Feminist Biblical Interpretation”!

This volume comprises eight chapters, each one with a literary title and explanatory subtitle. The first one, “Toward Bluer Skies: Reducing the Threat Level and Resurrecting Feminist Studies of Women in Luke” continues the FBI theme. How shall good detectives weigh the threat level of Luke’s Gospel toward women? Back in the 1970s, when the second wave of feminism began washing over Christians in the West, Luke was perceived as very favorable to women. The author includes many stories about them and even identifies a group of women disciples who traveled with Jesus (8:1-3).

But by 1992, the first edition of The Women’s Bible Commentary (Westminster/John Knox) carried a scathing essay by Jane Schaberg that began with a red threat level warning: “The Gospel of Luke is an extremely dangerous text, perhaps the most dangerous in the Bible.” Though Schaberg praises Mary’s Magnificat in Luke 1, her overarching opinion is that Luke oppresses women by robbing them of their prophetic speaking role and generally keeping them subordinate and silent. Dark skies indeed!

Spencer then discusses two other feminist writers, Turid Karlsen Seim and Barbara Reid, who acknowledge Schaberg’s points, but insist that Luke rather portrays a mixed message. Though women speak little in this Gospel, stories about them are frequent and prominent. Throughout this volume, Spencer adopts the nuanced attitudes of Seim and Reid rather than Schaberg’s. His wide-ranging research “reduces the threat level” and moves “toward bluer skies.”

Spencer first tackles the parable of the woman who lost one of her ten coins (Luke 15:8-10). Was Luke leaving this woman in her place as a housekeeper—or does Sweeper-Woman God and Mother Hen Jesus identify with her and rejoice at her public party? After eleven pages of reflection and before his “final bit of housecleaning” in that chapter, Spencer writes: “When we toss the hermeneutical coin in the air and watch it flip end over end between suspicion and confession, doubt and faith, we cannot predict on which side it will land. But we can know that the more we toss it, the better chance we have of getting fairer and more balanced outcomes” (p. 51).

Spencer keeps tossing the hermeneutical coin as he takes up five more cases: Mary, the pregnant teenager; Joanna, the independent wife; Martha, the angry hostess; three threatening foreigners (the widow of Zarephath, the Queen of Sheba, and Lot’s wife); and the feisty widow nagging the unjust judge. His approach is eclectic, combining historical and sociological background with literary analysis and using a wide range of feminist sources. Spencer is both exhaustive and exhausting: can one really write 50 pages on the parable of the persistent widow and the unjust judge in Luke 18:1-8? Oh, yes, he can. And much of it, including a better translation from the Greek, was all new material to me.

Because of its length and complexity, it has taken me a long time to finish this book. Sometimes I forget the forest for the trees—or get sidetracked, wandering along the rabbit trails that seem to take us away from the larger point. But chapter headings and sub-headings bring me back to Spencer’s larger program, even as I marvel at his literary skill and juicy wordplays.

Read this book in the same way you view Google Earth—making sure you get the big picture but then zeroing in on details that demand a close reading. Traditional interpretations are constantly challenged or upended. If Lot’s wife was a native of Sodom, and the rest of her relatives were perishing there, was it any wonder she looked back in agony? (Gen 19:26; Lk 17:32). Is the widow nagging the unjust judge being praised because she stayed in her prayer closet—or does it represent women’s prophetic and political capabilities? Does Jesus’s comment to Martha push the sisters farther away from female solidarity or toward it? (Lk 10:38-42).

This book unfortunately lacks a bibliography, but detailed footnotes line the bottom of most pages. It will be most appreciated by readers who have had some experience with feminist biblical interpretation. However, there is so much “salty” meat to chew on that each chapter alone could make a rich feast for a feminist study group.