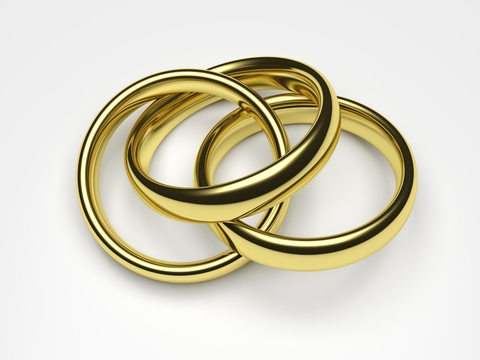 This past fall I was giving a lecture on the civil rights of the gay population, and during the question period a man asked me what I thought about anti-polygamy laws.  I said that I believed a biblical understanding of the role of law in a pluralist society would support legal recognition of same-sex marriage as a matter of civic justice but that there were other things that made polygamy worrisome.  To me, “polygamy” evokes images of young teenage girls in a religious sect being forced to marry older men.

After my talk, the man who had asked the question came up to me and told me about the plural living arrangement that he was in with a few other consenting adults.  Then, in class that week, students who had attended my lecture took me to task for talking about plural family arrangements that I knew little about.  They told me about the show Sister Wives in which several female members of the Apostolic United Brethren Church marry one man.  There is usually just one legal marriage license but there are several spiritual marriages within the union.  I can’t bring myself to watch that show but, according to my students, the family is fairly normal.  All the women are friends, and the children are well cared for and well-adjusted.  The man, my students say, is pretty average.

These conversations made me think differently about things I thought I had an opinion on.  That’s just one of the wonderful things about a job in academia.  But then, judges in both the United States and Canada stepped in with rulings about intimate behavior, and my ruminating had to change to something more; it became legal analysis.

Should governments regulate what we do with our bodies?

In early December, two legal decisions were handed down that relate to regulation of what we do with our bodies.  First, a federal judge in Utah ruled that some state laws regulating living arrangements violate the due process and First Amendment religious freedom clauses of the Constitution.  Second, the Canadian Supreme Court ruled that laws regulating prostitution were unconstitutional.  People on the left hailed both decisions as victories for freedom; people on the right pointed out that as they had predicted, once same-sex marriage became legal, morality would plummet; and these decisions in the two countries were evidence of a slippery slope.  I disagree with both sides because I think both the right and the left are mistaken in seeing these decisions as a zero sum game.  These decisions are part of a critical discussion not about morality but about what role the government should play in regulating behavior.  It is important that we understand what the judges are doing, and it is also important that we think through the implications of the decisions.

In the Utah case, Judge Clark Waddoups, a conservative appointed by George W. Bush, found that there was no fundamental constitutional right to polygamy.  However, he pointed out that, though legislators were allowed to limit plural marriage, they were not allowed to pass laws that targeted a particular religious belief.  In this case, the state law said that bigamy is illegal and “[a] person is guilty of bigamy when, knowing he has a husband or wife or knowing the other person has a husband or wife, the person purports to marry another person or cohabits with another person.” Utah Code Ann. § 76-7-101(1) (2013).  The wording of the statute does not target a religion because the statute is “facially neutral.”  It applies to everyone.  And, in practice, the law against bigamy had been applied to a wide variety of people both religious and non-religious.  However, the part of the law that relates to cohabitation was found to be non-neutral in its application. The state of Utah had an explicit policy of “selective prosecution.” The cohabitation phrase had been used to criminally charge only religious “cohabitors.”  The wide variety of non-religious cohabitors in Utah were never prosecuted.  For this reason, Judge Waddoups found that the cohabiting element of the statute violated the First Amendment religious freedom clauses, the Equal Protection Clause, and the Due Process Clause of the Constitution.

In the Canadian case, the Court had to assess the constitutionality of three laws that limit the behavior of those connected to prostitution.  Prostitution, in Canada, is legal but these laws made engaging in prostitution more difficult. The laws made it illegal to maintain a bawdy house, illegal to live off the profit of prostitution, and illegal to communicate in public for the purpose of prostitution.  The unanimous Supreme Court found all three to be unconstitutional because they violated the Canadian Charter of Human Rights protection of “life, liberty and security of person.”  Even though the purpose of the statutes had been to limit the ability of a pimp to profit from the exploitation of others, the Court found that the statutes were overbroad in that they kept prostitutes from hiring security guards or from managing their trade in their own homes.  The Court said that the laws endangered the lives of people engaged in legal activity and thus failed under the Charter.  However, the Court also suspended its ruling and said that Canada had a year in which to reconsider its law.  Canada has the option of making prostitution safer by regulating it, but it also has the option of making the activity illegal altogether.

These cases raise an important question for Christians who believe that God’s authority impacts all areas of life, including the law.  One thing we have to think about is whether the law— in a country that includes people of all sorts of different backgrounds— ought to regulate intimate behavior.  We might agree that certain intimate behaviors violate biblical norms, but does that mean these behaviors should be illegal?  Christians differ in their perspective.

One group of Christians argues that to the extent possible, we should work to make all sinful behavior also illegal.  These Christians are often adherents to “dominion theology” and have at least some connection to the Reformed belief that all of life is under God’s authority.  The biblical foundation for this argument is usually found in the Old Testament rules that regulated Israel.  The challenge, of course, is that sinful behavior comes in all areas of life, including the economic sphere.  If one argues that sin ought to be illegal, then one has to consider that greed, gossip, failure to worship God, failure to care for the poor and all sorts of other sinful behavior ought to be illegal.  No one goes this far, so adherents to this approach are often accused of “cherry picking” certain behaviors to focus on.

A different approach that some Christians take focuses on the God-given freedom to choose whether one wants to respond toward or away from God.  These Christians agree that all of life, including the government, belongs to God; but they say that God never directed us to use the government as a tool to enforce a particular worldview.  God gives us the choice to respond to God’s word or to reject it, and Jesus never used the government as a sword to compel behavior. A biblical view of government, then, focuses on a debate about what it means to do justice to different people with different worldviews.  When we consider laws that regulate intimate behavior we should focus on this question: is there evidence that harm results from this behavior?  If so, in the interests of justice, the activity should be limited. But it not, people should be allowed to decide for themselves how they want to act. There are all sorts of God-given institutions like families, houses of worship, schools, and so forth that can encourage appropriate behavior. Government, because of its power and control over everyone, must be modest in its claim about what a “good life” is. People must be allowed to determine this for themselves, limited only by the “harm principle.”

It is this second approach that challenges our thinking about plural families and prostitution.  Many Christians have long been clear that bigamy and prostitution should be illegal because they are sinful, but we must be more diligent in thinking through the harm aspect of these activities.  If there is evidence that plural marriage hurts children or that young women are forced into marriage without consent, then it should definitely be regulated.  If there is evidence that prostitution harms young women by increasing sexual trafficking or by engaging girls who have few options after running away from abusive homes, then it must be limited.  But, it’s possible that our reaction to these activities is more visceral than it is really based in evidence about harm.  This is where we have more work to do.

Anne Linstatter
by Anne Linstatter Let it be known that one man on the evangelical side of the fence spent a lifetime working to give women access...