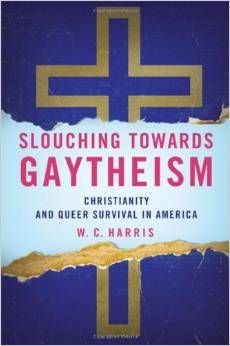 W. C. Harris, Professor of English at Shippensburg University in Pennsylvania, argues in Slouching Toward Gaytheism that because even liberal religion remains fundamentally heteronormative, “the most pragmatic, self-serving response is for queers to abandon religion and spirituality altogether” (p. 88). Certainly Harris is correct that without “kowtowing to religious biases,” there would be “absolutely no grounds for even suggesting, at least without recourse to rational debate, that queers are not citizens entitled to basic rights and protections enjoyed by other citizens” (p. 156). Nor could anyone reasonably deny that for gay people, promoting religious values when the values “disagree” with homosexuality amounts to “promoting violence, harassment, and (self)-extermination” (p. 185).

Undoubtedly it is vital for LGBT people and all other minorities that “Religion can no longer be accepted as an appropriate participant in social debate” (p. 206) – unless that religion is a humanistic and universal appeal to the Golden Rule.  But does all of this justify Harris’ insistence that gay people should “opt for atheism”?

Ironically, in this book that urges me to believe in myself as a queer American, I found myself repeatedly objecting that what Harris claims about gay Christian experience does not accurately represent my experience.  For instance, Harris contends that whether religion is institutionalized or not, it blocks “the discovery of possibilities for erotic and communal belonging beyond its own deep-seated heteronormative priorities” (p. 93).  But it was precisely my reading of mystics from a variety of religious traditions that set me free to believe God’s love for me and LGBT people like me, and to trust the connection I feel with the divinity at the core of my lesbian and transgender self.

In his discussion of “gay-accepting” Christian groups as they point out mistranslations and erroneous interpretations of the Bible, Harris slips into the error of treating facts as if they were mere rationalizations.  For instance, the Hebrew word “qadesh” truly does refer to male temple prostitutes and not to “sodomites” (p. 101). Such enlightened reportage does not merit the scorn with which Harris dismisses it.

Harris also charges that gay Christian groups are careful never to displace any biblical teaching other than the sinfulness of homosexuality (p. 102). But in the many such groups I have worked with, there is concern to publicize biblical support for justice toward marginalized people in every conceivable category: ethnicity, poverty, disability, you name it.

Harris argues that “even though some individuals who now hate gays and lesbians might be brought over to a more humane support, religion will not be part of any such change of heart” (p. 186).  But my own transition from fearful self-hatred to joyful self-affirmation was accomplished chiefly through learning to read the Bible accurately, with the emphasis where Jesus puts it: on loving God and my neighbor as myself (Matthew 22:36-40). And I know hundreds of other queer Christians whose experience is similar to mine.  Apparently Harris has never heard of Christian Humanism!

I must admit that Harris educated me about Purity Parties in which young girls exchange vows and rings with their fathers, promising to remain celibate until their fathers give them to their husbands at the daughter’s wedding.  (Harris claims that in the year 2007 alone there were more than 4000 purity balls in America!)  This practice is most certainly heterocentric, but spookingly incestuous as well.

Harris is very insightful about the contemporary ex-gay Christian movement, where one may feel gay desire but must refrain from acting on it.  By emphasizing “group membership” rather than “privatized unions” (p. 84), this movement supplies a sense of community that can be attractive to lonely people.

Ultimately, my opposition to Harris stems from our differing definitions of religion and spirituality. Central to Harris’ argument is this: “When politicians (or anyone, for that matter) cede ethical ground to religious belief, justice for queer citizens is gravely endangered” (p. 154). And that is true— but not when the politician or other person bases ethical statements on the religious/spiritual ground that we must love our neighbors as ourselves, demonstrating our love for God by the loving way we treat other people.  Unless Harris is willing to forsake the religious but also humanistic Golden Rule, he cannot deny its use as a meaningful basis for ethical persuasion.

Harris closes his book by defining gaytheism as “a project of believing in queerness, in our own subversive nonnormative ethical cores, believing in it more than the ability of religious authority, extramundane beings, or insidious normative valuations to make us whole” (p. 207). Here Harris reveals that he understands religion and spirituality to involve submission to an external authority.  But in fact, I have discovered the Divine within my deepest core, and have found freedom by aligning myself with that eternal core.  I do not believe, as Harris insists, that “believing in gayness [is] the key to [my] centeredness” (p. 207) because although I am gay, I am much more than gay.  I am a thought within the mind of God, who is also alive within me.  And as my gay brother Oscar Wilde once quipped, I know that my job is to “be myself because everyone else is taken.”

So yes, I am Christian and I am gay, and I respect the sacred essence of myself and every other person, Christian or otherwise, gay or otherwise.  People who reject other beings are mistaken about themselves and others and will eventually learn a better way— in this life or another.  Why slouch toward gaytheism when all of creation is sustained by eternal and unconditional Love?