Home Book Reviews Strength for the Journey: A Pilgrimage of Faith in Community 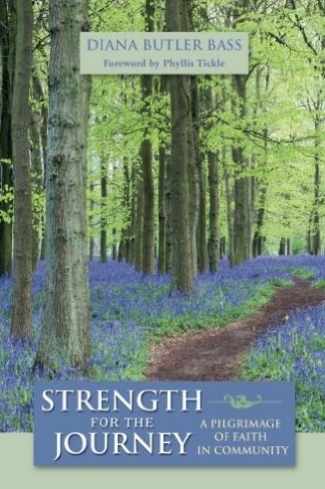 I first became aware of the writings of Diana Butler Bass through the syndicated religion column she used to write and which appeared occasionally in my local newspaper. Once, I thought about writing a letter of appreciation for her column “WWJD: Do You Really Want to Know?” She pointed out that when Charles Sheldon originated the idea of “What would Jesus do?” in his 1896 novel In His Steps, he applied the question to broad social justice and political issues in ways that would be at odds with the ideologies of many who promote the slogan today. I wanted to tell her that many decades ago, as a 15-year-old, I had purchased a copy of In His Steps for 50 cents, and it had revolutionized my life. It changed my career plans and started me on a path that eventually led to my becoming a writer on religion and social issues. But along the way, like Bass, I traversed the paths of evangelicalism, experiencing both the certainties it offers and the questions it raises.

In reading Diana Butler Bass’s Strength for the Journey, I find that she, too, had a profound spiritual experience as a teenager. She writes of sensing “a powerful call to serious Christian discipleship” during an evening service at the Bible Church that high school friends had urged her to attend, although she had been confirmed in the Methodist Church of her parents. It was the beginning of a pilgrimage through — and sometimes an inner struggle with — two expressions of faith: evangelicalism and mainline Protestantism, and finding the Episcopal church to be the spiritual home her heart had longed for.

Her personal faith pilgrimage is one with which many in EEWC can identify. And as the subtitle of her book makes clear, it is a pilgrimage of faith in community. Thus, Bass is telling us two stories. As she describes it, it’s “the story of intertwined journeys — how one woman observed and experienced the shifts and struggles of mainline religion as she lived her own journey in eight Episcopal congregations over two decades. And it is the story of each congregation at a particular moment in its history” (p.18).

History is of great interest to Bass, who earned a Ph.D. in Religious Studies at Duke University. Her dissertation, Standing Against the Whirlwind, Evangelical Episcopalians in 19th Century America was published by Oxford University Press. That research background provided rich resource material for describing her association with Episcopal churches from the West Coast to the East Coast — and the insights she gained from each experience.

Those with evangelical backgrounds will easily relate to her faith journey — including her decision to go to Westmont College as a doctrinally “safe” school for evangelicals, and finding her mind and heart wonderfully stretched. “As an evangelical college, Westmont’s trustees and faculty members surely had answers they hoped we would accept,” Bass says. “Strangely enough, they did not force them upon us. Instead, they gave us room to explore and try to find our own” (p.30).

And explore she did! So much so that when she came back to her alma mater years later as a faculty member, she (along with many of the answers she had found) no longer fit, and neither she nor the college was happy. She left to teach elsewhere.

In between her times as student and then professor at Westmont, she studied at Gordon Conwell Theological Seminary and at Duke, becoming an active member of a number of Episcopal congregations along the way, each with a distinct personality and a story she tells in detail.

During those years, her 10-year marriage to a very conservative husband ended. Later she met and married a true spiritual soul mate and became a mother, at the same time learning to experience God’s motherly love. Her spiritual struggles and changes in outlook are shared honestly, including opening her mind to embrace women’s ordination (which she had resisted while becoming more liberal on other issues) and coming to a new understanding of God’s love for all and what an inclusive church can be. Her friendship with her gay priest led her to thank God for him as she prayed, “Thank you that he has taught me about acceptance, compassion, forbearance, and love. And forgive me for all the stupid things I’ve said and done to my gay friends” (p.212).

EEWC members will resonate with her experience of an ongoing theological quest and maturing faith.

A Friendly Letter to Skeptics and Atheists