Reta says, “To start, I’ll do a series on the Apostle Paul’s letter we call First Corinthians. It may not be the best place to start because it implies that readers already know a lot about the larger biblical context. But it is the source of my most recent writing project, and it contains texts about women that are familiar to Christian feminists. Texts like 1 Corinthians 11:2-16 and 14:34-36 give Paul a bad name—sexist, patriarchal, bossy, and quite unlike Jesus, who accepted and liked women.”

This is an index of posts in that series in order of publication. Recent posts are listed first.

(Posts are in reverse order on this page, with the first of the series at the bottom.) 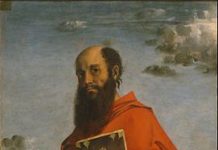 I Corinthians Epilogue—It Ain’t Over Till It’s Over

Reta's Reflections Reta Halteman Finger
Lesson 19 - “'Everything will turn out alright in the end, and if it’s not alright, it isn’t the end.' Such Yogi Berra or Marigold Hotel wisdom applies well to the Apostle Paul’s rocky relationship with his Corinthian churches. 'First' Corinthians wasn’t even the first letter he wrote to them. In 1 Corinthians 5:9-10 Paul refers to an earlier letter which at least some had misunderstood. We can be sure that the letter we have, with its radical vision of sharing honor, wealth, and power equally in the Body of Christ in Corinth, will be resisted by those with the most to lose." 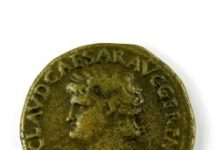 Reta's Reflections Reta Halteman Finger
Lesson 18 - "Actually, this collection is a big deal for Paul. He devotes two whole chapters in 2 Corinthians 8 and 9 and much of Romans 15 to the collection he wants to take “to the saints in Jerusalem.” Paul manipulates his audience as well as any door-to-door salesman or telephone fund-raiser. He encourages his audience to put aside any extra money they make each week so he won’t need to hassle them when he gets there (1 Cor. 16:2). In 2 Corinthians 8:1-7, he tells them how very generous the Philippian and Thessalonian churches in Macedonia have been—they were 'begging us earnestly for the privilege of sharing in this ministry'(!). Then he piles it on by reversing the situation in 9:1-2—how he boasted to the Macedonians, 'saying that the people of Achaia [Corinthians] have been ready since last year!'” 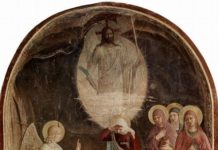 1 Corinthians 15—Puzzles over Jesus’ Resurrection—and Ours (Part B)

Reta's Reflections Reta Halteman Finger
Lesson 17 - In 15:1-11, Paul states his core belief: “that Christ died for our sins,…that he was buried, and that he was raised on the third day in accordance with the scriptures” (3-4). For proof of Jesus’ resurrection, Paul cites six appearances of the risen Jesus—to Peter, to the twelve disciples, to over 500 people, to James (leader of the Jerusalem church), to “all the apostles,” and last of all, to Paul himself (on the road to Damascus several years later) (5-9). Why didn’t Paul mention the women at the tomb? 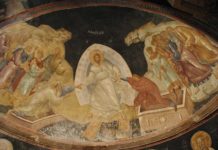 1 Corinthians 15—Puzzles over Jesus’ Resurrection (and Ours)

Reta's Reflections Reta Halteman Finger
Lesson 16 - This is the third time I have started to write this lesson. One reason it’s so hard is because neither Paul, nor I, nor anyone who reads this knows very well what we’re talking about. Obviously, Paul had not yet died at the time he was writing this, nor have any of us yet died; and none of us has yet been raised to life as Paul says Jesus has. What we have are intimations from pre-Christian Jewish writings, visions by some mystics, hints from Jesus before his death, witnesses to Jesus’ resurrection, and Paul’s Spirit-inspired (we hope!) logic. 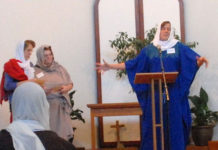 1 Corinthians 14—The Spirit Is in the Details

Reta's Reflections Reta Halteman Finger
Lesson 15 - "In today’s lesson, Paul focuses on two controversial spiritual gifts—prophesying and speaking in tongues. These are the public, vocal charisms that individual speakers are using to glorify themselves rather than building up the whole body in true worship." 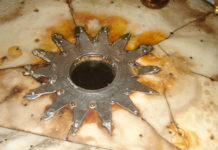 Reta's Reflections Reta Halteman Finger
Lesson 14 - "Ever since the second century, stories embroidering the canonical accounts of Jesus’ birth have become embedded in our celebrations. Every crèche gets so much wrong. Maybe we should worry less about our culture “taking Christ out of Christmas” and more about accurately reading our texts. I’ll warn you ahead of time—there was no stable, no inn, and no innkeeper." 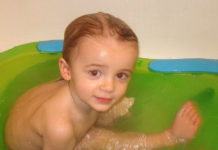 Reta's Reflections Reta Halteman Finger
Lesson 13 - Self-giving love is the greatest quality to endure to eternity (1 Corinthians13:13). Does God have a Google-like “Cloud” where such unselfish acts are stored, no matter how small? Are acts of self-gratification immediately deleted from the Divine Hard Drive? This seems to be the gist of 1 Corinthians 13. 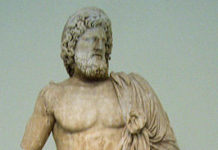 Reta's Reflections Reta Halteman Finger
Lesson 12 - Corinthian Christ-believers hearing this chapter would have understood how radical was Paul’s theology over against the hierarchical socio-religious structure of empire. Elites may have rejected Paul’s view, while lower-class persons would be heartened. How do Christ-believers hear Chapter 12 today? As a commonplace and tame description of the church—or as a radical critique of our culture, our religions, and our American empire? 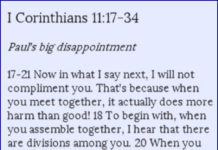 Misunderstanding the “Supper of the Lord”—1 Corinthians 11:17-34

Reta's Reflections Reta Halteman Finger
Lesson 11 - Most “tables of the Lord” today focus primarily on one’s vertical relationship with Jesus. Even our church potlucks—where actual meal-sharing takes place—usually comprise people of similar social status. Today in this post-campaign season, bipartisanship still remains an elusive dream. Huge socio-economic chasms lie between the 1% and the bottom half of the 99%. Perhaps Christians on the political left or right, the well-off or the struggling, should observe Jesus’ practice by eating together. What do you think might happen? 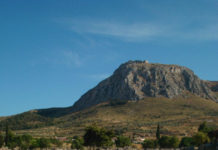 Reta's Reflections Reta Halteman Finger
Lesson 10 - "One may wonder about the 'chain of command' in 11:3: God, Christ, man, woman. Is this the same person who opts out of the hierarchical 'patronage pyramids' that structure life in the Roman Empire in chapter 9? (see Lessons 3 and 9). This linkage and the mixed messages of this passage indicate to me that Paul is still a work in progress." 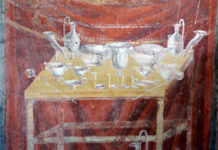 Reta's Reflections Reta Halteman Finger
Lesson 9 - ". . .Paul has a big problem with such hierarchical values and practices. His vision of God’s reign on earth is egalitarian with special concern for the poor and hungry. He knows how entrenched such idolatrous thinking becomes the higher one ascends on the socioeconomic ladder. So he uses the example of his own life to show his house churches the cost of switching allegiances from Caesar to Jesus." 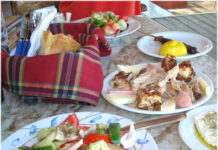 Carnivores and Vegetarians—Can We Get Along? (1 Corinthians 8)

Reta's Reflections Reta Halteman Finger
Lesson 8 - "The issue of conscience is not new, at least not in my experience. Were you ever part of a youth group wrestling with what to do about differing convictions regarding use of alcohol, watching certain movies, or any number of “worldly” practices that some think are okay and others reject? We may also remember reverse ego-traps in such conversations, when the “weak” would try to manipulate the “strong” into feeling guilty. This happens politically today when, on the basis of their own religious conscience, some conservative Christians want to deny access to free birth control in health insurance plans for their employees." 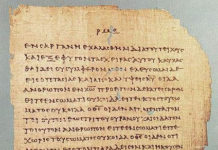 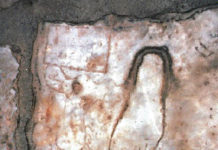 Reta's Reflections Reta Halteman Finger
Lesson 6 - "The report Chloe’s people (1:11) brought to Paul in Ephesus contained shocking news— scandalous enough, perhaps, for a headline in the ancient Roman equivalent of Rupert Murdoch’s News of the World. No wonder they’re quarreling!" Paul holds off until he has laid out the theological foundation of his gospel (Lesson 4) and explained how he and Apollos worked together for church unity (Lesson 5). Then he lets loose. “It has been reported to me that there is sexual immorality among you of a kind not found even among pagans!” (5:1). Given what we know about Roman debauchery, this must be over the top! 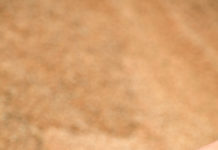 Reta's Reflections Reta Halteman Finger
Lesson 5 - Thus, beginning in 1 Cor. 3:5, Paul attacks a problem many Christians will recognize—competition between church leaders and their factions. Apparently, Apollos is Paul’s only significant rival for leadership among the Corinthian churches. His superior eloquence has quite possibly attracted more believers of higher status. Patrons with more wealth and influence are changing the character of the house churches. But Paul never denounces or shames Apollos. 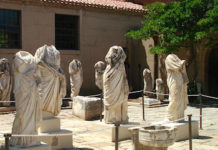 Reta's Reflections Reta Halteman Finger
Lesson 4 - In the last blog we set the stage for hearing Paul’s response to the quarreling factions in the house-churches he helped to plant. Paul is deeply troubled by this. “Has Christ been divided? 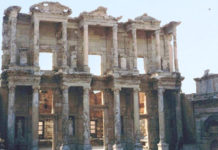 After the Apostle Paul Left Corinth

Reta's Reflections Reta Halteman Finger
Lesson 3 - During his two or three years in Corinth, Apollos has been a smash hit in the Corinthian Jesus-assemblies. We can guess that the “not many” who are “wise by human standards…powerful…and of noble birth” (1 Cor. 1:26) comprised those believers who were attracted to Apollos’ preaching more than were the laborers and slaves who made up the majority within the Corinthian assemblies. 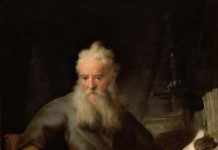 Getting around the Roman Empire

Reta's Reflections Reta Halteman Finger
Lesson 2 - Paul of Tarsus dominates so much of the New Testament not only because he was a brilliant and passionate church-planter, but because he wrote letters to those assemblies after he moved on—letters deemed important enough to be copied and shared with believers in other cities like Philippi, Rome, or Corinth. “If you give us a copy of your letter, we’ll give you a copy of ours.” Maybe you don’t like Paul, but you have to hand it to him—the guy had vision! 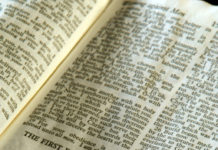 Introduction to the Bible Study Series

Reta's Reflections Reta Halteman Finger
Lesson 1 - For Christian feminists who read this website, no matter how little we know about the Bible, or how much we’ve been hurt by oppressive interpretations of it, or how quaint it seems compared to our world today, we still have some “Bible DNA” in our roots. At some level, we are “People of the Book,” an appellation applied to Christians, Jews, and Muslims, each with scripture they privilege above all others.