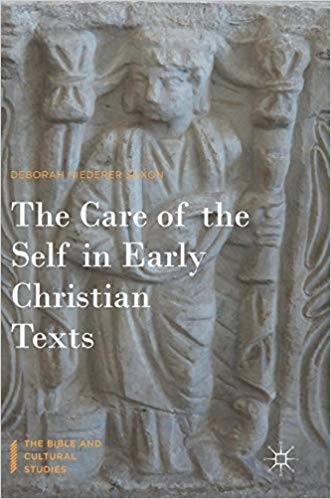 If you are weary of modern scholars who describe women in the early Christ movement as self-sacrificing or passive followers of men, Deborah Niederer Saxon’s innovative new book, The Care of the Self in Early Christian Texts, will refresh you. Saxon investigates how authors of early Christian texts such as the Gospel of Mary and the Passion of Perpetua and Felicity portrayed their female protagonists with stalwart leadership. Employing the ancient notion of the “care of the self,” or self-control of the emotions, which in Greco-Roman society was a masculine ideal, Saxon demonstrates that these authors portrayed Mary, Perpetua, and Felicity excelling at this gendered ideal. In that time and place, these portrayals of female Christ followers were astonishing.

Saxon’s deep analysis of the Gospel of Mary is especially stunning in illustrating how its author portrayed Mary as more successful than men at the Greco-Roman ideal of self-control. Mary was portrayed as a teacher of the men, careful in her speech; when she wept, it was for Peter, because he did not believe what the Lord had said. By contrast, the author described the male disciples as distressed and weeping, with Peter and Andrew, in particular, as wrathful and hot-headed—the very opposite of the Greco-Roman ideal of a man with self-control. Again, this was an astonishing reversal of the ideal gender roles of that time and place.

This book also goes a long way toward dissolving the false dichotomy of orthodoxy and heresy, or orthodoxy and Gnosticism, among Christ followers. This is especially the case with respect to Saxon’s discussion of martyrdom, including how writers like Clement, Ignatius, and Polycarp represented self-care. Saxon does a deep analysis of the Passion of Perpetua and Felicity to provide a remarkable case in point. Perpetua and Felicity are believed to have been actual historical women who lost their lives in the coliseum of Carthage, and who quite possibly were members of the New Prophecy movement, also known as Montanism. Saxon illustrates how some writers claimed that “heretics”—which they called some other communities of Jesus followers, such as the New Prophecy movement—embraced death as a form of self-sacrifice while claiming that their community did not. Yet the narrator of Perpetua and Felicity’s story described these women as neither passive victims nor as self-sacrificing, but as embracing their care of the self and excelling at it.

By focusing on practices instead of on what we assume were their beliefs, Saxon’s research reveals a rich variety of early Christ movements. In particular, her research on the approaches to martyrdom in different communities dispels the false dichotomy of “orthodox” versus “heretics” or “Gnostics.” She brings to light a spectrum of views represented in both Nag Hammadi and other early Christian texts, and her analysis has implications for feminist scholarship.

This scholarly book is exceptionally well-written and easy to read. Saxon has included headings for each chapter, section, and subsection, which helps make her arguments easy to follow. The many footnotes demonstrate Saxon’s deep knowledge of the subject matter and are a source of additional information for the interested reader. Overall, this is a worthwhile study. It plunges the reader deep into the lived world of Jesus’ followers during the first three Christian centuries.

If you are weary of modern scholars who describe women in the early Christ movement as self-sacrificing or passive followers of men, ... The Care of the Self in Early Christian Texts will refresh you. Click To Tweet