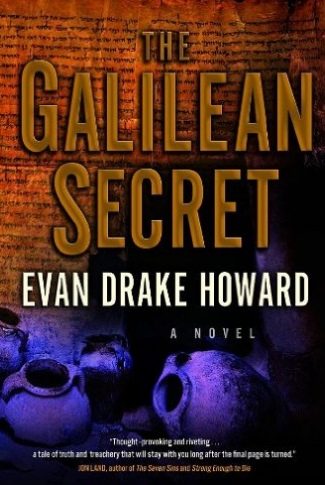 Whoever heard of a novel with enthusiastic jacket endorsements by theologians like Harvey Cox and Richard Rohr, not to mention praise from New Age leaders like Deepak Chopra? Well, Evan Drake Howard, who holds a Master of Divinity from evangelical Gordon-Conwell and a doctorate from Boston University, has written that novel.

Howard pastors a community church in Providence, Rhode Island. His depiction of the relationship between Jesus and Mary Magdalene has been called “fascinating and unique” by Publisher’s Weekly—and it is. Rejecting the Da Vinci Code idea that Jesus and Mary were married and parents, but also rejecting the widespread assumption that Jesus was much too holy to feel sexual desire, Howard pictures the couple as disciplining their yearnings in order to teach that every healthy individual must realize the holiness of internalized feminine and masculine gender roles. At no time does the plot belittle human sexual desire, which both Jesus and Mary feel. Instead, the story implies that certain circumstances and the pressures of ministry can sometimes demand an unusual response such as platonic love.

The Galilean Secret features a double plot-line spanning two millennia. Track one takes place in first-century Jerusalem while track two focuses on the contemporary Israeli-Palestinian conflict. The first tells the familiar story of Jesus, Mary Magdalene, Judas, Nicodemus, and Barabas the Zealot. But there are some unique twists, such as interaction between the biblical characters and the fictional Judith and Gabriel and their entanglement with the Zealots who were plotting the overthrow of Rome. Dismas is a mostly fictional character who links the fiction to the Gospel accounts by becoming the “good thief” who is crucified next to Jesus. There is also the novel concept that Judas betrayed Jesus because he was insanely jealous that Mary had rejected him in favor of Jesus. And the plot also makes clear that Judas worked hand-in-glove with the Romans to get Jesus executed, so that the Jewish role was peripheral, a result of Judas’ trickery.

The modern plot focuses on the story of Rachel Sharett, an Israeli peace activist, and Karim Musalaha, a young Palestinian who happens to find an important scroll in a cave near Qumran. They encounter great dangers as they seek to bring the scroll’s message of peace and reconciliation to their respective communities. Clearly the plot supports the concept of two independent states sharing Jerusalem and living in harmony with one another. There is no mention of a different solution–a single secular state that could keep Jerusalem welcoming for Christians as well as Jews and Muslims and followers of other religions and no religion. But one cannot expect a novelist to cover every political possibility.

Pastor Howard misses no opportunity to emphasize the importance of women’s leadership and to embrace “the feminine dimensions of the divine.” As he comments in some final “Author’s Notes,” the struggle of Jesus and Mary is “an extraordinary quest to establish intimacy with the gender opposite in themselves. This spiritual approach reminds us that only the divine lover of our souls can bring ultimate fulfillment.”  Howard asserts that because Judaism, Christianity, and Islam are “dominated by male images of God and by men in positions of leadership,” it would be “a huge step forward” for humanity to “evolve beyond this one-sided paradigm.” The point is that by reconciling the opposites within ourselves, including our language and our concepts, we move closer to reconciling regional and international conflicts in the world around us. Never mind that our “masculine” and “feminine” components may not be as “opposite” as society thinks; the point about inner wholeness is a vital one.

As theology or ethics, The Galilean Secret scores an A for its emphasis on internal reconciliation leading to external reconciliation. But as fiction, the plotting sometimes strains the reader’s credulity with some rather unlikely coincidences. Unfortunately for novelists, truth really is stranger than fiction. Unlike real life, where serendipitous events may prove astonishing, fictional events must be plausible, not merely possible. Nevertheless, the characters are vivid enough and the pace is quick enough to provide a compelling experience.

The War on Christmas: Or, Why Some Christians Really Bother Me...