Home 2018 Conference Recap and Reflections The Power of the Moment

A 2018 Gathering Reflection by McKenzie Brown

The first time I went to a Christian Feminism Today Gathering was in 2014, and I’ve looked forward to every Gathering since. Each time I attend I seem to find myself in a markedly different place than before. The first time I attended, I wanted to be ordained in the United Methodist Church and rid it of patriarchal God language (or at the very least, in the Central Texas Conference). At my second Gathering I was a recent graduate, no longer in the ordination process and weighing whether or not to pursue law school or graduate study in philosophy.

I attended this most recent conference with a lot on my mind, as the year leading up to it was probably the most tumultuous and formative of my young adulthood. I had moved one thousand miles away, started a career I soon discovered I did not want to pursue, and passed up a number of graduate school offers.

Given the aforementioned tumult I wasn’t sure where I would fit in at the 2018 conference. I was no longer an aspirational academic and no longer in any kind of ordination process. I’ve never identified as evangelical, and my career trajectory at the moment was secular and largely administrative—pretty dry material to bring to a room full of reverends, doctors, and other revered individuals engaged in crucial works of justice. Though I brought anxiety with me, it was allayed by the opportunity to serve as emcee and to appreciate the fascinating programming, which largely utilized the power of personal narrative.

In her text Wandering in Darkness: Narrative and the Problem of Suffering, Eleonore Stump asserts that narrative is crucial to fully understanding the solution to the Problem of Evil (i.e., that a benevolent God would allow suffering). While analytic philosophers have traditionally attempted to solve this problem using propositional knowledge, such an approach tends to be abstracted from reality and not particularly useful without supplementing it with personal narrative. As such, a realistic solution to the problem would be one that synthesizes propositional (or analytic) knowledge and the distinct power of narrative.

The Problem of Evil can easily be categorized as a “wicked problem.” That is, a problem made particularly difficult due to the varying perspectives of the stakeholders invested in its solution, among other characteristics. At the Gathering this year, everyone in their own way was grappling with the wicked problems posed by our divisive sociocultural climate. Indeed, over the course of the weekend, attendees were privileged to experience deep dives into such topics as the impact of trauma on the body, mind, and spirit; difficulties that need to be addressed in our broken immigration policies and how to fix them; locating our specific social context in order to further our collective liberation; and many other subjects needing serious attention “in such a time as this.” In each presentation there was an aspect of personal narrative, which enabled listeners to empathize with the content and search for solutions grounded in the principle of maintaining and/or restoring the dignity of others.

I found the highlight of the Gathering to be a presentation explicitly focused on the power of narrative—facilitated by Jen Newman, Paula Trimble-Familetti, and John Saxon. In it, a number of Christian Feminism Today members offered stories of times when they stood up to injustice, and each connected it to their personal identity and wider narrative arc. After each individual told their story, John would offer a piano reading of their energy. The entire audience was lost in the power of the moment, for their stories and energy made the room sacred. I’ve thought about the energy in the space that was created a number of times since then, and it has a calming effect on my heart that’s difficult to describe.

Over the course of the conference I tried to keep busy. I moved chairs, ran small errands when needed, and made sure I was always ready for announcements with a cat pun or two. I attempted to keep my thoughts on external things, because internally I felt that I no longer had anything substantive to contribute. I was roughly two years removed from scholarship and academia, even further removed from the Methodist Church, and at least a year removed from my days of community organizing. My story was one of keeping my head above water.

The last day of the Gathering we came together for worship. Many reveled in the power of the presentation led by Jen, Paula, and John the night before. It seemed as if everyone felt a sense of residual energy—I know I did. Which is why when one of our members, Peg Conway, said she would have liked to hear my story, I was surprised. Surely she didn’t know that I didn’t have anything to say. At least, nothing nearly as powerful as what we had heard the night before. Her comment stuck with me, and I’ve started to think that my story has value.

I left the Gathering with a fuller understanding of what speaking truth to power looks like. I came to understand that truth is multifaceted and entails a synthesis of propositional and narrative knowledge. The latter needs intentional cultivation, as it has been stigmatized and devalued due to its association with femininity, whereas propositional knowledge has been valued due to its association with masculinity. I also came to understand that the gendered binary I had associated with propositional and narrative knowledge had caused me to devalue the spaces that are most transformational: the liminal spaces and seasons of life, the lacunae. These are the exact spaces that Christian Feminism Today searches for wisdom, and the results of its search keep me coming back every two years. For it’s in this community that I feel most human and become best equipped to acknowledge and elevate the humanity in others. 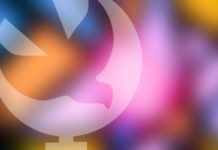 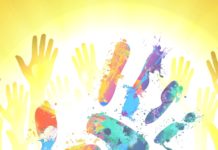 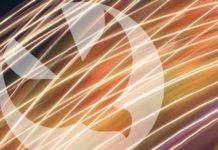 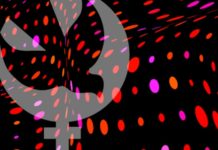 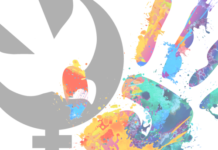 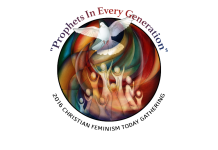 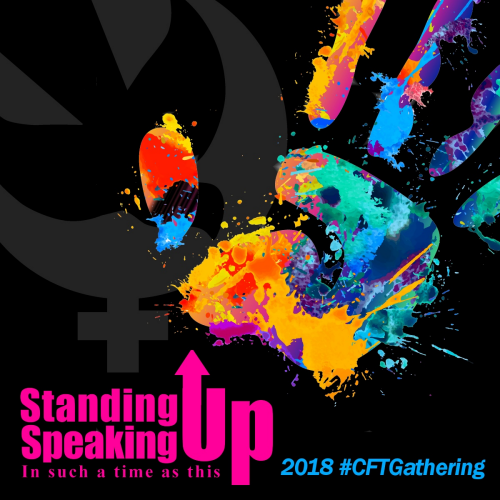 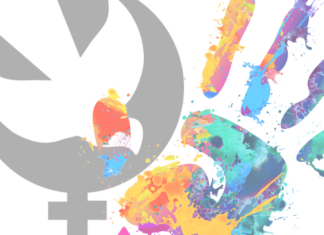 Rev. Dr. Christy Gunter
On July 26, 2018, we were so excited because we finally got to start our conference in St. Louis. Feminists were flying high (you know, literally, in planes). We told people, “if you aren’t able to come in person this year, have no fear. Granted you’ll miss out on big egalitarian hugs, BUT we have a social media team ready to make you feel like you’re with us in spirit!” 2002 EEWC Conference: A View from Backstage and Beyond