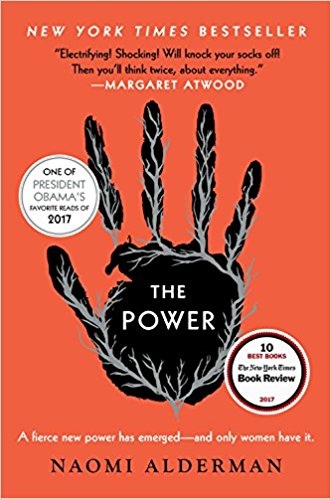 We live in a patriarchal world that structures power around men, but what would happen if women became physically stronger than men?

In her newest science fiction novel, The Power, Naomi Alderman takes the reader through a global cataclysm that disrupts normative relationships between men and women. Women develop a skein: a muscular strip across the collarbone that emits electrical power. With skein activation, women can give shocks and are able to physically overpower men. The current can be used to defend or attack, to heal or to give “that thing” for fun. Skein currents can even force men into involuntary stimulation. The novel’s global drama depicts how women in various parts of the world handle their new power. For instance, Saudi women start by setting all cars on fire since they weren’t allow to drive them.

The cast of characters in The Power is diverse and colorful. My favorite was Roxy Monke, the daughter of an English mobster, probably because she was most like me: ready for a fight. She also became one of the most vulnerable characters, which usually draws in a reader.

My second favorite character was Tunde Edo, a rich boy from Lagos who was preying on a girl before he got shocked. Tunde sees the potential of a global cataclysm before anyone else and travels the world to document it on his YouTube Channel. He sometimes broadcasts in a Speedo and is sexy enough to make even the most powerful women a little nervous.

I listened to the audio recording of the novel and was pleased how the narrator nailed Tunde’s West African accent, as well as the southern accent of the African American girl who rises to power as a demigoddess of the new church.

Most of the story takes place in a world analogous to 2018, with the disruption of familiar political structures, and ends 5,000 years in the future with a historian doubting that women were ever without skeins. The historian also doubted that men once held power over women despite archeological ruins of defaced or damaged male statues. At that point in the future, men are so passive and weak it seems highly unlikely that they had made any significant military contribution. In fact, the idea of men in military garb seems more like a sex fetish for women. And a male-gendered God is even more laughable and blasphemous.

Listening to The Power helped me feel powerful. One night I held my husband and imagined electrical power coming from my fingertips to energize him in a pleasurable way. My skein wasn’t working that day, but I felt different, as if my touch meant more.

I’m still trying to get my skein to activate. According to the story, women have always had one but did not know how to activate it, and young women can activate the skeins of older women. Archeological evidence from the Museum of Artifacts backs this theory. Perhaps I’ll see if my 12-year-old daughter will activate my skein for me so we can spar and play together!

Whether through my job or my social status, or by picking up a barbell, I’m a woman who exercises power each day. It’s been clear to me since college that I enjoy many freedoms and privileges that most women around the world don’t have access to. The Power not only made me feel powerful, it also it brought me into a story that let me feel a social privilege that sexism normally denies me. Words can’t explain how good that felt.

I think I will listen to The Power again when I need a jolt of that power; not soon, however, because my teenaged son nabbed my copy. I suspect my daughter will take it after him. But after listening, at least she will understand how to activate my skein!