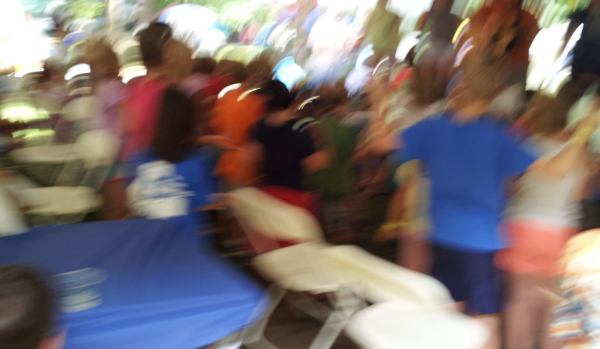 There’s something missing at the Wild Goose Festival.  I paid close attention for three days.  At first I didn’t want to say anything.  Then I wanted to say something but wasn’t sure if it was the right thing to do.  Then, when I decided I should say something, I wanted to double check to make sure I was right.  Now I’m ready to say it.

In a word, nothing.

You know, nothing.  It takes form in silence. Space. Stillness.

Ask the world’s most accomplished musicians to name the most important sound in a musical composition, and they will say one thing.  Silence.  The silence between the notes is what gives the sound meaning.  The intake of breath between the stanzas of a lyric can tell you more about the emotional content of a song than the notes themselves could ever do.  If you are writing a piece of music, you’ll seldom instruct every instrument to play all the time.  You put in rests and pauses, you hold notes allowing their sound to dissolve into silence.  The silences observed by some of the instruments are what allows the melody to become manifest in the mind of the listener.  You can write music without silence, but it won’t be transcendent.

Ask a graphic designer or a visual artist about negative space.  The seemingly empty places on the page, the places where there is nothing to see, are the places that allow the eye to rest.  They’re the places that tell the brain what is important to focus on.   You can take a photograph or paint a picture that has something going on in every square inch, but it won’t leave an observer breathless.

And in our spiritual seeking, stillness of the mind is so often what is being sought.  Mystics speak of trying to reach a state of quiet receptivity so that they might more fully experience the Divine.  Many will tell you  that God’s presence is often more evident against a backdrop of stillness.

Action must have rest, or it is chaos.  The silences, the negative space, the stillness are passive, and in our culture’s obsessive focus on accomplishment, motion, growth, progress,— all embodiments of the active principle— the value and importance of balancing this with embodiments of the passive principle are often overlooked.

I think the architects of the Wild Goose Festival, like so many of us, overlooked the importance of including silence, space, and stillness in their planning.   It’s easy to do.  But their creation is diminished by this oversight.  When sound is not balanced by silence, the sound is less meaningful.

Perhaps in the future organizers can experiment with space, silence, and stillness.

Allowing more temporal space would enable people to get from one venue to another without rushing, and make it possible for people to linger after a workshop or presentation to talk with each other.   Having set meal times with no scheduled activities would allow people to more easily make plans to share meals together.

Physical spaces for quiet discussion— spaces that are not relegated to a remote and inconvenient area on the grounds— would encourage the creation of connections and relationships by giving people somewhere to go to talk quietly, sit in silence, meditate, or pray together.

Asking speakers to allow more time in their presentations to interact with audience members (both during their time on the stage and afterwards) would be helpful, too.  That way audience members are not being acted upon all the time, but are being encouraged to initiate action on their own.

Realizing that scheduling nothing is just as important as scheduling something, might help the people involved in a weekend of spiritual discovery to become aware of how Spirit is moving through them, or to engage in relationship building, or participate in spontaneous spiritual practice together.

I don’t want to complain about someone else’s intricate and complex creation.  So this is not a complaint.  The creation called Wild Goose is full and rich, and the staff and volunteers are pulling it off like pros, even in the face of irritatingly bad weather.  Instead, I want to offer my observation in a spirit of helpfulness.  It’s an observation, not a criticism.

I guess what I’m saying is that the “Wild Goose” is (most likely, unintentionally) unbalanced.  It is active— always presenting this and that, always making noise, always talking, always challenging, intent on filling up every moment.  Were it to be more balanced, attendees might be better able to detect the presence of Spirit in themselves, and in their midst.  She often whispers, seldom shouts, but sometimes She can’t be heard over the din.