Home Book Reviews The Trans Evangelist: The Life and Times of a Transgender Pentecostal Preacher 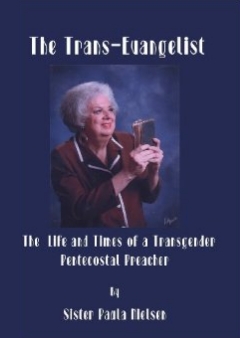 In my opinion, every Christian feminist should read at least one autobiography of a transsexual Christian in order to share their pain and then the glory of becoming the gender God created the author to be.  One such really superb autobiography is the Rev. David Weekley’s In from the Wilderness: She-r-man.  Weekley had the courage to transition from female to male while he was in college, and then to serve as a beloved United Methodist minister for almost thirty years before making public his transsexual identity.  Since then, the abuse heaped upon David and his wife Deborah by United Methodist leaders has been disgraceful.  The Weekleys deserve all the support Christians can afford.

But the life described by Sister Paula Nielsen is very different from David’s.  Not just because Sister Paula is male to female while David is the opposite, but because Paula has been featured as “Red Hot Mama” at Portland’s famous drag show Darcelle XV, has engaged in plenty of gay sex, including prostitution, and yet has always loved Jesus.  In her mature years she has devoted her life to preaching the Foursquare Gospel on television.

It is painful to read about Paula’s unfulfilled yearning to be a pastor’s wife, but even more painful to read about the cruel rejection she suffered from her father and from various church leaders who should have known better.  I strongly recommend Paula’s book to anyone who can bear to read an unvarnished account of how life has felt to a transsexual Christian living openly for many years before Lesbians, Gays, Bisexuals, and Transgender people began to agitate for justice.  During all those years Paula had to survive on the paltry crumbs that fell under the tables of the church, the LGBT community, and society in general.  She not only survived, but she kept her sense of humor because of her never-failing friend Jesus.

My heart echoes what the American Baptist pastor and theologian David L. Wheeler has written on the cover of The Trans Evangelist.  He says that Paula’s “unique experience confounds and transcends categories broadly accepted by both liberal and conservative Christians, and religious leaders and secular persons alike… She proclaims that we are all sinners being saved by grace, and that each of us may come to [God] ‘Just As I Am’. Let’s listen to her.”

The Secret Thoughts of an Unlikely Convert: An English Professor’s Journey...