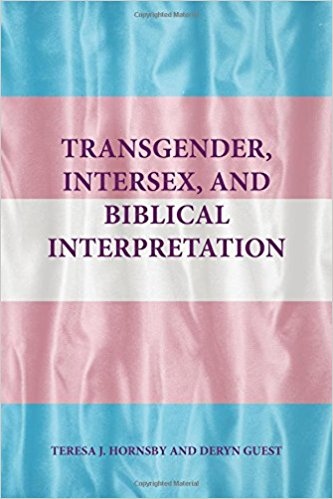 In this brief but excellent book, two Bible scholars describe and prove their thesis that the Bible has always been read through “a gender-binary lens with a heteronormative bias” (p. 11).  They do so by taking responsibility for their biblical interpretation—meaning that they question “texts that make some lives ‘unspeakable’.”  Those lives would not routinely be permitted to speak for themselves in theological discussions, and they are unspeakable because they are often repudiated and rejected (p. 22).

The first illustration of interpreting the Bible responsibly is “reading Genesis backwards,” a journey that takes us away from the binary pairing of man and woman to the undifferentiated “earthling” of Gen. 1:26, and then further back to the pairing of creation and chaos.  Genesis 1:1-3 describes “the formless fluidity” that exists “before God speaks.”  But the Hebrew term translated “deep,” “abyss,” or “waters” is a queer noun: masculine form, usually appearing as a female noun, occasionally given a masculine suffix.  In other words, “a gender-shifting word” (p. 25).

Most biblical interpreters are content simply to emphasize the dreadfulness and darkness of this formless space.  But the darkness and the chaos are shown in Genesis to be responsive to the command of God, terrifying only if God should withhold all boundaries and containment (as in Noah’s flood) but the source of all material creation when coupled with God’s wishes (as in Gen. 1:2-3).  In reality, therefore, “the Divine is to be found within the deep, dark, fluid presences that are not all about order and boundaries” (p. 40).

Like the dark chaos, transgender bodies stir up boundary anxiety in many people.  Consciously or unconsciously, people who fear uncertainty are alerted by transpeople to the awareness that “the binary cannot hold; the monstrous is already always within the ordered.  It lurks.  It coexists” (p. 31).  To some degree, God’s creation also seems fluid, opaque, and unruly; it “deconstructs the center” (p. 31).  And that instability explains the intensity of the violence against transpeople: many human beings detest ambiguity.

I have oversimplified the beautiful logic by which the argument was built, and I have done so in the hope of whetting your appetite to read the book for yourself.  “Gender and sex are an illusion. . . . Clearly, materially, biblically, nothing is either-or” (p. 19).  Do you have the courage to read the evidence by which Hornsby and Guest make their case come to seem self-evident?

And are you brave enough to confront the Jehu of II Kings, noting that his masculinity is not in any way female-identified, but connected solely to killing and violent male agency (pp. 58-60)?  And then to confront Jezebel’s “female masculinity,” in which she uses defiant language that matches Jehu’s for tone and irony (p. 70)?  Yes, Jezebel does paint her eyes and style her hair—but she does so as she boldly approaches her window for the violent death she knows she is facing.  And when her body is consumed by dogs, we learn we are witnessing the overthrow of the warrior goddess Anat, who is as bloody as Jehu (p. 74).

Comparing Jehu and Jezebel, we get a sense of ancient gender norms.  Projected against the female-scorning masculinity of Jehu and the feminized masculinity of Jezebel, neat schemes of male-female complementarity shrink away into the shadows where they belong.  When I was young, I was told repeatedly that any woman who attempted to interpret Scripture in public would be a Jezebel.  Get the picture?

Furthermore, can you confront the implications of King David’s dance as described in I Chronicles 15:29?  David’s wife Michal called his dance shameless (II Samuel 6:22), but David insists that he was playing “before the Lord.”  He danced for a “masculine Yahweh and a textually feminine people of Israel” — “from man to woman, and back to man” (p. 89).  Later, Jesus speaks of dancing with the child-like people of Israel in the marketplace (p. 90; Luke 7:31-32).  “Like David, Jesus danced in the lacuna between heaven and earth to make the two as one” (p. 93).  Again, I have left out details in the hope of luring you into the book.

If you can face learning “a new apocalyptic response, one that embraces ambiguity, a trans hermeneutic if you will, “then you will also know that the real threat our culture faces is “a neoliberal capitalism born of greed.”  By contrast, a trans hermeneutic “imparts a means of survival: to embrace the ambiguous and purge the illusion of a gender binary.  No more binary, nor more monsters” (p. 103).

That sounds hopeful to me.  How about you?

weconnect – There Will be Some Tears