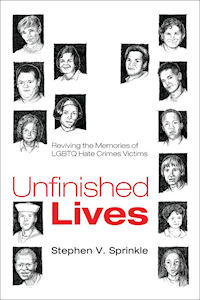 Through this book Rev. Dr. Stephen Sprinkle, a professor at Brite Divinity School, Fort Worth, Texas, sounds a powerful, prophetic call to justice and healing. He tells the stories of fourteen representative lesbian, gay, bisexual, transgendered, or queer/questioning (LGBTQ) persons who suffered brutal murders at the hands of people taught to hate by religious and social institutions.

It would be hard to read this book without being moved to help churches and our whole culture change messages of condemnation and denigration to messages of complete acceptance and affirmation of all LGBTQ persons.

The Power of Stories

Dr. Sprinkle believes in the power of stories to bring change, and he is a master storyteller. These fourteen young people come alive again in these stories as we read about their gifts, passions, loving relationships, and generous spirits. Sprinkle’s smart, vivid descriptions of each person’s cultural milieu also add dimension to these portraits. Evident in these compelling stories is Sprinkle’s extensive research, including personal interviews and visits to locations where these young people lived, loved, and died. He doesn’t portray them as martyrs, but as everyday people who could be anybody’s child, friend, neighbor, classmate, or co-worker.

From All Walks of Life

Sprinkle states that he has tried to represent “national, sexual, racial/ethnic, identity, and gender diversity” in these stories, but regrets that there are fewer stories of women than of men and that there isn’t a story of a bisexual person in the book. “Lesbian hate murders,” he writes, “are harder to find on record than the stories of gay men. This does not mean that lesbians are not being murdered in large numbers throughout America. I believe they are, but the deaths of many lesbians, I suspect, are hidden in the vast numbers of women who are outrageously raped and killed every day.”

Throughout the book he connects the evil forces of misogyny, homophobia, heterosexism, transphobia, racism, classism, and xenophobia that lead to hate crimes. In the story of one of the women, Talana Quay Kreeger, he describes “homophobic rage and an oceanic misogyny” erupting in Ronald Thomas as he savagely murdered her.

The Role of Religion

A thread that runs through these stories is religion as the cause of and/or the solution to the hate crimes. Complicit in these crimes are not only churches preaching anti-LGBTQ theology but also those remaining silent in the face of this hate-inducing rhetoric. “No other form of contemporary bias against a social group is as theologically based as anti-LGBTQ discrimination,” Sprinkle writes. “People who kill LGBTQ folk almost universally seek to justify their murders by appealing to God’s judgment and quoting scripture verses.”

For example, Kenneth L. Cummings Jr., a gay airline attendant from Houston, Texas, was murdered by Terry Mangum, who called himself “Elijah” and “Melchizedek” and used other scripture passages to justify his heinous act. Satendar Singh, a gay Fijian immigrant living in Sacramento, California, was killed by Russian immigrants motivated by the anti-LGBTQ teaching of their fundamentalist church.

On the other hand, Sprinkle shows that LGBTQ people of faith and their allies can fight this “deadly ideology masquerading as biblical truth” with the “refining fire of truth and love.” When gender non-conforming Charlie Howard was thrown over a bridge in Bangor, Maine, and left to drown, Jewish and Unitarian leaders and Presbyterian minister William Sloane Coffin spoke out against the hatred that led to this sinful, cruel act. When one church canceled the funeral of Talana Quay Kreeger because of the prejudicial attitudes of the community, an Episcopal priest opened his church for her memorial service. The murder of this lesbian carpenter also led the LGBTQ community to found St. Jude’s Metropolitan Community Church in Wilmington, North Carolina, that teaches love and celebration of all people.

The Author’s Own Experience

It took personal courage as well as storytelling gifts to write this book. Although Sprinkle does not relate his full story in the book, he gives a brief sketch of his personal experiences of homophobia and anti-gay violence. During the seventeen years he served churches as an ordained minister, he came out only to a few trusted friends. Nevertheless, his home was defaced by anti-gay graffiti; his car was vandalized; his phone and television service were ripped off the back of his house; church leaders received anonymous letters about him; and his two pet dogs were butchered and hung in a tree in his parsonage backyard, an act of terror that still gives him nightmares.

When Rev. Sprinkle moved to Texas to begin his career at Brite Divinity School, he came out of the closet fully. He says that these past sixteen years have been the most fulfilling of his life, but that he has also paid a price for his openness and his advocacy work. After speaking to the Fort Worth City Council and a large group of people gathered to debate protection statues for LGBTQ people, he received a voice message hurling hateful epithets and threatening his life.

Sprinkle laments the continuing rise in the number and the brutality of violent crimes against LGBTQ people; young people in America’s schools and neighborhoods are especially being targeted at an alarming rate, as much for their non-traditional presentation of gender as for their sexual orientation. In this book he honors the lives not only of well-known hate crime victims, like Matthew Shepard, but also of little-known ones.

Lamentation as an Act of Justice

Sprinkle believes in the power of lamentation and remembrance as “political acts of love and justice, as well as acts of communal therapy.” Referring to feminist scholar Phyllis Trible’s Texts of Terror, in which she invites readers to lament the violence experienced by four representative women from the Hebrew Bible, he writes: “Behind each of these tales of victimized biblical women stand stories of countless women in our own time brutalized by misogyny and gender-hatred in an irrational attempt to buttress the wobbly walls of male domination.” Also citing womanist scholar Emilie Townes, who in Breaking the Fine Rain of Death writes of the “deep moral character” of “communal lament,” Sprinkle calls on all people of good conscience to remember and mourn LGBTQ people who have died as victims of hatred.

In addition, we can contribute to safety, freedom, and justice for all LGBTQ people by organizing for political action to eradicate hate crimes, by working to pass enforceable protection laws, by working toward a better society where no one fears to live openly as they are created to be, and by arousing within ourselves and others “the spiritual resources and moral courage to confront religious intolerance and bigotry, so often the accomplices to hate violence in our world.”

I am proud to be a member of EEWC that takes part in the solution to hate crimes by confronting religious intolerance and by taking an open and affirming stand for LGBTQ persons and all persons.

I highly recommend Unfinished Lives: Reviving the Memories of LGBTQ Hate Crimes Victims. It is a must-read book for everyone who wants to contribute to social change so that all are free to become all we’re meant to be. Additional stories and advocacy opportunities are included on the website: