Home Book Reviews Where Am I Wearing? A Global Tour of the Countries, Factories, and...

Reviewed by Kimberly B. George 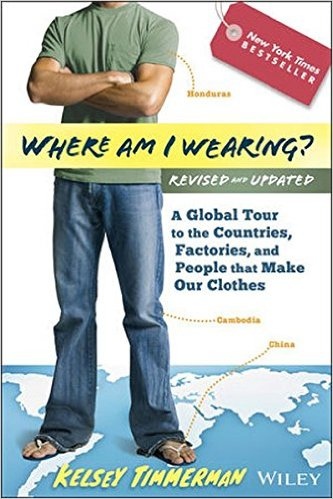 For most of my twenties, I’ve bought the majority of my clothes secondhand, a lifestyle choice I’ve made for several reasons. For one, I am a writer and a graduate student living on a limited budget. Second, I shop at thrift stores because something in me loves the thrill of the hunt—stalking items at Goodwill seems to reenact the hunter-gatherer skills coded in my DNA.

But, there’s another aspect to my motivation beyond frugal budget or evolutionary impulse: I shop secondhand because I carry unresolved guilt about whether or not I should be directly supporting stores like Gap, Banana Republic, and J.Crew. I don’t know their ethics; how they treat their garment workers; or whether they are polluting lands I will never set my eyes on. I just don’t know, and I’ve feared that if I actually educated myself, that my ambivalence would be gone and I would just be left with pure conviction that something is very wrong and I am complicit in this system. So, I moderate my guilt by purchasing these clothes only after another consumer has first paid the brand new price tag.

When I started reading Where Am I Wearing: A Global Tour to the Countries, Factories, and People that Make Our Clothes, I was expecting to get answers for my ambivalence. But, I didn’t get answers. The book’s author, Kelsey Timmerman, just helped me arrive at new questions about the complexities of globalization, the garment industry, and poverty—and my role in it as a consumer.

Timmerman’s research began with the simple act of checking the labels on his clothes, curious about places of origin for his shirt, jeans, boxers, and flip flops. He then decided to travel to those places—Honduras, Cambodia, Bangladesh and China—to go undercover as a garment buyer in order to meet the people who made his clothes. He wanted to know not only their working conditions, but also their names, personalities, and dreams. He wanted to somehow bridge the divide between producer and consumer and put faces to the industry.

In his travels, he meets Dewan and Zhu Chun, parents working 16-hour days in a factory in order to send money home to their child in the village—a 13-year-old son whom they haven’t been able to see in years. And he also meets children who work at the same factory jobs in order to have the money to send home to their parents who live in rural villages at some distance from the cities where the factories (and jobs) are found. These workers made it clear that they didn’t want consumers to stop purchasing their products; rather, they depended on American consumerism for their jobs. And while their jobs clearly exploited them—underpaying them or even not paying them at all some days—having the job was always better than not. This was the bind Timmerman found over and over: America’s gluttony was feeding globalization and exploitative practices, and yet to just stop buying the products was not going to help these workers.

Timmerman’s research led him to discover that 97% of America’s clothing is imported. It’s cheaper for companies to export production to developing countries, where jobs are scarce and therefore wages can be set low.

He discovers that Levi Strauss & Company—the maker of his jeans and a brand known at one time for its strong ethics— had been one of the last U.S. garment manufacturers to succumb to outsourcing production.  And while the company has tried to hold to basic human rights guidelines for its factories [you can read those principles on its website, www.levistrauss.com], it sources from over 40 countries, and many steps of production are now outside its jurisdiction.

As Timmerman explains, “Levi’s workers at the San Antonio factory were getting paid $10 to $12 per hour before their jobs disappeared. Now, Levi’s doesn’t pay garment workers. They pay factories. And those factories, such as this one in Cambodia, barely pay their workers $12 per week” (p. 128).  And yet, the corporate decision makers at companies like Levi’s would likely claim that they had to outsource their production just to keep their business viable—that it would be impossible to practice their original ethical principles as fully as they might like amidst the demands of today’s garment industry.

What Kind of Change Is Possible?

In this past decade, the reality of these “sweatshops” and the child workers who often are employed by them has drawn needed attention in the press. Activists have worked hard to put pressure on policymakers in Washington and to educate the consumer. But even so, most people continue to buy clothes made from garment factories with conditions that would be considered exploitative. Most consumers still have little concept of the kinds of lives led by those who make their clothes.

Yet, Timmerman doesn’t make the issue black and white. He doesn’t want to belittle the jobs of the people he met on his travels; but at the same time, he does want to be an engaged consumer who is conscious of the complexities of poverty and globalization. He recommends researching the companies you are buying from to see if they belong to an organization like Fair Labor Association, and he specifically recommends buying from Patagonia, Inc., JusticeClothing.com, OrganicClothes.com, and NoSweatApparel.com.

No Easy Answers, Plenty of Questions

After wrestling with Timmerman’s  research, I still don’t know whether Jesus would buy a shirt from Gap. I still don’t know if buying from companies who employ child labor is fundamentally all bad, when the reality is that my not buying the shirt does not translate into food on that child’s dinner table—or even assure that the child has a table on which to eat. In a world where people experience abject poverty, and therefore are stuck in jobs that do not pay them fairly, what are the ethics behind my purchasing the work of their hands? I am left with unresolved yet urgent questions.

After reading Timmerman’s book, I am also left wanting to know more about how the economies of developing countries would do without the forces of globalization, which in practice seems to look an awful lot like economic imperialism and colonialism all over again.

And yet I also realize that in the immediate, the garment industry is providing jobs, which these workers need as their society transitions from agrarian to industrial. But the workers—in the midst of the transition—also need fair wages and basic human rights. We who live off their backs are yet complicit in the exploitation—even if we haven’t totally figured out the ethics of shopping at Gap.

The consumers still hold a great deal of power. You and I as consumers—thousands of miles from the source of production—still have the platform to pressure companies to change their practices. But will we?  And if so, how do we go about it?

Timmerman doesn’t really show us. If there was something more I wanted from this book, it was that more space be given to specific ways we as consumers can effect change and be involved in the process of righting wrongs. Perhaps I wanted more clear lines drawn—more moralizing from Timmerman on what is acceptable and not acceptable as a consumer.

But, he doesn’t approach his topic that way. His desire was more to broaden the conversation, point out the complexities, and get us thinking than to provide a clear set of answers.  And in those goals, he succeeds.  After reading this book, you won’t ever again look at the tags inside your clothing in the same way as before you opened its pages.