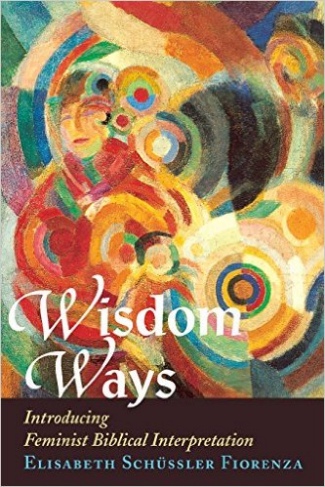 One of the elite Christian feminist theologians currently engaging in the highly specialized academic conversation about gender roles and the Bible is Elisabeth Schussler Fiorenza. She is a prolific author, famous for groundbreaking work in feminist theological scholarship; and I know her activism has touched many members of the Evangelical and Ecumenical Women’s Caucus personally. Aware that Christian feminism must be accessible on many different levels, Elisabeth Schussler Fiorenza presents us with Wisdom Ways, a book intended as a basic introduction to biblical interpretation for feminist activists, beginning Bible readers, and undergraduate students.

Although Wisdom Ways is a profound work that’s not easy beach reading, Fiorenza writes in a clear, straightforward style, mapping out a woman-focused biblical spirituality based on the idea of Wisdom as feminine.

She tells us that as she watched sunlight sparkle on the ocean waves (4), she was inspired with the imagery of feminine Wisdom as a spiral dance. The circling dance–with its connotations of process, fluidity, art, beauty, and energy –symbolizes Fiorenza’s method of interpreting scripture. By listing ways to overcome the roadblocks that the hermeneutical dancer might encounter along her spiral journey (54-74), Fiorenza provides a toolkit of approaches to sacred text.

To push aside Roadblock 1, we dancers must reclaim the word “feminism.” At a time when many people reject the label feminist, and womanists and mujeristas and postcolonialists have been critiquing bourgeoisie white U.S. feminism for twenty years, it is time to redefine the popular understanding of what feminism stands for. For Fiorenza, that definition is political and can be summed up in the bumper sticker slogan, “Feminism is the radical notion that women are people.”

Once the category of feminism has been clarified, then Roadblock 2, the misconceptions about who can be a feminist, can be challenged. Fiorenza starts by explaining the place of men in her interpretive framework, but moves beyond male-female dualisms to challenge our monolithic sense of sex. Consequently, throughout her writings, Fiorenza refers to wo/men written in this broken form to denaturalize and de-essentialize such a diverse category.

Dancing around Roadblock 3 involves understanding the multivocality of feminisms. Fiorenza presents an entire array of feminist options including postmodern feminism, postcolonial and global diversity feminism, and her own category, critical liberationist feminism (59). Fiorenza’s approach to feminism seeks to create an “emancipatory grassroots democratic ethos” (81), in which we do not just point out the injustice of the oppressors, but also create a consciousness of transformation through understanding that all injustice is interconnected. Fiorenza looks to the Bible as a site where these interrelated power struggles play out, and also as the site where many people seeking emancipation find their liberation. Hence, her version of Christian feminism is a counter to kyriarchy, her term for the combination of patriarchy and the overlapping power of social locations.

Overcoming Roadblock 4, the desire to flee Christianity entirely that some people feel when they consider the inherent patriarchy in the Bible, will be a familiar process to readers of EEWC Update. Fiorenza argues that not all feminists can abandon Christianity as a lost cause. The Bible must be regarded as important to feminists, even if one does not embrace its sacred authority, because of the way it affects the material conditions and inner lives of women across the globe.

Roadblock 5 along the path to Wisdom is the belief that there is no practical application for feminist biblical hermeneutics. We can counter with the rhetorical understanding that all reading, whether originating in the ivory tower or not, is interpretation, and that some of the misogynistic interpretations of the Bible offered in popular media and conservative evangelicalism need to be countered with careful scholarship.

We will not dance with divine Wisdom until the oversimplifications about the Bible, or Roadblock 6, are productively complicated. Fiorenza reminds us that the Bible is not a single coherent unit; it is a collection of books, a collection of translations, even a collection of different canonical traditions. How can we understand the Bible as Christians in our Western culture without acknowledging its deep connections to the East, to Judaism, and to Islam? When Christian feminists open up a space to question prevailing interpretations of the Bible, we are challenging Roadblock 7, which is fetishizing the Bible. According to Fiorenza, bestowing the Bible with so much authority that one cannot interrogate it in light of kyriarchy is to worship the text as an idol. No interpretation that supports oppression is sacred.

It is possible that Roadblock 8 is where Fiorenza’s emancipatory hermeneutic and EEWC’s brand of biblical feminism part company. She asserts that arguing for any single correct meaning of scripture is impossible, since there are so many hermeneutic paradigms that would lead one to opposite understandings of the same words. Pages 37-49 describe an array of interpretation strategies, ranging all the way from the Doctrinal-Revelatory Paradigm, which accepts the plenary inspiration of the dictated word of God as the model for the church faithful throughout the ages, to the Rhetorical-Emancipatory Paradigm, which analyzes the text for the power it has to sanction and/or challenge material oppression.

I am concerned that this pluralistic approach to spiritual empowerment locates Fiorenza outside the boundaries of evangelical biblical feminism. Granted, biblical feminists never did embrace scripture unquestioningly, but it’s still important to note that Fiorenza’s writings are further left on the Christian feminism continuum than some of our members would be comfortable with.

Roadblock 9 is so detailed that I’ll return to it after discussing Roadblock 10, the emotional toil of approaching these sometimes painful biblical texts. So many of us were socialized not to question prevailing misogynistic readings of the Bible that to challenge complementarianism takes an immense amount of courage. Fiorenza talks also of the difficulty of facing the horror stories of the treatment of women in Biblical times and today in many different cultures. It takes emotional strength to dance in Wisdom’s spiral.

Finally, in prevailing over Roadblock 9, Fiorenza lays out the elaborate movements of her emancipatory paradigm dance toward Wisdom (pages 169-189). Each of these movements described below is circular rather than linear, interconnected rather than discrete.

The hermeneutics of experience requires us to value women’s perspectives of exclusion and silencing (in all their diversity) as a priority when reading the Bible. The hermeneutics of domination and social location unmask the ideology of reading by asking what are the social, political, economic, and religious structures of domination in the biblical text and in the modern interpretations. Then, the hermeneutics of suspicion challenges the blind respect, acceptance, and obedience for the divine authority of the Bible that so many Christians have internalized as part of their socialization. In place of this wholesale acceptance, the hermeneutics of critical evaluation lets us judge the text as authoritative or not based on its function as emancipatory.

To continue, the hermeneutics of creative imagination encourages us to imagine the material world we’re shooting for. We retell biblical stories (such as the Midrash on Myriam by Chris Schussler-Fiorenza on page 179) and make up new stories to reflect our ideal vision of justice. The hermeneutics of re-membering and reconstruction brings to life the reality of thousands of years and different cultures. But that retelling of stories in modern form fosters an awareness of the rhetorical constructions of the storytellers. Lastly, Fiorenza describes the hermeneutics of transformative action for change, her final destination in the struggle to envision the Bible as a means of emancipating the women of the world. Using these interconnected strategies, Fiorenza arrives at her critical feminist hermeneutics of liberation.

I wish I had created a reading group to discuss the book, so that we could work together through the reflection exercises and writing prompts at the end of each chapter. Fiorenza calls this creating the circle–making a space to dance together in the “ekklesia of wo/men,” her term for the radical democratic assembly of the daughters of God. She also mentions connections to her other books at the end of each chapter, and provides a basic library of Christian feminist theology in an appendix.

Fiorenza appears to have written this book in community as well, as she frequently credits in the footnotes students in her workshops and classes who provided ideas and study questions. In this way, she models the very community of women in theological conversation she advocates in her writing. Indeed, Elisabeth Schussler Fiorenza models an exciting vision of emancipatory feminist hermeneutics for all of us, regardless of the expertise in biblical interpretation we brought to our reading of Wisdom Ways.