Home Book Reviews Womanist Midrash: A Reintroduction to the Women of the Torah and the... 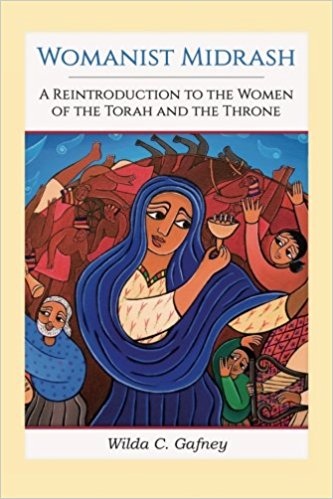 Author Wilda Gafney combines two worlds in her latest release, Womanist Midrash, merging a scholar’s knowledge of Hebrew language and interpretation of Jewish scripture with a womanist hermeneutic. As a work of midrash (from d-r-sh, “to seek”), the book declares its intention to “look and listen for the Word of God in, between, over, under, behind, and beyond the words in the Word” (p. 4), while the author’s perspective, drawing from black women’s feminism (p. 6), contributes special attention to the plight of the marginalized women and girls obscured by the text.

As “Womanists and feminists ask different questions of a text than do other readers, and different questions from each other” (p. 7), Womanist Midrash provides a unique and integral viewpoint to the discussion of Biblical women and the profound depths of their stories. Part One covers Women of the Torah, those included within the books of Genesis, Exodus, Leviticus, Numbers, and Deuteronomy. Part Two interrogates the accounts of royal women of Israel and Judah, Women of the Throne.

The original scripture translations are an important feature of Womanist Midrash, created from the author’s studies of the original languages. These fresh translations present new insights into well-known passages. Illuminating translation deliberations offer a window into the contradictions and wide spectrums of possible meanings transcending the limits of traditional translations.

Gafney’s translations often sing poetic, beginning with Genesis 1:1 with “in-a-beginning” reflecting “spiraling creation . . . multiple contextual ways of hearing, imagining, and retelling these stories;” and in Genesis 1:2, God “she-pulsed” over the water (p. 19). The author aptly reminds the reader of Hebrew grammar characteristics in a restoration of the gender of God’s spirit; that is, “the Spirit, She rested on them” (p. 20.)

The author also highlights disparities between the implications of traditional translations and hers. She notes the gritty realities of words such as amah and shiphchah. Both are typically translated “maid,” but the duties thereof are better reflected in the term, “womb slave,” linking the Biblical women referenced with these words to modern sex trafficking victims (p. 75–77).

Gafney’s razor-sharp gaze on language notices that Ruth and Orpah are abducted or otherwise forced into marriage with Naomi’s sons. In her version, David’s cruelty and vivid threat is evident in his initial meeting with Abigail, often read as a romantic encounter of equals. She sees the correlation of Bathsheba with a lowly farm animal in Nathan’s parable, which might reveal more about David’s empathy than present a value judgment on Bathsheba, and hears Tamar’s battle cries against Amnon.

One revelatory translation analysis contrasts different instances of when one person is described to “love” another, such as Isaac’s love for Rebekah, Shechem for Dinah, Xerxes for Esther, Amnon for Tamar, concluding that “The reader must wrestle with its dissonance” (p. 227–228).

Other astute observations stem from close reading of the Biblical women’s narratives. Readers might notice for the first time that Sarah’s behavior toward Hagar might follow from her own experience of mistreatment; she is a survivor of domestic abuse who then perpetrates this on another woman. Or that Hagar’s name might not be her name but a derogatory epithet. Or that there may be other children besides those specifically mentioned on numerous occasions, daughters, implied by group plurals or selective genealogies, reminding the reader, “these are not all of the names” (p. 87). Or that due to Asenath’s influence, “there will be Egyptian blood on both sides of the slave divide” (p. 72). Or that, chillingly, David’s son Absalom expects that Tamar has been harmed by her half-brother Amnon, and is perhaps complicit in her rape. Or that there could be a portrait of Jezebel’s wedding in Psalm 45.

The strongest retelling might be found in the Numbers section of Womanist Midrash: the exegesis of Cozbi bat Tzur’s tragic wedding scene and the following retribution against the Midianites. The interlacing together of Moses’s conflict with Zipporah, his subsequent second marriage, and his conflict with his siblings, with the wedding and military action are masterful in Gafney’s account and analysis.

One highly effective use of the hiphop womanist observations that appear throughout was a brief consideration of Saul’s curse on Jonathan via a slur against Ahinoam. Here, King Saul refers to his own son as the “son of a twisted rebellious woman!” and invokes her nakedness (p. 190). Gafney points out the analogous “SOB” in modern parlance, again a dig at a person by slandering his or her mother. Given the thoughtful, nuanced approach of the book, other such interjections, offering that Abraham “pimped” out Sarah in Egypt (p. 33) or that the son of Shelomith bat Divri was an “OG” (original gangster) (p. 122) are less developed, perhaps deserving of a lengthier midrash.

The extended creative midrash passages focus on a perspective of one of the women studied, using the author’s “sanctified imagination” to play in and around their storylines. In these sections, she grants Hagar and Athaliah dignity and reverence; imagines women’s first-hand experience of Sinai and being cleansed of skin disease; gives the last word to Bathsheba and Tamar; envisions Absalom’s revenge; and invents female rabbis to debate a verse in Exodus allowing a man to sell his daughter into slavery.

Many of these excursions contribute new understandings of a familiar moment or a cathartic end to a difficult story. For example, Miriam is identified as the people’s prophet, rather than her brother Moses: “She is our prophet, and we are her people” (p. 135). The book sets up expectations for thorough investigation of the women’s stories, so it is jarring on occasions when it avoids engagement with extant midrash. For example, when wrestling with questions about Leah and Rachel’s collaboration or lack thereof in the deception of Jacob, or Rachel’s theft of the teraphim, the author prefers a sola scriptura approach.

As the introduction acknowledged, “teaching women’s narratives is important work” (p. 9). Womanist Midrash is highly engaging as the author makes her linguistic and narrative points accessible for the layperson and scholarly reader alike. Both groups have much to consider and discuss from this work. This reviewer expects Womanist Midrash will occupy a prominent place on her own theology shelf and inspire continued creative engagement with women of the Bible.