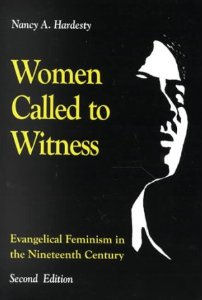 When Mr. Granger warned our eighth-grade history class that “those who do not know their history are doomed to repeat it,” I knew even then that he was wrong on two counts.

First, even those who do know where they come from often repeat elements of their history. Second, such historical repetition does not necessarily spell doom; in fact, it can be quite a blessing. Nancy Hardesty’s Women Called to Witness: Evangelical Feminism in the Nineteenth Century reminds today’s biblical feminists that not only do we share many of our scriptural reinterpretations with women like Lucretia Mott, the Grimké sisters, and Elizabeth Cady Stanton, but we also share with them a deep-seated religious motivation for our actions.

Women Called to Witness suggests that the American women who led the battles over temperance, female ordination, abolition, and woman suffrage in the 1800s were motivated by their evangelical Christian faith. In the Second Great Awakening revivals, which touched the lives of each of these female crusaders, Charles Grandison Finney articulated the religious importance of political protest and social reform.

Hardesty proves that historically, “evangelical activist” is no more an oxymoron that “Christian feminist.” Women like Frances Willard, Antionette Brown, and Phoebe Palmer expressed the perfecting work of the Holy Spirit in their souls by purposely blurring the lines established by the Industrial Revolution between public and private, male and female, and politics and religion.

Instead of proceeding chronologically or dedicating a chapter to each female reformer, Hardesty has centered each chapter of the book around a different topic, such as temperance, preaching, prostitution, and race relations. Hence, the reader is encouraged to sew this patchwork of information together according to her personal interests. For example, as a student of rhetoric, I was particularly interested in Chapter 6, “Directly to the Bible,” where Finney’s hermeneutic assumptions are described and his followers apply the Bible to questions of slavery, voting, and the ministry. The primary audience for the book, evangelical college and seminary students in classes on revivalism and women’s history, will especially appreciate the connection between religious faith and social action illustrated in Chapter 5, “Religion is Something to Do,” and Chapter 8, “Aim at Being Useful.”

The newly-published second edition of Women Called to Witness traces the roots of nineteenth-century secular change to the religious commitment of its female leaders in much the same way as the original 1984 Abingdon Press publication, but there are some exciting additions. The preface has been expanded to include a personal narrative of the development of the book, the textual citations have been reformatted for easier reading, and the endnotes have become more systematic. Most importantly, the last chapter, which connects the first-wave pioneers to second-wave theologians like Hardesty herself, has been updated to include the story of the development of the Evangelical and Ecumenical Women’s Caucus (EEWC) and Christians for Biblical Equality (CBE) and a vision for the future of biblical feminism.

What History Can Teach Us

How might a knowledge of the conflation of religious and social issues in nineteenth-century women’s activism serve as an inspiration for today’s Christian feminists? In one sense, we have been presented with a yardstick by which to measure second-wave biblical feminist efforts. Have we, inspired by the same biblical interpretations and imbued with the same Christian spirit, responded to twentieth-century issues with the same impact on secular society as our first-wave feminist foremothers? I recommend reading Women Called to Witness alongside our second-wave Christian feminist manifestoes to get a richer sense of the movement’s historical continuities and disjunctions.

I asked Nancy about the relationship between Women Called to Witness and one of those influential second-wave texts, All We’re Meant to Be, which she coauthored with Letha Dawson Scanzoni. Here is an excerpt from the interview:

Alena: “I was interested in your statement in the preface to Women Called to Witness that you and Letha had created your feminist arguments in All We’re Meant to Be without having read [Lucy] Stone and Stanton, etc. Do you feel you just ended up repeating nineteenth-century arguments unawares, or do you believe second-wave biblical feminists’ arguments are different?”

Nancy: “Yes, we did [write] All We’re Meant to Be without having, more importantly, read Grimké or Mott or Antoinette Brown.Yes, in many ways we reinvented the wheel all over again.And as I watch younger feminists today who seem totally uninterested in biblical arguments, I have a feeling often that all our work will be submerged, and in 30-50 years another generation will emerge that will have to meet all the `biblical’ arguments against them again and they’ll reinvent the wheel once more. On the other hand, we also discovered and invented new arguments in response to the ways that the arguments were posed in the 20th century.”

In another sense, a knowledge of our history also provides us with a frame through which to view our future. How will the next generation of evangelical feminists preserve the history of their foremothers, using the lessons of the past to confront the challenges of their future instead of trying to reinvent the wheel yet again? Hopefully, those who do know their history will be blessed to repeat the finest, most relevant parts of it.

I’m sure we learned about Elizabeth Cady Stanton and Frances Willard in Mr. Granger’s eighth-grade classroom. But in addition to names of other women reformers who would enter my consciousness later, we also should have learned that for those women who made such an impact on our history, “church” and “state” were mingled in their hearts. And faith and social action were mingled in their lives.