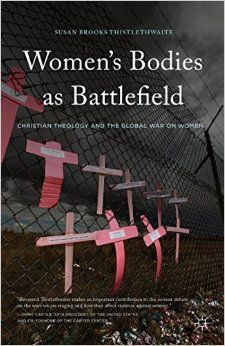 The Reverend Dr. Susan Brooks Thistlethwaite is Professor of Theology at and former president of Chicago Theological Seminary. Her published work covers a wide scope of topics. Some well-known titles specifically of interest to feminist theologians include Casting Stones: Prostitution and Liberation in Asia and the United States with Dr. Rita Nakashima Brock (Fortress, 1996), Lift Every Voice: Constructing Christian Theologies for the Underside with Mary Potter Engel (Orbis, 1998), and Sex, Race, and God: Christian Feminism in Black and White (reprinted, 2009, original 1989).

In her soon to be released book, Women’s Bodies as Battlefield: Christian Theology and the Global War on Women, Susan Brooks Thistlethwaite sets out to address the ways in which Western models of war and peace affect the global War on Women. Using the models of Pacifism, Just War, and Just Peace as guidelines, Thistlethwaite connects historical and theological understandings of embodiment, as well as the ways in which the oppression of female bodies/embodiment can be traced through history to the present day.

Thistlethwaite begins with an historical understanding of the “strategic physicality” of war. This focus reminds the reader that war, at the most basic level, is concerned with which side can out-injure the other. This point becomes extremely important in when considered in conjunction with the War on Women because, as Thistlethwaite notes throughout the book, the War on Women is not a war between two equal sides, but rather a war fought on top of the bodies of women. Throughout the text, Thistlethwaite pushes the reader toward a “critical physicality,” rather than the more traditional “strategic physicality.” This “critical physicality” seeks to disrupt the normalization of violence against women.

To reach her goal of disrupting the normalization of violence against women, Thistlethwaite moves the reader through a variety of historical understandings of both war and the perceptions of women. Delving into topics such as the religious, philosophical, and Christian roots of both war and the War on Women allows Thistlethwaite to educate the reader on the complexity of the historical indoctrination surrounding the topics of war and women, without entirely overwhelming those readers who may not yet be aware of the history surrounding these issues.

Following the historical analysis, Thistlethwaite offers compelling and, at moments, somewhat depressing analyses of a variety of contemporary media examples of the War on Women. She explores in detail the various ways that the War on Women is perpetuated through movies such as Star Wars and Maleficent, and books like the Lord of the Rings series. Though many active feminists will not be surprised by such realities lurking within these media sources, the depth of connection that Thistlethwaite draws from these examples to support her point is impressive and thought provoking, even for those of us who consider these types of issues on a daily basis.

Throughout the book, Thistlethwaite continually returns to the historically upheld understanding that woman are equal to chaos, whereas men are equal to order. Within this framework, chaos (women) must be eradicated no matter what the cost, so that order (men) might be maintained. By using a basic concept such as this as a primary framework, Thistlethwaite is able to not only strengthen her primary goal of connecting Western models of war and peace to the War on Women, but also to put forth compelling arguments against the concept of Just War by placing these constructs on “new” ideas of “Just Battering” and “Just Rape.” When directly connected with those ideas, the concepts of Just War as it has been understood and executed in the West become indefensible.

This book provides the reader with a plethora of things to consider! While the book is certainly an accessible read for people from a variety of social locations and interest levels, it is also, at moments, quite heavy. The majority of Thistlethwaite’s reconstruction, or directly constructive theology, takes place in the last chapter and conclusion rather than being presented more gradually throughout each chapter. While this is an effective way for her to outline her points and, ultimately, to support her arguments, reading about all these difficult realities without an immediate action plan or “silver lining” being offered is at moments quite depressing. That being said, the last chapter and the conclusion put forth a truly inspiring and attainable action plan for moving forward to put an end to the War against Women worldwide. This book is entirely rooted in culture, lived experience, historical understanding, and, above all, it offers a hopeful roadmap for praxis that will lead to a life-giving future for all.