Home Book Reviews A Year of Biblical Womanhood: How a Liberated Woman Found Herself Sitting... 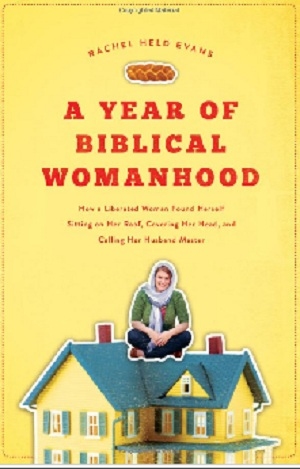 You need to know the name Rachel Held Evans: she’s currently one of our best hopes of getting the message of Christian feminism out into the discourse of popular culture.  She’s a 32-year-old Southern evangelical writer who speaks and blogs full time about the intersection of women, religion, and modern American life.  Although I don’t post to the flourishing community commenting on her blog entries at www.rachelheldevans.com, I did follow her through the writing and promotion of A Year of Biblical Womanhood, in which she demonstrates the absurdity of trying to take all the Bible’s teachings about women literally for one year.

This book received a lot of attention when it was published last October.  I cheered for the author as she brought her message to the Today Show and The View.  I shook my head over what she termed “Vaginagate,” the dustup caused when LifeWay Christian booksellers declined to carry the book, probably because Rachel dared to use the word “vagina” in telling the story of her teenage abstinence pledge.  I smacked my computer screen when she was slandered online by conservatives who felt she was lampooning the Bible instead of lovingly wrestling with its difficulties.  This isn’t the first time she’s been down that road: Rachel’s first book, Evolving in Monkey Town, was about growing up in Dayton, Tennessee, the location of the Scopes creationism vs. evolution trial.  And this isn’t the first time a writer has made a dramatic point by acting as their own test subject.  A. J. Jacobs’ The Year of Living Biblically and Gretchen Rubin’s The Happiness Project are popular examples of the same kind of experiential journalism.  But there’s something about taking on the impossible task of fulfilling the Bible’s ostensible expectations of femininity that triggers extreme reactions in some Christians.

The Virtues of a Biblical Woman

Each chapter tells the story of one month in the year-long project exploring a different characteristic of biblical womanhood.

My synopsis is meant to reflect the book’s combination of serious engagement with the Bible’s problematic messages about women with the lighthearted wit of Rachel’s breezy narrative writing style.  Each chapter presents her monthly to-do checklist, the story of her experiences, insights from Bible commentaries and leading theologians, excerpts from Dan’s journal, pictures of Rachel throughout her adventures, URLs for further reading on her blog, and a closing Bible study on a woman from scripture.

This book would be a disarming way to introduce a conservative person to the idea that reading the Bible is always an interpretation, and that women and other subordinate groups are the losers when patriarchal interpretations prevail.  The author hits most of the familiar Christian feminist notes: raucous female converts in Corinth, Junia and Phoebe, the open-minded example of Jesus.  I wish she had swapped inclusive language for her exclusively-masculine pronouns for God throughout the book, included end-of-chapter links to other organizations and web resources instead of just to her own blog, questioned the category of “woman” itself with the latest in trans*theory, and owned the word “feminist.”  In her online FAQ she writes in response to the question of whether or not she’s a feminist: “I’m a thoroughly liberated beneficiary of the feminist movement, complete with a blossoming career and egalitarian marriage. I strongly support women at all levels of leadership in the church, home, and society, and am suspicious of anyone who would claim that the Bible presents just one ‘right way’ to be a woman.”  Thus Rachel lays down the reins just where Christian feminists like us are equipped to pick them up and invite her readers to take the next steps of theological education and development.

A Year of Biblical Womanhood is not just for women.  Dan Evans is characterized in the book as a partner who trusts, supports, and respects his wife.  Dan’s example is a reminder that one does not enact “biblical womanhood” in a vacuum; it is always a performance in relationship and community.

Being Feminist, Being Christian: Essays from Academia