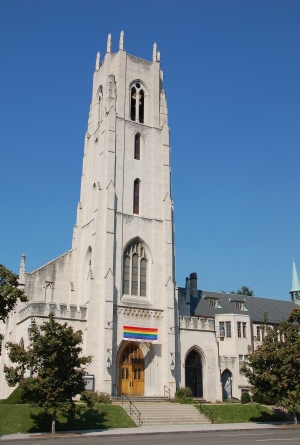 It was our congregation’s last meeting in the lengthy stop-and-start process of deciding whether or not to be a welcoming church for LGBTQ people. The vote had been over 80% in favor; now we had to discuss the political implications of being the first large church in the Virginia Mennonite Conference to make this decision. Nothing was said about our decision arising from a biblical perspective, so I raised my concerns. If congregations want to challenge long-held traditions and negative texts about same-sex sexual expression, shouldn’t we be more clear about theological reasons for doing so?

Afterward, a couple who were long-time pillars of the church, and who opposed the majority vote, approached me with the same concerns. I was grateful they felt comfortable talking about this with me. It was a civil conversation on a controversial topic where so often neither side listens very carefully to the other. Although some of the dissenters have left our congregation, this couple has stayed.

When the shoe is on the other foot

Lesson 10 pointed out ways in which both hierarchical and egalitarian complementarians misinterpret the meaning of “one flesh” in the Genesis creation accounts. But do those whom we might call “progressives” or “revisionists” have clearer and better arguments from a biblical perspective? A constant refrain I hear from traditionalists is that we (I consider myself a revisionist) are just going along with secular culture and ignoring the Bible. Judging by some “letters to the editor” in my church publication, we revisionists are heretics trampling our Confession of Faith. In fact, the majority of Mennonite congregations in Lancaster County, Pennsylvania, are leaving my denomination, Mennonite Church USA (MCUSA).

Over the past year, the national media, including the Atlantic and NPR, have been giving attention to the controversy over this issue in the MCUSA and other Mennonite bodies.

My denomination is hardly unique. Similar controversies have been taking place among United Methodists, Presbyterians, and others. Episcopalians have always been part of the worldwide Anglican Church. Their decision to ordain gay leaders has deeply offended Anglicans from other parts of the world where homosexuality is considered both immoral and illegal.

Criticism about some American Christians’ adapting to a more permissive secular society is probably accurate. Many people get used to what’s happening around them and leave the underlying moral reasoning to the experts. For example, in spite of the Sermon on the Mount, we can slide imperceptibly into the materialism and militarism of our culture. So also in our society’s rapidly growing acceptance of LGBTQ people, including same-sex sexual intimacy, some Christians have yet to wrestle with the underlying moral issues and relevant biblical principles.

Revisionists who do care about the Bible and moral behavior put forth two major arguments. The first is to stress the overarching biblical themes of love and justice. The Old Testament prophets declare that Yahweh is far more concerned about “doing justice and loving kindness” than the ritual requirements of the law (Micah 6:8; Hosea 6:6; Amos 5:21-24). In the New Testament, Jesus himself never refers negatively to same-sex sexual expression. And in Acts 8, Philip baptizes the believing transgender eunuch without hesitation. Why wouldn’t God approve of consensual, loving, mutual same-gender sexual relationships?

Second, revisionist biblical scholars have examined the texts that refer negatively to non-heterosexual sexual behavior (Lev 18:22; 20:13; Gen 19; Judg 19; Rom 1:26-27; 1 Cor 6:9; 1 Tim 1:10; Jude 7). Though interpretations vary in the details, these scholars conclude such texts say nothing about sexual orientation or love-based, consensual same-gender sexual relations and certainly nothing about gay marriage. Rather, they are addressing rape and inhospitality, or pederasty, or the practice of sexually abusing one’s slaves, male or female.

Revisionist scholars believe the historical distance between our culture and the ancient Mediterranean cultures of the Bible is so great that these texts simply do not address the current reality of loving, mutual, same-sex relationships. As Robin Scroggs puts it, “Biblical judgments against homosexuality are not relevant to today’s debate. . . . not because the Bible is not authoritative, but simply because it does not address the issues involved” (The New Testament and Homosexuality, Fortress 1983, p 127). Other examples of revisionist biblical scholars are John Boswell, Jack Rogers, Dan O. Via, Dale Martin, and William Stacy Johnson.

Is the Bible helpful or not?

Although I agree with both of the above principles, they have seemed incomplete. If we have no biblical guidance about same-gender sexual relationships other than love and justice, does the Bible say anything helpful about human sexuality at all? If incest or polygamy or sex with a minor is consensual and loving, for example, why are such relationships forbidden or illegal even in our permissive culture? Or why were certain heterosexual actions that appall us today commanded in scripture—such as a raped woman’s being forced to marry her rapist (Deut 22:28-29) or levirate marriage where a childless widow must marry her dead husband’s brother? (Deut 25:5-10). James Brownson’s book, Bible, Gender, Sexuality (Eerdmans 2013, reviewed here), raises these questions and then explores these issues from canonical and cross-cultural perspectives.

Later, we will use Brownson to help us look at the larger picture. For the next lessons, however, we will examine in more depth the texts which refer to same-sex behavior in negative terms.

1. How is your church congregation or denomination (if you belong to one) handling the LGBTQ issue?

2. How extensively have you or your church studied this issue? If it is a welcoming church, how did you get there? If not, did the church make a conscious decision, or just refuse to deal with it?