Franklin Graham’s ideology regarding LGBTQ people might be summed up as, “Since God won’t hurt you people and your friends, I’ll have to do it myself.”  Just where are those lightening bolts when you need ’em?

On his Facebook page, Graham called for his followers to begin boycotting businesses that are LGBTQ friendly. 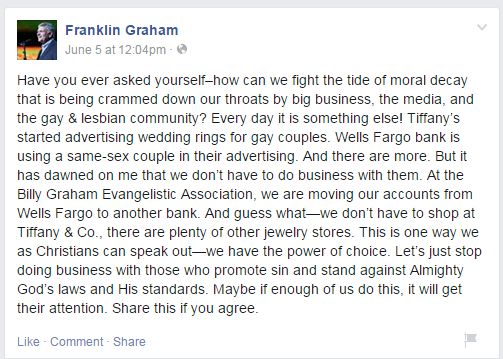 As a representative of one of the groups bringing you the “tide of moral decay,” I’d like to take this opportunity to urge you to SUPPORT the following businesses.  They are using their media reach to help, not hurt, a segment of the population that has taken more than enough abuse over the years already.

And there are many more!  I think it’s going to be tough going for Franklin, keeping track of everyone he needs to boycott.

In case you were not aware, the Human Rights Campaign surveys the larger employers in the US each year, rating them on criteria relevant to Gay, Bisexual and Transgender Equality practices, and publishes the results in their Corporate Equality Index.