Home Articles Adam After Eve: A Form of Mitsvah When Two Become One

Most Jews know that, according to Jewish tradition, sexual activities between a husband and a wife are a Mitsvah (a spiritual exercise and a religious commitment). Many Jews know that lovemaking on Shabbat is a double Mitsvah.

Some Jews know that the Kabbalah (the Jewish mystical tradition) teaches that the Shekinah (the feminine presence of God) rests on a Jewish man when he makes love to his Jewish wife on Shabbat. Many non-Orthodox rabbis have expanded all these principles to apply to any loving couple, Jewish or non-Jewish, gay or straight, and especially those who realize they are part of a new age community.

I will continue to use the traditional gender terms for Adam and Eve so the radical teachings in the Jewish mystical tradition about sexuality remain evident. This is what happens to mankind, Adam after Eve, when two become one: “Therefore a man shall leave his father and his mother and hold fast to his wife, and they shall become one flesh” (Genesis 2:24). Because it is not good for mankind to be alone, God provided Eve to Adam as help-mate, partner, companion, and wife; woman was taken out of man’s side and built from his own flesh.

Genesis 2:18 says God made for Adam an ezer k’negdo (an phrase that means a help-mate opposite or against him). But the word ezer connotes strength and is usually used in reference to God’s power to help (Psalms 33:20, 70:6, 115:9, and 146:5), so a better understanding of the term is that woman was created to be a parallel, helpful force equal to man.

As the rabbis taught, woman was created from man’s side to underscore that she was not meant to walk ahead of him in mastery nor to walk behind him in a subservient manner. She was meant to walk at his side as his equal. The rabbis further taught that the term ezer k’negdo was used to teach that when her husband was right, his wife would be there to support him with her strength, and when her husband was wrong, she would be there with her strength to oppose or restrain him.

But the Jewish mystics went way beyond this. They actually taught that the Shekinah can rest on a man whenever he makes love to his wife with a sense of reverence, tenderness, adoration, and love. The Shabbat simply adds holiness and choosiness to their feelings. The key attitude that is needed is the sense that his partner is God’s gift, the source of his blessings, and the most wonderful manifestation of God’s presence.

But very few Jews know that if, in addition to this attitude, he also makes love to his wife intentionally desiring to imagine a spiritual unification within the heavenly realm as he unifies the earthly one, he and his wife enact a great Tikun – a spiritual mending or uplifting. This Tikun is woven together with similar Tikunim from other married couples into a crown for the Divine One who also unites with his Shekeenah on Shabbat and Yom Tov. Just as the prayers proclaimed in each synagogue are all woven together into a crown for the Holy One of Israel, so, too, are the holy unifications of each couple married under a hupah (a marriage canopy) woven into a crown.

In the past, the esoteric details of how to elevate lovemaking into a Tikun were transmitted orally, and very discreetly, from mother to daughter. These details were based on the seventh chapter of the Song of Songs, a biblical book that Rabbi Akiba proclaimed to be the holiest song in all the scriptures.

A wife who desires to enable her husband to fulfill the Mitsvah of Tikun coupling should direct him to begin by kissing and creaming her feet (Song of Songs 7:2). Then she should direct him to slowly and reverently work his way up to her crowning, flowing hair that entangles a King/God (7:6) thus allowing him to climb the palm tree (7:9) and perform the unification below which is woven into the unification above. Over the years, the spiritual uplift of this Tikun becomes greater and greater.

Even fewer Jews know that the holy Kabbalist Rabbi Isaac Luria developed several Tikunim to enable spiritually aware Jewish couples to use their imagination to repair fractured hopes and intentions in those around them, to elevate broken spirits both near and far, and to re-energize efforts to make life holy. All this through a couple’s own lovemaking at night.

These Tikunim are among those referred to as Tikunay Hatzot – midnight spiritual exercises. Every wife partakes of some aspects of Leah and some aspects of Rachel (the two wives of Jacob/Israel). Like Leah, every woman is potentially very fruitful, both emotionally and physically. Like Rachel, every woman is potentially spellbinding and enthralling. When her husband regards his wife as a gift from God and loves her totally, faithfully, and submissively, his lovemaking and partnership being more to give her pleasure than for his own pleasure, he realizes and actualizes her blessings and God’s blessings. This is especially important when duress makes her weep openly or inside. All forms of Tikun Hatzot stress this.

Sexual activity prior to midnight increases the aspect of Leah. Sexual activity after midnight and in the pre-dawn or early morning hours increases the aspect of Rachel. Sexual intercourse with Leah, better known in Lurianic Kabbalah as the face of Imma, the great mother Goddess, helps to reduce negative actions and situations in family and personal affairs. Sexual intercourse during the second part of the night is with Rachel, who ascends in the morning as Matronita, the ruling presence of Shekinah. Elevating Matronita helps avoid those worst-case public scenarios we fear and helps increases the number of small but important contributions to the improvement of Jewish and world society. One who regards his wife as a gift from God will pray in her intimate presence.

These Tikunim should be done every Shabbat and, if desired, once or twice during weekdays. They are not magic; nor are they imaginary, but if faithfully imagined they always have a positive impact over time.

A Hassidic mystic, Rabbi Nathan Hanover, adds, “After you perform Tikun Hatzot, prepare yourself and unify the Holy One with Shekinah by making your body, each and every limb, a chariot for Shekinah.” Thus, sexual activity should end with the wife above, feeling she is Shekinah, the ruling Matronita blessing her husband by raising to heaven, with her husband below feeling that he serves as a mystical merkavah (chariot), as did the Holy Temple in Jerusalem), elevating his Shekinah wife to the very heavens. This helps actualize the images in their thoughts and desires, and promotes remedies, rectifications, and blessings for those around them and throughout the world.

All this flows from the basic theology of Jewish marriage under a hupah. Kiddushin—holy matrimony for Jews—is a reenactment by two individuals of the holy covenant first entered into by God and Israel at Sinai, when God and Israel first chose each other.

God chose Israel, saying, “You shall be a special treasure for me . . . a kingdom of priests and a holy nation” (Exodus 19:4–5). The Jewish people chose God by answering, “All that the Lord has spoken we will do” (Exodus 19:8).

Torah is the ketubah, the marriage contract, between two covenanted partners. Mitsvot are their daily loving interactions. Torah study and worship are the pillow talk between God and Israel. Tikunim, the Kabbalistic mystical exercises, imaged meditations, and sexuality are the intimacies of married life. The blessings of holy marriage extend far beyond the happy couple. As the seventh of the seven marital blessings says, they bring joy and happiness to the bride and groom and also to the cities of Israel and the streets of Jerusalem (a redemptive Messianic reference).

All who give to others cause Shekinah to dwell upon planet Earth.
All who are self-centered defile the Earth and exile the Shekinah.
The glow of lovers is an attraction and a reflection of her presence.

Shekinah is the flaming 70-faceted jewel of Torah
and the Holy Sabbath Queen of Kabbalah.
She is an immanent indwelling female presence of the living God.
Shekinah is planet Earth’s animating tree of life. 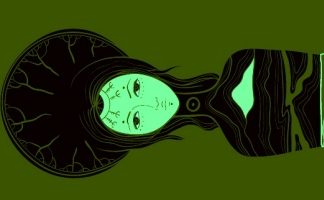 Cherice Bock
I’m grateful that in today’s world, we can “have it all”; we can have careers and families—but this also worries me. Are we as feminists not simply buying into another of our culture’s lies, the promise of ever-more, of consumption and waste, of degradation and disposal?"

How It All Began