Home Articles I Found EEWC and Everything Changed

I am a born again, tongues-speaking Pentecostal who moved from a conservative Assembly of God church to a liberal Presbyterian church with many twists and turns along the way.  My journey started with an EEWC ad placed in the classifieds in a Ms. magazine.

It was the mid-to-late 1980s.  I felt angry, resentful, lonely, and confused. I was irritated by the continual sports and military analogies coming from the pulpit.  I was angry by the demeaning of women and the ridiculing of “women’s libbers” by the leaders in my church. I resented the accusations of pride and usurping authority whenever a woman wanted to serve the church in a leadership position.  And most of all, I was lonely and confused.

Although my husband was sympathetic with my frustrations, he didn’t know how to help me. The Bible was clear about submission, silence, and who could teach and lead within the Kingdom. Every birthday and Christmas he would buy me a book or record by or about a strong woman. He encouraged me to use my gifts and follow my dreams.  We were equal partners in our marriage and in our business.  He was proud of my accomplishments, but he was a fan club of one.

My friends did not understand my frustrations.  My mother scolded me when I complained to her. I knew God valued me as much as any man, but I didn’t know what to do with those damning scriptures.  I secretly identified myself as a feminist, but my church’s denunciation of the “satanic women’s lib movement” kept me quiet.

In a fit of pique, I bought a Ms. magazine and read it cover to cover.  Just buying the magazine was an act of rebellion, and I knew my family and friends would think I had backslidden.  I felt guilty reading it.  And then my life changed.  It felt like God was speaking to me as I read the ad.  I don’t remember exactly what it said. I think it asked me if I felt like I was the only Christian feminist in the world. It gave an 800 number to call to find other biblical feminists.

I called the number, left a message, and within a couple of days received a call from a woman here in Chicago, Juanita Wright Potter.  She invited me to a Daughters of Sarah meeting.*  There I met the most amazing, godly women who understood and shared my frustrations.  They welcomed me and patiently challenged my simplistic, fundamentalist interpretation of the Bible.

I was struggling to embrace my new friends without totally backsliding, when Juanita invited me to an EEWC conference.  I was eager to meet the people who had captured my interest with a tiny ad.  I was excited to meet the authors of the books I had been devouring.  I was no longer alone and wanted to meet more of my sisters.  I had no idea what awaited me at that conference.

One of the workshops I attended, taught by Virginia Mollenkott, was about fundamentalists and Scripture.  Since I felt uncomfortable with some of the liberal theology being taught and some of the conversations I overheard, I was excited about this workshop.  Bible study and memorization (King James, of course) was an integral part of my life.  Virginia started by reading a scripture and giving it a fundamentalist interpretation.  She was right on the mark, and I relaxed.

Then she read the same scripture and explained it as she understood God’s intention.  Holy Cow!  It was as if God shined a spotlight into my brain.  Virginia repeated this process over and over, as I saw my understanding of the Bible that I loved and knew so well collapse.  I was shaken to the core.  I knew I was hearing truth, and there was a huge learning curve ahead of me.

After the workshop, there was a panel by several women who talked about their struggles and suffering as lesbians within the church.  As the conversation started, my discomfort increased because these women all identified themselves as Christians.  I knew the Bible was clear on homosexuality so it wasn’t possible they were really Jesus followers.   Then WHAM, once again God opened my mind to the truth of what I was hearing.  These women did love and follow Jesus, and the church was oppressing them.  The Holy Spirit spoke plainly to my heart that I was guilty of ignorance, arrogance, and sinful judgment.  I was devastated.  At the Q & A time, I stood and publicly repented for my sin and asked for forgiveness.

At lunch that day, I met a charming woman who shared her spiritual journey with me.  She had a Baptist background and had been a student at Wheaton College (a college in Illinois that is often called “the Harvard of evangelical schools”).  She told me about accepting Jesus as her savior and being born again.  She used language to describe her experiences that was familiar and comfortable to me.  She told me she was now a member of a Metropolitan Community Church, which I had never heard of.  I told her of my confusion and guilt during the morning meetings and asked her if she had ever personally met a Christian lesbian.  She looked at me amazed, pointed to herself and said, “Haven’t you been listening? I am a Christian lesbian.”  I was really embarrassed.

She then invited me to come to a meeting that evening of Lesbians and Friends.  At that meeting I met women who have become close friends and fellow travelers on this incredible journey through the Kin-dom.  Their acceptance and kindness has been a gift from a very gracious and forgiving God.  And the adventure continues…

* Editor’s note:  Daughters of Sarah was the name of both an organization and a magazine published between 1975 and 1996.  The group began in 1974 with an informal gathering of eight women at Chicago’s North Park Theological Seminary who decided to meet regularly to study what Scripture taught about women.  Desiring to share new interpretations and uncover unknown, neglected, or seldom-taught messages of gender equality found in the Bible, they began publishing a newsletter called Daughters of Sarah, which grew in circulation and became a much-loved Christian feminist magazine.  After it ceased publication, many select articles were later compiled and published as a book, Wisdom of Daughters: Two Decades of the Voice of Christian Feminism, edited by Reta Halteman Finger and Kari Sandhaas.  Those who have access to the subscription-based serials database of the American Theological Library Society (ATLA), perhaps through an academic institution, can find digitized back issues of the magazine (1984-1996) available for reading online.

Related material:
Watch the video Wanda made for the Not All Like That Christians Project at the 2014 Christian Feminism Today Gathering. 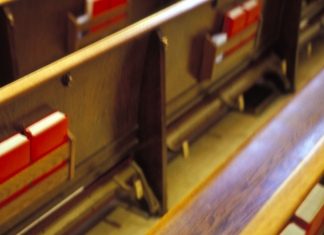 Kendra Weddle
Careful to avoid parking in the reserved "visitor" space, I found my way to a few United Methodist Churches within fifteen to twenty minutes from my house. Comforted that none of my choices turned out to be mega-church wannabes with huge white screens and coffee-house coffee, I felt somewhat hopeful that my opening to faith community would end favorably.