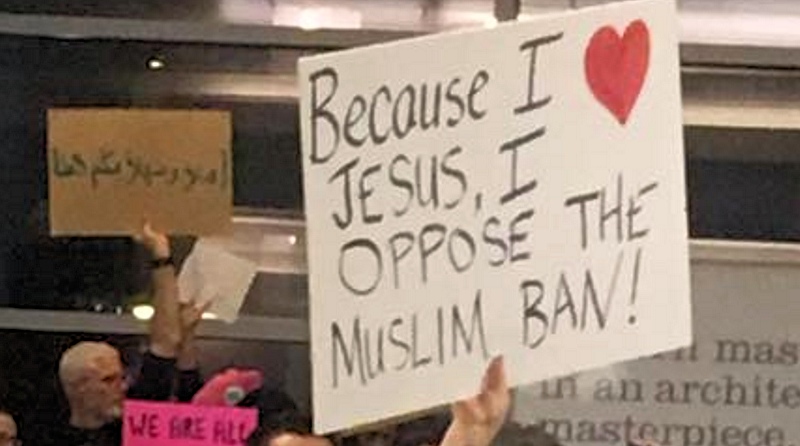 A ViewPoint by McKenzie Brown

I’m writing this reflection after two days of protesting at Dallas-Fort Worth International Airport. Hundreds of us gathered to express our opposition to an executive order that prevents people traveling from seven predominately Muslim countries entry into the United States. Ferocious cheers of “No hate, no fear, Muslims are welcome here,” and “This is what democracy looks like” continue to ring in my ears. I can hardly speak. Every time I do, it feels like shards of glass scraping my esophagus, but it was worth it.

Just a week ago, I was in Washington, D.C., attending the Women’s March.

Before I left for the Women’s March, one of my family members told me he didn’t think protesting would do anything. I asked him what else, after calling and sending letters to my representatives, voting in every single federal, state, and municipal election I’ve been eligible for since I was 18, and volunteering for political campaigns, I should do.

What would be an appropriate display of dissatisfaction? His answer was silence.

The Women’s March represented everything I believe in. It was symbolic of my hope, angst, fear, and desire to affect change, beliefs that had been slow-cooking in my soul for a long time. The march felt like a grand culmination of my identities—the things I cared about—pressed to manifestation by a nationally galvanizing political climate.

When I thought about attending the march, I imagined the energy of the Women’s Liberation Movement in the 1970s. I imagined being in a crowd addressed by the likes of Gloria Steinem and Angela Davis. I imagined polishing my social justice and feminist credentials by taking my place next to other activists working to advance the rights and status of the oppressed and marginalized.

Even though this was not my first march, I now realize I allowed myself to romanticize what was, in fact, a very serious political moment. 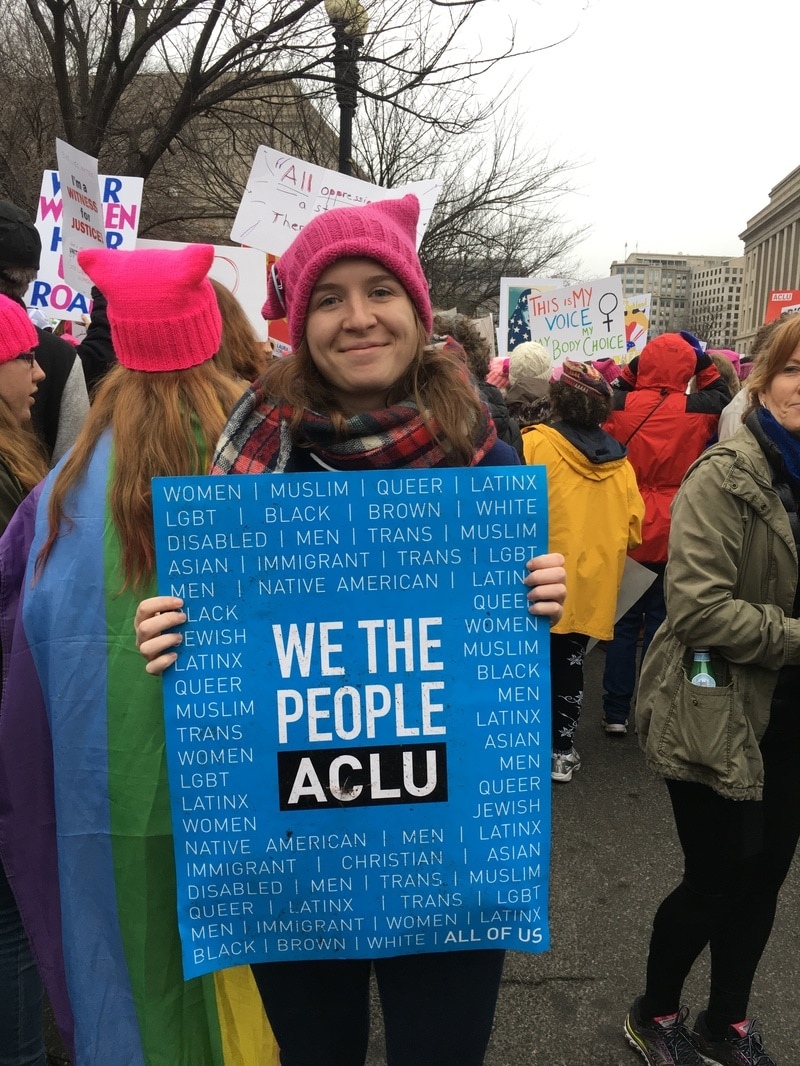 On Saturday, January 21, I held my ACLU sign, wearing my Wendy Davis shirt, and joined with millions of individuals gathered to make manifest our concerns for the integrity of our country. Despite criticisms that the Women’s March lacked a unified vision, I felt that a unified vision is exactly what it communicated. The emphasis on intersectionality, visible on the stage, visible in the crowd, visible in the signs people carried, seemed to be an expression of what MLK called our “inescapable network of mutuality,” a concept that is certainly more salient than ever.

As the day unfolded, I was constantly on the verge of tears, especially in moments when my eyes shifted to look over the thousands of people extending far into the distance.

I was moved by the sight of the multigenerational crowd—people who had started marching decades before and younger ones marching for the first time—all wearing their pink feline knitwear. Seeing the older people in the crowd, I considered what my life would be like, decades from now, when I was their age. Would I be marching still? Would there be a young woman looking at me wondering about her future? It brought to mind the words of former governor (then-Treasurer) of Texas Ann Richards in her famous keynote address to the 1988 Democratic National Convention when she spoke of the “continuity of life that unites us, that binds generation to generation, and ties us with each other.”

When Gloria Steinem, Angela Davis, and other fixtures of American social justice addressed the crowd, my romantic notion of the march met with the reality of the political moment. My sense of euphoria faded as I became aware of feelings of anxiety and fear. I began to understand how tragic it was that such a demonstration was even necessary. The reason millions of people were gathering all over the world was our anticipation that the coming season in American history would exponentially exacerbate the suppression and oppression of already marginalized human beings.

No one with good sense would wish for a broken arm so they could experience the sympathy and affirmation of collecting signatures on the cast.

The other night, my niece and I laid out a pallet and watched Finding Dory. I checked the news on my phone intermittently, my eyes shifting from my newsfeed to her small presence, which was obscured by surrounding mounds of blankets and pillows. I wondered if there would be a more hopeful time when I would have to try to explain to her the depth of division splintering the country after the 2016 election. If, like Ann Richards, I would explain how we prevailed during these troubled times and a more unified vision of justice and equality was brought into being. Or if I would find myself in a position to explain the history of the continuous erosion of civil rights and liberties that activists and marchers, despite our best efforts, were unable to stop.

I don’t want to have to protest again. I don’t want to be in a position where I must exercise my civic responsibility to stand and defend other human beings from a political leadership who would oppress them. That said, as an individual who has inherited the freedoms and privileges of American citizenship, it is a responsibility I cannot choose to ignore right now.

It’s time for an appropriate display of dissatisfaction. It’s time to lose our voices from shouting, to collect blisters from marching and wear them like medals, and to rack our brains attempting to cultivate empathy and understanding.

An expanded version of this post was published on Mustard Magazine, a digital space serving Christian college students.