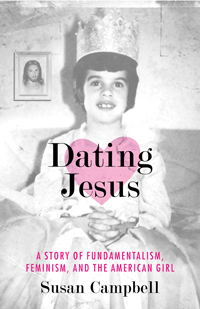 Several times, I have had vivid dreams about dating Jesus.  Once, we were frying eggs together to feed multitudes of people at huge banquet tables, and although we had only a few eggs to start with, they never ran out.  In another, Jesus was driving a car and I was sitting next to him.  Suddenly, to my horror, I saw in the rearview mirror that a large glob of mucus was hanging out of my nose. But before I could clean myself up, Jesus reached over and wiped the mucus away with the most exquisitely tender touch I had ever experienced.  At such a humiliating moment, how could anyone have been so gentle as to leave me glowing with an astonished joy? (Whenever I remember that dream, I feel the lovingkindness of Jesus’ gesture all over again.)

So naturally, I was drawn to a book entitled Dating Jesus. As I soon discovered, Susan Campbell did not so much dream about dates with Jesus as use them as a metaphor for enforcing upon herself the fundamentalist model for a “good Christian woman,” even after the instincts began to pull her in a much livelier direction.

Despite our age difference, we had so very much in common in our early years, Susan Campbell and I! Like mine, her church had “no central hierarchy, opting instead for home rule by a group of older men, the elders.” Her Bible was the King James Version, and later the New International Version; and like my own KJV, it was “scored with pen and pencil underlines.” Both of us were “in church every time the doors were open.” Women could not speak in church services or teach boys, past the age of twelve; but we memorized “great swatches of the Bible” anyway.

Although our preachers paid no attention to the Bible’s literary or historical context, we were assured that ours was the only true New Testament church. Susan knocked on doors, earnestly seeking to rescue people from Hell; I gave out Bible tracts for the same reason. But had we met as youngsters, Susan and I would probably have felt it necessary to part company, because (horrors!) her church did not teach eternal security, did not buy into dispensationalism and the Rapture, and didn’t celebrate Christmas because it was not dictated by Scripture.

On the other hand, perhaps Susan Campbell’s mischievous and fun-loving nature would have swept doctrinal differences out of my mind, and we’d have been friends. Certainly it is love of life that makes this book—and Campbell’s columns in the Hartford Courant —enticingly easy to read. (“Fetching” is the word that springs to mind.) Campbell’s style romps happily from formal where needed to down-home whenever possible: “Dead people look like wax candles that have lost their wicks.” A “fundamentalist is an evangelical who is pissed off about something.” The attraction of fundamentalism is that it offers “a definite yes or no when you’re not comfortable with the maybes.” The conservative churches of Christ are “frontier revivalism frozen in amber.”

She begins to dream about Dame Julian of Norwich, the 14th century Christian mystic who had visitations from Christ in female form. And for years after her anger drove her out of the church, Susan Campbell wishes she could have been like Dame Julian, letting nothing come between her and her God. She hopes that after all her searching for believable feminist biblical scholarship and “arm-wrestling” with God, she will be “allowed to see her face. She will look nothing like me, and when she opens her mouth and speaks in the deepest voice imaginable, she will say, ‘Darlin’, what took you so long?’” And I for one think that this is a sublimely realistic hope.

By the final chapter, Susan Campbell has connected with Letha Dawson Scanzoni, has discovered EEWC and Christian Feminism Today, and has realized that “the entity I dated through high school and college and into my early adult years was emphatically not Jesus. It was someone else’s idea of Jesus, but not the real one. I dated the wrong one. I gave my heart and my soul—literally—to a construct that had only a small basis in fact.” Notice the skill with which Campbell slips us a postmodern insight as part of her personal narrative!

Susan Campbell is one of those heterosexual and strongly-nonconforming women whom I included under the transgender umbrella in my book Omnigender.  She explains that she “didn’t necessarily want to identify as a girl” because she had “seen the future as a girl and it looks pretty bleak.” After many pages of describing her “virginal angst” about dating boys and eventually men, she suddenly mentions a husband and supplies a gleeful footnote: “Surprise! . . .Yes, I am a mother and a wife. It happens to the least qualified among us.”

In the newspaper columns that she calls her “bully pulpit,” Campbell frequently writes about justice for gay, lesbian, bisexual, and transgender people—and sometimes gets accused of being one of us. (That’s the way the majority enforces ignorance concerning the lives of marginalized people: anyone who supports our cause runs the risk of being marginalized along with us.) As Campbell sees it, “There’s a whole army of us, regardless of our orientation, who have been made to understand that we don’t fit in and aren’t entirely wanted, that we are somehow unclean, unworthy.” The Evangelical & Ecumenical Women’s Caucus exists precisely to empower that army of misfits. And we can be mighty grateful for voices like Susan Campbell’s and books like Dating Jesus that will help us in our task.

Reframing the Coronavirus Outbreak: The Spiritual Practice of Social Distancing and...