Home Book Reviews Fat and Faithful: Learning to Love Our Bodies, Our Neighbors, and Ourselves 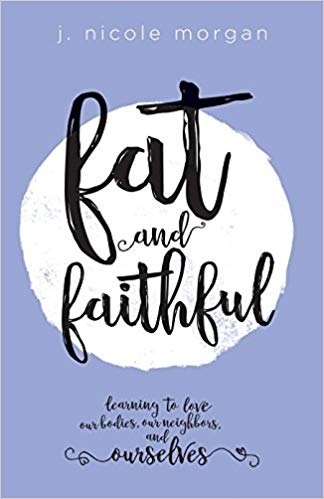 This weekend’s Washington Post report on Paige Patterson’s return to the pulpit shows how necessary J. Nicole Morgan’s work is.

Patterson is the former president of the Southern Baptist Theological Seminary, fired in May because of his misogynistic comments and mishandling of sexual abuse claims. He chose in his return to preaching last week to question the legitimacy of the #MeToo movement, and apparently thought the pulpit was the best place to body-shame women, in particular those who are fat. In a sermon during a Christian revival, Patterson described a woman who “filled the door,” made a joke about the baptistery and her weight, and said that she could play linebacker for an NFL team.

The audience, there ostensibly to express their love for Jesus, laughed. Let that sink in: a pastor, let go from his job four months ago for his misogyny, chooses to body-shame a woman, and people laugh because, apparently, fat jokes are still funny in church and can lead people to the Lord.

The inexplicable willingness of Christians to discriminate against fat people is at the heart of Morgan’s excellent new book, Fat and Faithful: Learning to Love our Bodies, Our Neighbors, Our Selves. Morgan has been fat for much of her life and has faced significant discrimination because of her body and its size. A good portion of that discrimination has come from the church itself, and Christians have sometimes been her harshest critics. When even sermons (such as Patterson’s) use fat people as an object lesson; when nearly every discourse on the seven deadly sins focuses on gluttony and the eating choices of fat people; when churches host countless Bible studies on how to diet God’s way; when Christians consistently ostracize and malign fat people, we quickly learn that thinness is next to godliness and that being fat is not only shameful but also outside of God’s will.

In her book, Morgan deconstructs the many cultural messages we hear about fatness and, in the process, affirms that fat people also reflect the image of the Creator no more and nor less than do those who are thin. Morgan’s reclamation of a term often considered derogatory, “fat,” is one powerful step toward that affirmation. “I use the word fat specifically and intentionally throughout this book,” Morgan writes. “Fat is an adjective. It speaks to the amount of flesh on a person’s body. From a social/political context, this self-naming as fat is about destigmatizing fat bodies and pushing back the way fat bodies are treated.”

Fat and Faithful does the hard work of destigmatizing fat in part because Morgan is willing to share her personal experiences as a fat person, laying bare the pain and alienation she has felt as a woman whose body is consistently scrutinized and too often found wanting. Her vulnerability is definitely a strength in this text but so, too, is her ability to call out Christians for their bigotry against fat people, bigotry that is fueled by a misinterpretation of scripture and an unwillingness to see fat people as likewise created in the image of their Creator.

In many ways, Fat and Faithful offers a biblical hermeneutic that challenges the most sacrosanct mythologies about women’s bodies: that women’s bodies are made primarily for the male gaze and for male pleasure; that a biblical woman will be aesthetically pleasing, with culture itself (rather than the Bible) deciding what a pleasing aesthetic is supposed to be; that women’s bodies are unclean; and that they serve as a prison of sorts for the soul. Morgan rightfully names these mythologies as lies, showing that gnostic beliefs about body/soul dualism fail to account for the many biblical passages that note the goodness of our bodies, fat or otherwise.

In a chapter on “the body as a temple,” for example, Morgan argues that verses used to clobber people—to tell them they need to treat their bodies in a way different than they already are—have been misinterpreted as a means of shaming those who are fat. Having heard “countless times” that 1 Corinthians 6:19–20 was a message against fatness, Morgan felt a certain freedom when she discovered that the verse “glorify God with your body” (1 Corinthians 6:19–20) was, according to countless Bible commentaries, not about food or diets, physical health or weight, but about sexual immorality. Knowing the verses’ context, she asserts, affirms that the passage should not be used “as a weapon or a tool for body conformity.”

While the biblical exegesis is a vital component of Fat and Faithful, I was especially challenged by the last few chapters, where Morgan provides specific advice for how to be a fat-positive community and how to live a fat-positive life. Morgan’s journey toward fat acceptance informs the advice she provides, as does the grace she extends to others who still struggle with shame about their bodies and the space they occupy in the world. She compellingly argues that churches and parachurch organizations should extend the same kind of grace, making sure that their buildings, their physical spaces, even their choir and baptismal robes, be created with accessibility for all in mind, including accessibility for those who are fat.

Again and again, Morgan comes back to her central claim in Fat and Faithful: that each and every one of us is made in the image of God, no matter our body size or ability, no matter how close we come to fitting others’ standards of beauty. Our bodies are “worthy of love and care and dignity,” Morgan writes, and “It is reasonable to expect our communities—especially communities of faith—to be places that acknowledge that truth and invite us in to life-giving community.”

Fat and Faithful calls all of us to extend love and care to others, no matter who they are or what they do. The book also reminds us that love and compassion are at the heart of Jesus’ message, something Paige Patterson may want to remember at his next church revival, when he is tempted to make jokes at the expense of women’s bodies and fails to recognize that his best material is not so funny—or godly—after all.

Loyalty and Betrayal among Beloved Friends—John 13:18-38