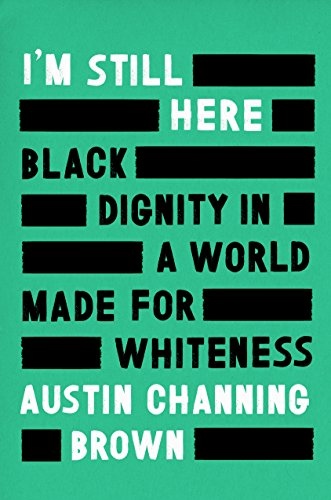 As a Christian feminist and progressive, I spend a lot of time patting myself on the back, believing other people might be racist or sexist or otherwise close-minded, but certainly not me. It’s easy for me to assert my bona fides. I seek to be inclusive in my language and in my actions; I champion diversity in the classes I teach; I have two teenage boys who are not white and with whom I’m carefully navigating an educational experience that has not been wholly positive, given their place in a majority white school.

Austin Channing Brown’s new book challenges me to check myself, and I am grateful that it does. I’m Still Here: Black Dignity in a World Made for Whiteness is exactly for those of us who believe we’ve already arrived, that we don’t need to interrogate ourselves and the ways we might be impeding attempts to create racial justice in a world that is decidedly unjust, to people of color especially.

I’m Still Here is framed around Brown’s compelling personal narrative. “White people can be exhausting,” her narrative begins, especially those white people who also expect Austin to be white and are disappointed—even incredulous—when Brown shows up and challenges expectations: about whiteness, yes, but also what it means to be a Black woman, to be a Black person of faith, to find and claim dignity in a world that seeks to undermine the personhood of those who are Black.

Born in Ohio, her parents choose the name “Austin” for practical reasons: they believed that when she was older and looking for a job, prospective employers would more likely invite her for an interview if her name looked white and male on applications. Her life has been one of pushing against expectations, in the workplace and elsewhere. As a child, Austin straddled two worlds; she attended a predominantly white elementary school where she was only one of several Black students, but at home she was immersed in Black culture. Her parents talked about Black achievement at the dinner table and introduced her to Black authors and music. She learned from a young age what it meant to walk Black through a world made for whiteness, recognizing that, while she “knew all about the world of my white teachers and peers, they didn’t seem to know a thing about mine.”

When Brown was ten, her parents divorced, and she spent summers in Cleveland with her mother, who lived in a neighborhood populated mostly by Black people. The cultural dissonance of this move was difficult for Brown, who at first was called an “Oreo” by her peers because she seemed so white inside her Black exterior. In time, though, she embraced her Black identity, thanks in some part to the Black church she attended, which gave her “the greatest sense of belonging” she had experienced. “Slowly, over time and in layers, Blackness had found me,” Brown writes. “It found me and changed my life.”

In several subsequent chapters, Brown explores her educational experiences at a Catholic high school and a Christian college, where she learned how deep and wide the erasure of Black culture and history might be. She made intentional efforts to learn about Blackness despite a curriculum built by white privilege, and she recognized the persistent thrum of racial discord that existed in her school settings despite racially diverse student populations.

I admit to being especially convicted by these chapters, perhaps because of my vocational work in Christian higher education, and am challenged to consider the ways I have marginalized Black voices in my classrooms—or have had Black voices marginalized for me. Always aware that I need to diversify my curriculum, I wonder why I haven’t done more to make sure other colleagues also understand the significance of teaching more than a token Black author each semester.

But I was also struck by the realization that, in all my education, I’ve only been taught by one Black woman, in third grade, and that I’ve never experienced a person of color as a supervisor or administrator over me. Ever. Surely this sustained immersion in whiteness distorts and limits my worldview. And not just mine, but that of nearly every colleague at my institution. While I have long campaigned for more women in administrative roles, knowing this gender representation is needed for our institution to thrive, I have never fully considered how people of color in administrative roles and as faculty peers are also necessary if we are ever to reach all our students and if we are ever to create a space where racial justice reigns, which is the work to which Christians are called.

I’m Still Here clearly articulates that Christians are called to seek justice, and compellingly argues that systemic racism, white fragility, and the myth of “nice” white people means that true racial reconciliation has not been realized. Instead, Brown compellingly argues, white Christians like to use the term “racial reconciliation” to mean all manner of diversity efforts, most of which focus on white people—their feelings, their misplaced earnestness—and which employ superficial strategies: “asking lots of racial questions over a cup of tea,” or “celebrating various ethnicities and cultures every month,” or counting how many “ethnic” people attend your church. Brown writes that “too often, our discussions of race are emotional but not strategic, our outreach work remains paternalistic, and our ethnic celebrations fetishize people of color.”

Reconciliation is hard. It requires structural change. It sets aside the hurt feelings of white folks and centers the experiences of those who are marginalized and powerless. We are called to this work, to this “ministry that belongs to Jesus. Jesus, who left the comfort of heaven and put on flesh, experiencing the beauty and brutality of being human . . . through this divine experience of death, life, and reunion, we find the capacity for the work. In this, we see why reconciliation can transform not just our hearts or our churches but one day the whole world.”

Reading Brown’s excellent book is challenging because it points out my own blind spots, the places where my white fragility and my desire to be “nice” complicates my longing to be a justice warrior. For all my rhetoric about honoring the dignity of all people as image bearers of God, I have not always acted in ways that reflect that ideology. I’m Still Here is prophetic, calling us all to do better, bearing witness to the powerful persistence of Black voices who remind us, again and again, that their lives matter too.

Assimilate or Go Home: Notes from a Failed Missionary on Rediscovering...