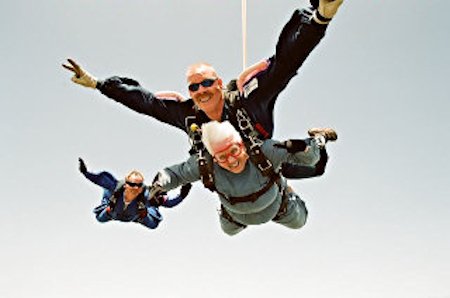 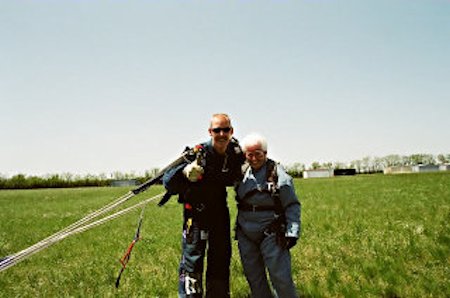 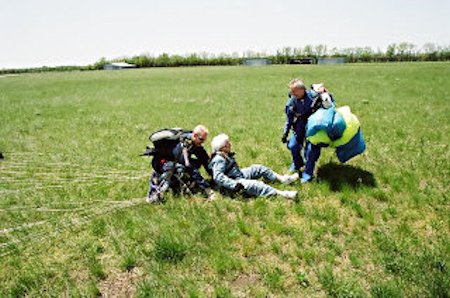 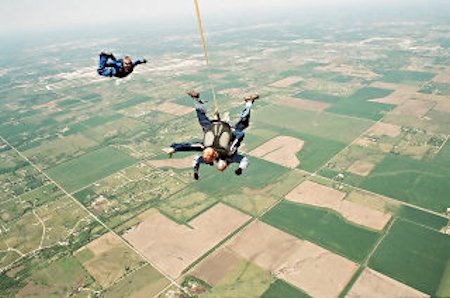 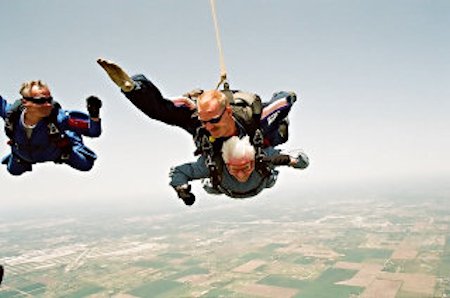 Why would anyone want to jump out of a perfectly good airplane?  I’m still pondering the answer to that one.  All I can say is, I had wanted to do that for a long time and had made a promise to myself that I would skydive before I turned 80. This was my year.

So on Mother’s Day, May 11, 2008, I kept my promise to myself and jumped out into thin air at 10,000 feet, in tandem with an experienced jumper.  The first 30 seconds we were in free fall, dropping 5,000 feet at 120 miles per hour. Wow! What fun!  Then the parachute opened and our fall came to a jerking stop, and the chute lifted us back up again like a fast elevator.  From that point we glided quietly and beautifully down the final 5,000 feet to a very easy soft landing.

After saying “I can’t believe you did that!” some friends have asked me, “What was it really like – to jump and then fall so far and at that speed?”  My first response has been that it was absolutely so much fun that I can’t even explain it. Anyway, my mind was not in an analysis mode dropping at that speed!  But in retrospect, some after-thoughts have come to mind about three  issues: (1)  feeling compelled to do something, (2) believing I could do it, and (3) taking risks.

In fulfilling our dreams, we can take risks both boldly and wisely, which is quite different from dare-devil, foolish risk-taking. Before getting into the plane I watched a film that explained the details of what I was about to do. I was shown the equipment being used, the procedure from boarding the plane to jumping out of it, what to do on the way down, and how to land.  I was informed of the risks involved, and I signed a paper that said the only person responsible for any negative consequences of this skydive would be me.  In spite of it all, when it came down to it, I assumed their expertise and chose to do what I knew I had to do, regardless.

Thinking back, I remember so vividly the time my mom encouraged me to believe that I could do anything I set my heart on.  I believed her then and I still do. There have been so many times in my life I have stepped out into thin air, not knowing what would really happen to me. In 1946, when I felt that God wanted me to be a missionary, I got on a Greyhound bus one rainy day, with fifty dollars in my pocket that my mom gave to me, and I went off to Bible school, all on my own, to prepare for the mission field. And on another late night in November 1959, I took another courageous step when I went on board as the only passenger on a slow freighter headed for Inchon, Korea, to work at a missionary radio station. Jumping from a plane seems metaphoric for numerous times I have, in spite of uncertainties and the known and unknown risks, simply believed and trusted as I took a leap of faith to do something I felt compelled to do.

As the years of my life keep accumulating, there are some activities that I can’t do any more.  I would love to go backpacking in the Cascades again, for example, but my knees tell me “no way!” Yet, there are still choices that I am making that give me a sense of ministry and also fulfillment — like volunteering at Episcopal Social Services, supporting important causes, spending quality time with my life partner, keeping informed and learning from the Internet, keeping in touch by email with friends far and near, working out at the health club, taking care of our home and pets, and “being there” for my older brother who is 91 and lives all alone.

Having fun has always been a priority for me too, so now I have a new list of other adventures that I want to do before I am 85! I want to go whitewater rafting again, go horseback riding on my favorite beach, take a long road trip to visit old friends, ride in a helicopter to look down the mouth of  Mount St. Helens — and at least one more time, I want to jump out of an airplane and fly like a bird again.

Mark Follin, a photographer/jumper with both still and video cameras on his helmet, joined us on the plane.  When we reached 10,000 feet, he opened the door and crawled out onto the wing so he could take pictures of me, attached to the tandem diver, Martin Myrtle, as we prepared to jump.

After we jumped, Mark followed us down and took pictures of us in free fall.  When our chute opened, he continued in free fall and opened his chute closer to the ground and was already there and ready to take pictures of us as we descended and landed.  After the jump, they gave me the still camera film and the DVD, and we have their permission to use the photos with this article. Both men are on the staff of Air Capital Drop Zone, Wichita, Kansas. 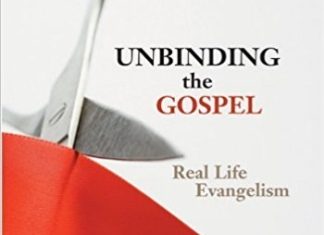 Letha Dawson Scanzoni
“An old idea that everyone has bought into—I don’t care what part of the church—is the idea that if we believed certain things we’d be safe. In conservative congregations, it means we won’t go to hell. And in liberal ones, it means we’ll be part of a community that’s doing vibrant social action.”

When Everything Changed: The Amazing Journey of American Women from 1960...