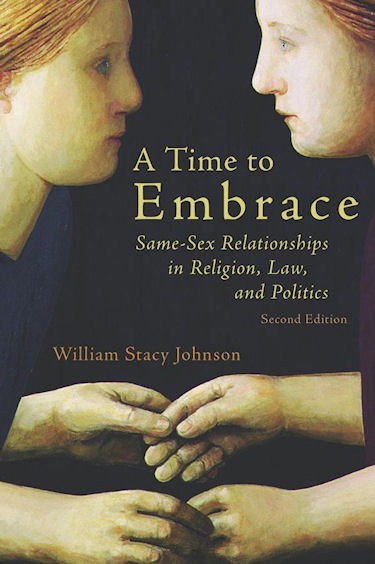 A Time to Embrace summarizes in clear and explicit language all the best scholarship to date concerning homosexuality in the Bible, in law, and in political policies. It is, therefore, the one book to buy if a person wants to catch up on all the reasons for supporting same-sex marriage, yet can afford the time and money for only one book.

William Stacy Johnson is the perfect author for such a volume: an attorney, a professional theologian, an ordained Presbyterian minister, a professor at Princeton Seminary, and a student of over 270 specialized books and articles and 95 relevant legal cases. After all that study, his conclusion is firm: “same-sex unions should be consecrated within our religious communities, validated within our legal systems, and welcomed within the framework of our democratic polity. A welcoming and affirming stance, I believe, is vital to the integrity of our religious communities, imperative for the self-consistency of our legal system, and necessary for the long-term well-being of our democratic culture” (p.3).

Like any good attorney, Johnson is careful to outline his method. He does not attempt to provide an ethic for human sexuality in general, although many universal insights do emerge while he sticks to his announced topic. He opens by presenting a range of seven moral and theological ways of perceiving same-sex relationships, discussing the strengths and weaknesses of each position within the Christian construal of reality as an unfolding drama of creation, reconciliation, and redemption. The seven categories are these: (1) categorical prohibition; (2) toleration; (3) accommodation for certain cases considered to be “the lesser of two evils”; (4) legitimation; (5) celebration; (6) liberation; and (7) consecration, with full religious blessing. In the process of presenting these categories, Johnson demonstrates that “biblical prohibitions were addressed to specific hedonistic or exploitative forms of sexual conduct, not to those in which mutuality and concern for the other were paramount” (p.4).

Johnson then provides evidence that recent legal decisions concerning gay rights are of two basic types: equality arguments, which intend to secure for gay people the same legal benefits taken for granted by heterosexuals; and liberty arguments, which aim at protecting the integrity of gay lives from “unwanted interference” from the majority (p.4). And finally, Johnson argues for the renewal of a “welcoming democracy,” meaning a democracy that “encourages free participation on the part of all citizens” (p. 5).

As Johnson fleshes out his outline, it is a joy to see how faithfully he adheres to providing evidence for every statement, dropping helpful insights all along the path he has chosen. Even the footnotes contain many flashes of insight: for instance, that the word translated abomination is used not only about male-on-male intercourse but also about sex with a menstruating wife, worshipping other gods, making idols, eating non-kosher food, offering a blemished sacrifice, using dishonest weights and measurements, remarrying one’s wife after she has lived with another man, and other behaviors. (In other words, Johnson shows the concept of abomination to be a “thoroughly culturally conditioned concept” (pp. 312-313, note 59).

In another footnote, concerning Robert A. J. Gagnon’s The Bible and Homosexual Practice, Johnson raises an issue that should give pause to those Christian egalitarians who have interpreted scripture in ways that liberate women from restricted roles but who are not willing to recognize the full equality of LGBT people: “Gagnon gives us no persuasive reason why we should break with tradition and ordain women but at the same time genuflect to tradition in being anti-gay” (p. 32, note 108). Indeed, it would be a big mistake to skip Johnson’s informative footnotes!

But the main text is also replete with sparkling insights. I will cite just a few that were especially helpful to me. Having been driven to attempt suicide by my family’s fundamentalist interpretations of Romans 1, I treasure Johnson’s several discussions of that chapter, especially his connecting Paul’s use of against nature in Romans 1 to his use of the same language in Romans 11. In chapter 1, Paul declares certain gentile sexual actions “unconventional or contrary to nature” (para phusin); in Romans 11:24, Paul uses exactly the same phrase “to describe God’s own action of including these gentiles within the covenant of grace” (pp. 104-105). By this standard, being “unconventional or contrary to nature” is not so terrible. What a relief!

I love Johnson’s emphasis on Genesis 2:18 (“It is not good for the human one to be alone”). Rightly, he calls it “the most important verse in all of Scripture for the gay marriage debate” (p.123). This is not a new insight, but it cannot be repeated often enough.

I also appreciate Johnson’s treatment of Matthew 8:5-13, where Jesus heals a centurion’s “boy” (pais, servant, in Matthew; but doulos, slave, in Luke 7:2). “One of the functions a slave would perform for a Roman soldier was sexual gratification”; so the “boy” would probably have been a sex slave (p. 147). Yet Jesus did not rebuke the centurion, but rather Jesus praised his faith! Again, this is not a new insight, but Johnson’s articulation is perhaps clearer and more emphatic than previous discussions.

It is also helpful to be reminded that “reformers such as Luther and Calvin insisted that the covenant of marriage is made by the two parties themselves, not the church, and that it should be regulated, not by the church, but by the civil authority” (p. 198). Therefore, current attempts to make same-sex marriage legal without requiring any church to perform the ceremony are very much in line with Reformation thinking.

It was in the legal case of West Virginia State Board of Education v. Barnette (1943) that the Supreme Court declared that “fundamental rights may not be submitted to vote; they depend on the outcome of no elections” (p. 216). Although this case dealt with permitting Jehovah’s Witnesses to refuse to salute the flag, it nevertheless states “a bedrock democratic principle” that is being violated every time a state puts same-sex marriage on its ballot for a public referendum. Hence Johnson appeals for what he calls a “deliberative democracy,” in which citizens “reason together about their differences, and all citizens—of all convictions—are invited to participate on an equal footing” (p. 217). Johnson’s description of how deliberative democracy would work sounds to me almost like heaven on earth.

Johnson’s words are brilliant concerning Galatians 3:28: “it is not just one’s status as male or female that is declared irrelevant for one’s identity in Jesus Christ; it is also the foundational reality of gender itself, the pairing of male and female, that has no ultimate hold on the new community seeking to live out the gospel. Invoking ‘gender complementarity’ or even ‘gender identity’ as a fundamental basis for drawing ethical distinctions of status or worth. . .has no support in the gospel according to Galatians 3:28 (p. 157). Listen up and be encouraged, transgender Christians! And listen up and be challenged, church leaders who are deciding whether or not to confer equality on people who dislocate the binary gender construct!

Johnson closes his argument for consecrating faithful monogamous same-sex relationships with this comment: “It is time to embrace those who for so many years have earnestly longed to be treated as equal and valid parts of the human family” (p. 251). Obviously, his book would be excellent for church study groups, personal study, or adult discussion groups of any kind.