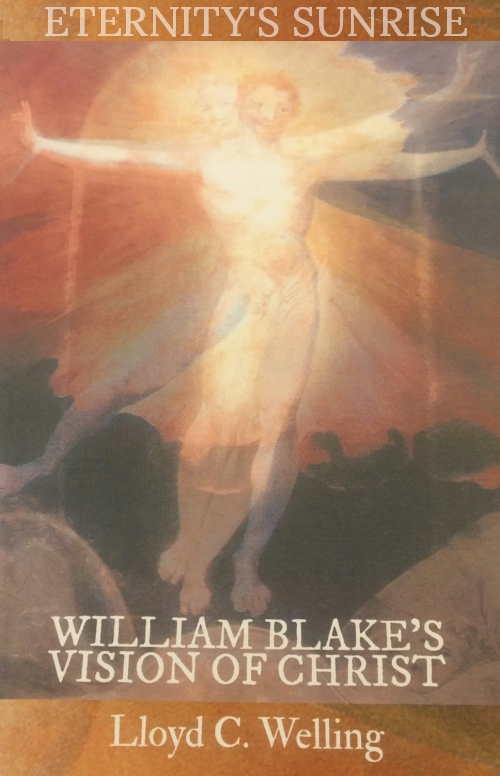 He who binds to himself a joy
Does the winged life destroy.
But he who kisses the joy as it flies
Lives in Eternity’s sunrise.

If you can sense the profound wisdom in that paradoxical quotation, and would like to experience more such wisdom, then Lloyd Welling’s beautiful new book was written for you.

William Blake (1757-1824) is widely recognized as the greatest intellect among British poets, and my friend Lloyd C. Welling has spent a lifetime studying his short poems, epics, watercolors, engravings, and all the scholarship that has accumulated since Blake’s life on earth. Like his mentor, John Milton, Blake recognized that he was not ultimately the author but more “the secretary” of the art that flowed through him from Eternity. And like Milton, Blake dedicated himself to justifying (clarifying) the ways of God to humankind. But Blake differed from Milton in his constant emphasis that the Self (the Christ, the Divine Energy, the Eternal Mind within each human being) is constantly waiting to be recognized by those whose doors of perception have been cleansed. Blake would have agreed with his American counterpart, Walt Whitman, that “everything has an eternal soul… And a mouse is miracle enough to stagger sextillions of infidels.”

I do not recommend that anyone approach the long epic poems of William Blake without the guidance of Lloyd Welling or other Blake scholars. The epics are difficult, dense, and full of bewildering symbols that are easily misunderstood. Welling’s thesis provides overall guidance: one must never forget that Blake’s dialectic holds “seeming contradictions in a productive tension.” Blake’s own way of saying this is that “Without contraries is no progression. Attraction and Repulsion, Reason and Energy, Love and Hate, are necessary to human existence.”

This insight is essential because it simultaneously corrects the errors of extreme religious orthodoxy and naïve optimism. Many orthodoxies teach that if we are “right with God,” our lives will be free of pain, and certain positive thinkers promise a life of joy without woe. But Blake insists that although God is like a father who wants his children to be as happy as he is, nevertheless we are inevitably creatures of joy and woe:

“Under every grief and pine
runs a joy with silken twine.”

Body and soul, reason and imagination, immanence and transcendence, humanity and divinity – to hold exclusively to one pole of Blake’s dialectic will always lead to problems.

This balancing of life’s contraries is a vision that helps me personally. I have often felt like a failure because I have to struggle against judging others, have to remind myself repeatedly that my true essence is eternal, and continually have to clean up my fear and separation by looking at life through the eyes of the Christ. But from Blake’s perspective (and that of Process Theology) my very struggle to remember my undying Center while living within the flux of time and space is precisely what I contribute to the evolution of consciousness from the original chaos of Genesis 1:1 to the perfect harmony of the New Creation.

In other words, there is no need to blame myself for failing to transcend my ego 100% of the time. Excessive ego-affirmation is dangerous – I saw that in many of my college students who thought they deserved A’s just for showing up. But excessive focus on ego-transcendence is also dangerous, breaking the balance that is essential to the pulse of human life. While I am here as Virginia Mollenkott, the Absolute Divine Energy has “embodied” itself in my (ultimately illusory) body. So it is vital that I accept both my finite struggles and responsibilities and my Eternal Center. This world matters. Bodies matter. Human justice matters. And enlightened enjoyment of Eternal Bliss here and now also matters.

As a child, I was taught the biblical doctrine that God is omnipresent. But at the same time I was taught that God created ex nihilo (out of nothing), which would mean that in the beginning there was both God and also not-God. And I was taught that I was born with original sin and needed salvation, so again there is a state of not-God and a state of God. In eternity, there would be heaven (God) and hell (not God). So obviously, fundamentalist Christians do not really believe that God is omnipresent. Blake and others who share a dialectic of contraries are embodying the panentheistic vision of Ephesians 4:6, that there is one God “who is above all, and though all, and in you all.”

Here in this transient world, inevitably our every deed is both positive and negative. If I give to this organization, I neglect other organizations that are doing equally good work. If I give all my energy to this cause, I lack energy to devote to other equally worthy causes. When I turn on a light, I cast a shadow. If I can learn to live relatively calmly within such contraries, discerning eternal happiness beneath and beyond the spectrum of opposites, I can live in eternity’s sunrise.

Lloyd Welling’s book is not only full of brilliant insight: it is beautiful to look at, with a glorious cover depicting Albion (the True Human) and the resurrected Christ, and featuring 22 colored illustrations and all 21 plates of Blake’s Job Engravings. Skillfully Dr. Welling describes the mutual enlightenment that stems from studying Blake’s drawings in conjunction with his words. And Welling explains why certain misunderstandings of Blake have arisen, such as the charge of misogyny, showing that a deeper grasp of Blake’s symbols reveals his belief in the equality of women with men. With great wisdom Welling interacts with the Bible, process theologians, and literary and art critics, in order to clarify and honor the greatness of William Blake. But above all, it is for the reader’s opportunity to grow in grace that I highly recommend this book.

Embracing the Other: The Transformative Spirit of Love