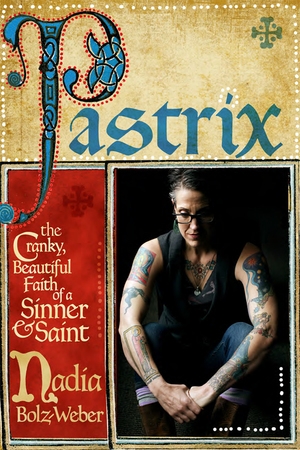 “Shit,” I thought to myself, “I’m going to be late to New Testament class.”

Boom! You had me — and all the sinners who would be saints — at “shit.”

And with that opening line, the Rev. Nadia Bolz-Weber is off and running in her searingly honest and ultimately fabulous memoir, Pastrix: The Cranky, Beautiful Faith of a Sinner & Saint.

As you may have surmised already, this is not your mother’s spiritual memoir. It’s not your sister’s either, unless your sister is a tattooed stand-up comedian with a foul mouth (but only when it’s desperately needed).

The author is my sister in Christ, only she’s much cooler. She, too, was raised in the church of Christ (we were taught to lowercase the “c” in “church” so as not to take away from the glory and the power of “Christ,” and yes, I’m not kidding), that fundamentalist tribe where we don’t have instrumental music, we don’t have female clergy, and we don’t have much fun, either, so those of us who blow out of those hard pews often hit the skids pretty spectacularly (present company included). More on that later.

I bet she and I know a lot of the same get-your-ass-to-church hymns. She, too, began to question early. But she took her questions off the deep end, and still managed to swim back to become a Lutheran pastor — I know! Lutheran! — who is completely fearless making her profound and profane way to the holy. She blazes her path as an imperfect human with a perfect tone in telling her story. Here’s an example from a time when a known con man showed up at her Denver church:

…my first instinct was to try to get rid of him. You know, like Jesus would do. Ugh, Jesus. He always seems to be showing up when I want him to politely just keep out of my business.

She wrote this book for people like me, the unchurched, those who are too damaged, scarred, scared or pissed to return to a pew — people who are not traditionally religious, who, as she says, maybe listen to “This American Life,” who have more education than money, who for all our preciousness still want some kind of transcendent moment in our lives. We are the people looking for what the Pastrix (she took that word, which can be every bit as damning as the word “bitch,” and made it her own) calls the “redeeming, destabilizing love of a surprising God,” one that won’t fit neatly into any one pew – or one religion, for that matter.

Maybe it’s because I come from the same, stiff-necked tribe, but one of the more moving parts of the book came, for me, at the end of Chapter 2. Bolz-Weber is telling her parents — died-in-the-wool washed-in-the-blood-of-the-Lamb Christians— that she has been called to be a pastor. You’d expect all kinds of fire and brimstone from adherents of a religion that refuses to accept women into the pulpit. And you’d be wrong. While her parents sat looking at her new Mary Magdalene tattoo, she tells them that she’s switching her degree track at the seminary from an academic degree to a pastoral one. Her father rises, picks up his well-worn Bible, and Bolz-Weber prepares to be run through with the sword of God. But from the page to which he turned, she could see her father was reading not one of the clobber verses of Paul, but one from the Hebrew scriptures, from Esther.

“But you were born for such a day as this,” he said to her and all across the country daughters who’ve ached to hear those words shed tears at the destabilizing love of God, and that of a father.

She dedicated her book to her parents, and rightfully so.

Read closely her experiences as a hospital chaplain in Chapter 8. It is beautiful and heartbreaking. Read, as well, Chapter 12, which she titled “The Haitian Stations of the Cross.” A more cogent exploration of why bad things happen to innocent people you’d be hard pressed to find. And read this:

For far too long, I believed that how the Church of Christ saw me, or how my family saw me, or how society saw me, was the same as how God saw me. But I began to realize something that is painfully obvious on the surface, but something that almost all of us are blind to: Our identity has nothing to do with how we are perceived by others.

For her family wanted Vacation Bible School, and Bolz-Weber wanted The Ramones. Her family wanted her to marry and become someone’s help-meet (I still pucker when I hear or read that word), and Bolz-Weber wanted to live her own life. She took a turn through addiction, with an ever-so-brief touch-down at Pepperdine, a fabulous opportunity which didn’t take. And though she walked away from her girlhood church, she wanted that community that the church of Christ – for all its flaws – offers in spades. She found the first inkling of that at an AA meeting in Colorado on New Year’s Day 1992. She was six days sober and bored with the God-talk, when it came to her that she’d have to “become God’s bitch” – her words — in order to get her life back.

She waltzed through a Quaker meeting, Wicca gatherings, and did a short dance with the UUs until her new eventual husband – a seminary student — dragged her to a Lutheran church. It wasn’t much of a walk from there to starting her own church in Denver, House for All Sinners and Saints, a home for people who’ve been hurt by the church. From the beginning in 2008, Bolz-Weber’s church offered a radical welcome.

Buy this book. Read this book, and then do what I did and go devour everything else she’s written. You can also find Bolz-Weber at The Christian Century and the God’s Politics blog.  Check out her website here. In an accompanying video, the righteous Rev. Nadia says she hopes the book will end up mattering. Hope no more, Sis. Nadia. Your book most certainly does.