Home Book Reviews When Men Were the Only Models We Had: My Teachers Barzun, Fadiman,...

A Review Essay by Virginia Hearn 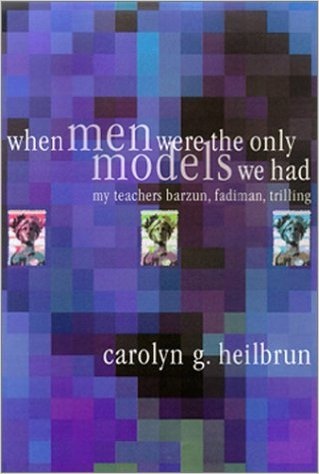 It was astonishing. After the suicide of feminist literary scholar Carolyn Heilbrun, I phoned every likely bookstore in Berkeley, trying to find a copy of her final book, When Men Were the Only Models We Had. None of them, neither the independents nor the chains, had it in stock. Nor did the sources from which those stores get their books. That was hard to believe, since Heilbrun’s contributions to secular academic feminism are comparable in importance to those of Phyllis Trible to biblical feminism.

The title of Heilbrun’s book says it all. Although she became a feminist icon, she had no mentors or women role models during her college years at Wellesley and her graduate work at Columbia. There was little encouragement that her interests would be welcome in the scholarly echelons to which she aspired. In ten intriguing and forthright (sometimes acerbic, sometimes humorous) chapters, Heilbrun describes three males whom she admired as a young woman and who personified her ambitions: Clifton Fadiman, Lionel Trilling, and Jacques Barzun.

“Theirs was the universe in which I wished to have my being. . . . [And] had it not been for the women’s movement of the twentieth century’s last three decades, I would have had to choose . . . between my inevitable exclusion from this brilliant, beckoning world or my half-life as an ‘exceptional’ woman—never a full member of these men’s fellowship but clinging to the edges of it.”

She knew Fadiman only through his writing, always elegant and clear, in which he never hid his “prevailing and consistent scorn for women in his literary world.” But a graduate seminar at Columbia, taught by Trilling and Barzun, became the high point of her academic study, leading to the realizations that have characterized her scholarship.

Trilling, she observed, designated particular students to be his “disciples”: young men only. To young women he remained “distant and disdainful.” Barzun, however, eventually became her friend — courteous, at times encouraging, always kind. The year after receiving her ’59 doctorate, Heilbrun joined Columbia’s English department faculty, so Trilling and Barzun became, in some sense, her colleagues. In a later interview, she said: “they could not know the anxieties I hid, as a mother, as a woman fearing to be thought too bold, fearing worse to be timid and obsequious and to lose myself”‘ (quoted in Grigoriadis). In 1972, to her relief, she was finally the first woman to be tenured in that department.

“I do not mean, of course, that I expressed feminist views in the dreary masculinist years after World War II. But I never denied the pain to myself . . . Fiction by and about women,” she wrote, “centered on an immature woman whose fate was not yet decided, in disturbing contrast to the questing, destiny-making hero of male fiction” (Grigoriadis, quoting Kress). Seeing that contrast, Heilbrun wanted to reinterpret from a female point of view the characters everyone read about in traditional liberal arts curricula.

Throughout those years, as she began writing her own books with their “women’s studies” focus, rethinking conventional approaches to women’s lives, she encountered both anger and resentment at her failure to worship at the feet of the “great males and whales” of 19th-century literature. Her own specialty was modern British literature (c. 1880-1950), stressing factors unique to women’s experience that male scholars had seemingly overlooked.

Much has been written about Carolyn Heilbrun’s unexpected death in October 2003, only a year after this book’s publication. Why did she end her life? According to an article she wrote for the Women’s Review of Books (WRB), in 1992 she had angrily resigned from her tenured professorship at Columbia (after over 30 years there). Freed from academia, she continued writing: a biography of Gloria Steinem (1995); The Last Gift of Time: Life Beyond Sixty (1997), with its revelations both shocking and charming about her life; along with five more novels in her erudite fourteen-book mystery series (still published under her “Amanda Cross” pseudonym). Eventually, however, her identity as a Columbia University English professor was ferreted out by an ambitious grad-student researcher.

Then her life took a different turn. She began reading in an area new to her: writings about science (“physics, evolution, the grandeur of Darwin’s life and thought”). Not that she understood everything, she admitted, but “For me, one of the chief comforts of science lies in its abandonment of God” (WRB).

Yet she was also drawn to poet-priest Gerard Manley Hopkins (1844-1889), identifying with him in what she saw as her own “chief despair.” As Hopkins had written, she felt herself to be “Time’s eunuch, [not breeding] one work that wakes.” Heilbrun, from a secular Jewish family, was unable to affirm for herself the closing prayer of Hopkins’s sonnet: “O thou lord of life, send my roots rain.” Her scientific reading now underscored her lifelong agnosticism.

Still, there was a Christian in her life who cared about her—Tom Driver, professor emeritus at Union Theological Seminary. She was referring to him when she wrote: “My oldest friend, who believes in God, formulates the problem for me. Why do so many scientists, even Stephen Hawking, sooner or later invoke the name of God? Why did the mathematician John von Neumann turn to Catholicism at his death? . . . Ritual and community, worship and holidays, are essential to many, but not to me— and the scientists bolster me in this” (WRB).

So what future did she have? “I shall probably not attempt to publish a book about the men of science. . . . Is that, I ask myself, because, were I to attempt to publish, I would have to fear rejection? Yes, there is that, but not as much of that as there might be. . . . Wallace Stevens’ Sunday Morning, though he too died a Catholic, expresses perfectly my final religious conviction, which was probably Stevens’ first, ‘We live in an old chaos of the sun'” (WRB).

“Is the end of the journey now near? I fear living with the certainty that there is no further work demanding to be done.” [And, quoting another author], ‘Finding yourself . . . at the bottom of a hole in almost total solitude, and . . . To be without the slightest subject for a book'” (WRB). That remained her chief despair. So, although in good health, Carolyn Heilbrun left her husband, two daughters, and a son with only a brief note: “The journey is over. Love to all.” Their loss is ours as well.

Women’s Review of Books (WRB), Carolyn Heilbrun’s essay, “Taking a U-turn: The Aging Woman as Explorer of New Territory,” written for the Review’s special issue on aging (July, 2003) and published just a few months before her death.