Years ago, when I used to backpack in the beautiful Cascade Mountains in Washington, the uphill trail was often unknown and physically and mentally demanding. Yet even with my heavy pack, I kept going because I could not — would not — stop until I reached the top. There would be no giving up until I could look out over the other side.

Moving up the trail, I would talk to myself: “One step at a time. One foot in front of the other.” Sometimes a friend up ahead would look back and shout words of encouragement: “Come on, you’re doing great!” At the top I felt tired, proud, relieved, renewed in spirit, and rewarded by the beauty of what I had discovered. The other side of the mountain was spectacular. Then I would turn around and look back at that long trail I had just conquered, and I’d say to myself, “Yup, I did that!”

Aging is a challenging climb

I think of aging as being a lot like that — one challenge, one uphill climb after another, with lots of self talking about “one step at a time.” But wow! Has it been worth doing! Like most people, I have made mistakes, taken wrong turns, and have regrets about some parts of the journey; but I have learned to forgive myself without making excuses. And I’ve kept going because I’ve always had the courage to take on new challenges. When I was a child, my mom told me that she knew I could do anything I set my heart and mind to, and I believed her. I believed in having high goals and working toward them with the same determination that it takes to climb the mountain trails. Now I look back on my five careers (military, missionary, educator, counselor, administrator) and say to myself (with satisfaction and pride, I confess), “Yup I did that!” And I’m so fortunate to have had friends and a life partner along the way who have said, “Keep going; you’re doing great.”

Somewhere in my youth experiences, I became aware that to have a sense of well being and happiness I needed four things. I needed to have (1) something worthwhile to do, (2) person(s) to love and care about, (3) a sense of belonging, and (4) hope for the future — something to look forward to. Later, when I became a trained professional in education and counseling, those four important truths became my articulated personal philosophy not only for my own life but also as the basis for successfully working with students and clients. They had those same needs. When any one of these essential truths was missing in my life, I would do whatever I could in order to make it true again. Now that I have “passaged” into this later time of my life, I find that nothing has changed; these four dimensions still define what brings a sense of enjoyment, inner peace, and feeling worthwhile.

Spiritually, I have many, many, more questions than I have answers. As I get older I have learned to live at peace with the questions. My spiritual anchor holds on to Micah 6:8 and is the verse that I return to often. When I am loving mercy, doing justice, and walking along humbly with God, I know my life continues to be a spiritual journey.

Nowadays when I look in the mirror, I see an aging image that is incongruent with my perception of myself. I know my 75-year-old body is steadily “hiking” toward old age and I can’t stop it. And it’s carrying the real me right along with it! But my perception of self and my spirit have changed so little. I still value a sense of humor, belief in excellence, compassion for others, determination to have fun, and love of a challenge to try to understand and do new things. This is theme that I know, and this me is all intact and always keeping busy!

There are so many things that I haven’t had a chance to do yet — so much to learn. So who knows what side trails I might take before I reach the top! I always thought I would like to be a Senator, but since I’ve been too busy to do that I guess it won’t happen now. But who knows? I’m sure there are still surprises in store. 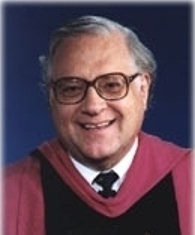 Anne Linstatter
by Anne Linstatter Let it be known that one man on the evangelical side of the fence spent a lifetime working to give women access...